Often, when I meet someone for the first time, or I’m getting to know a new friend, the moment comes when they notice the ring on my finger and congratulate me. Then, naturally, something along the lines of, “When did you get engaged?” usually follows. “Almost five years ago,” I say now. The answer has changed over the years — but even when it was “two years ago,” it seemed kind of long.

Sometimes people look at me with wide eyes and confused expressions; sometimes (less often) they respond without skipping a beat. But I rarely feel like I don’t have to offer some kind of explanation at all, because, I admit, it’s a little unusual. It seems to imply that one (or both) of us has cold feet, or some other resistance to moving forward, but really, neither is the case.

After my boyfriend Jim and I had been dating for a while, I was sure I wanted to marry him, and I felt excited to make a commitment that would solidify our future together. Another thing I was pretty sure of was that I didn’t need there to be any kind of surprise element to our engagement — this was something we were deciding on and doing together, and I wanted our engagement to reflect that. We started having conversations about it. Around the three-year mark, those conversations became more frequent and serious, and before going home for the holidays, we decided to get engaged. Another significant factor in the timing (though I’m not sure whether we actually talked about it, or whether it was just understood) was that my father was sick with cancer, and we wanted him to know our plans, if the worst should happen.

“It seems to imply that one (or both) of us has cold feet, or some other resistance to moving forward, but really, neither is the case.”

Jim gave me a ring that we’d decided on together when we exchanged gifts at our apartment that December. (Later, it would be swapped for my grandmother’s engagement ring.) And then, we started sharing our news. Everyone was happy and excited for us, but as word spread to more family members and friends, with it came the one question I somehow hadn’t given much thought to: “When do you plan to get married?” I was genuinely surprised to be asked this. We both were.

I don’t know what it says about us that we hadn’t considered that our engagement might be followed by the expectation of a wedding. Even if we had considered it, I’m not sure either of us would have been prepared for the pressure that sets in almost immediately.

I wasn’t the kind of little girl who dreamed about my wedding, but I always liked the idea of old-fashioned traditions like promise rings, pins pinned to sweater lapels, wearing your partner’s jacket, and so on. I now see that what I really liked about those things was just the promise aspect.

Of course, other issues also factored into our decision to stay engaged for as long as we have. In the subsequent months after our engagement, my father’s cancer got worse, and he died sooner than we’d been expecting. This was followed by months of intense grieving and a lot of family togetherness; planning a wedding — or “planning” of any sort — took a backseat, as we all adjusted to life without my father in it.

We were also simply indecisive. At once, I snubbed suggestions of getting married at City Hall because I felt that if I was going to bother with a wedding, I wanted it to include everyone I loved. But on the other hand, neither of us was (or is) terribly interested in committing the time or money it would take to plan an event like that.

Then came graduate school; the book I started to write, which became an all-consuming project; and all the regular things — jobs, friends, family, trips, fun — which is to say, life. Life got in the way. But we were okay being in limbo because getting married felt like the icing on the cake, and the cake was enough. (I know, I know, it’s a little much.)

I wanted the promise to build a life together, to move forward with this other person, to be eternal partners in crime. Once I had that, once we had agreed to these things, I realized it was all I really needed. Having an actual wedding or a document that declared us legally married? Entirely secondary.

Perhaps we would have been better off had I worn Jim’s letter jacket (or more realistically, his flannel) or pinned a heart-shaped pin to his lapel. If I were giving advice, I might say, wait to get engaged until you’re ready to plan a wedding. But then again, maybe I wouldn’t — it’s worked out just fine for us so far. I think we will probably get married one day, though where or when or how, I’m not sure. After all, we’re not in any rush. 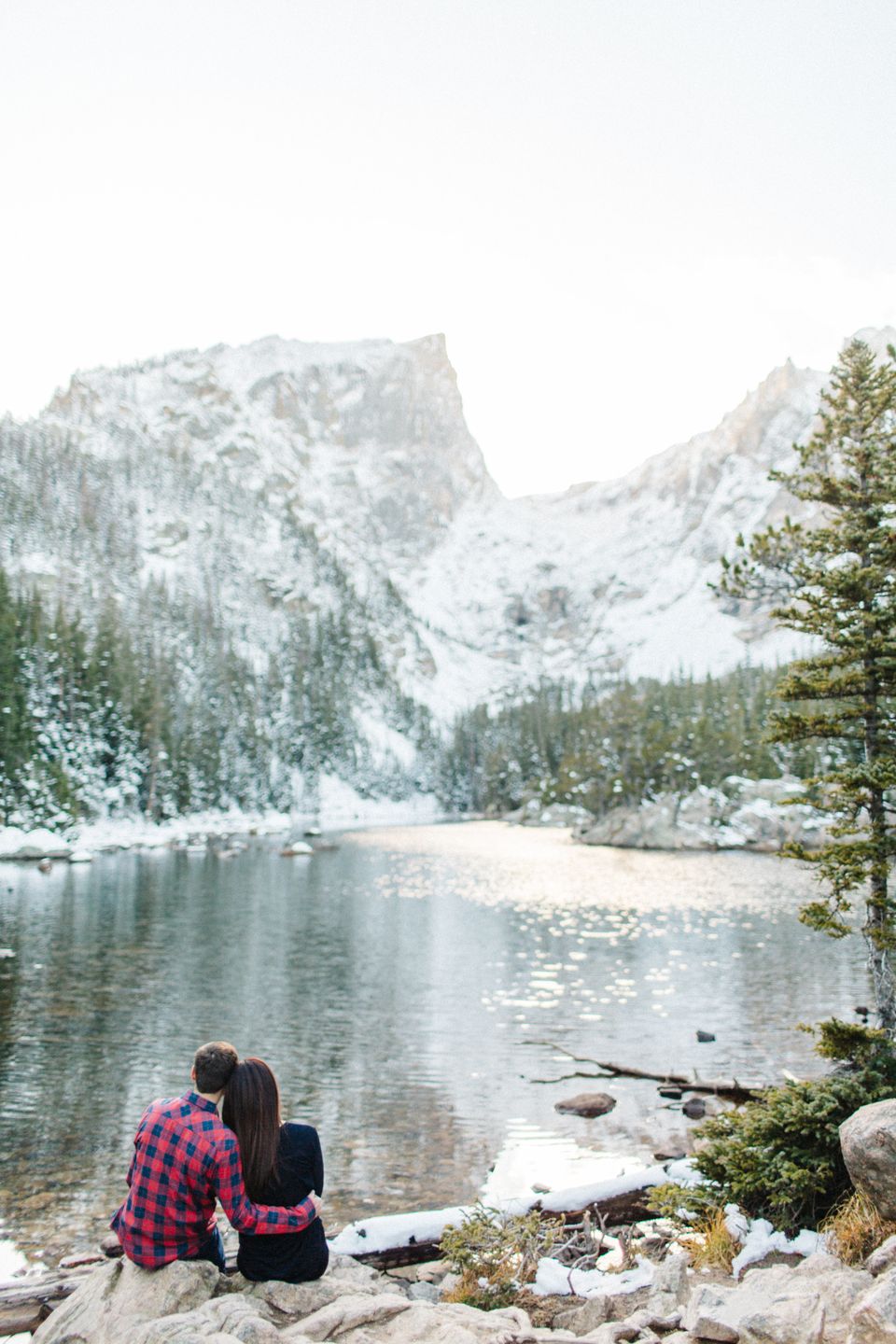