In a move that surprised many sports parents, last week the USTA, NFL, MLB, NHL, NCAA, U.S. Olympic Committee and three dozen other leading sports organizations joined forces to speak out against the popular "early specialization" trend in youth sports, where children under 12 focus intensively on one sport, at the exclusion of others, year-round.

In an ad that appeared in SportsBusiness Journal, a leading trade journal, the group highlighted the risks of early specialization in developing bodies and encouraged instead a multi-sport approach, which "can lead to better performance, less burnout, less social isolation, and, most importantly, more lifelong enjoyment in sports." 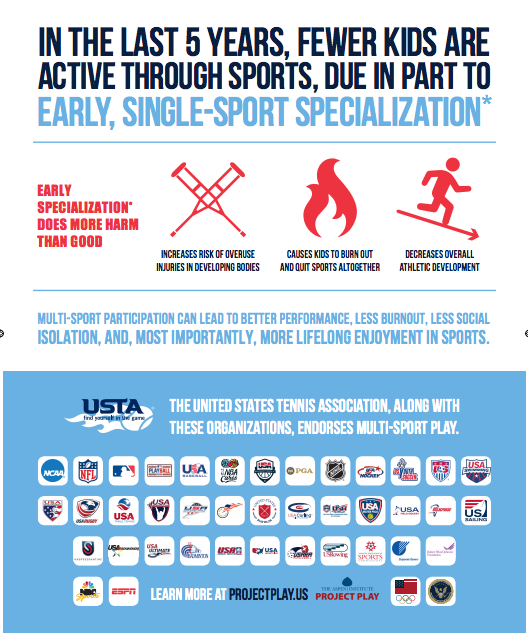 "We hope that by coming out and saying multi-sport play is really what's best for children, that parents and coaches will be better educated and will end this growing trend," said Sue Hunt, chief marketing officer at the USTA, which spearheaded the ad. "Early specialization and winning is really about the parents," Hunt told me. "The kids just want to have fun."

Each year an estimated 30-40 million children play youth sports -- but it's a different game than their parents played. Gone are the days of casual after school pick-up games. In today's competitive childhood, youth sports have become adult-led, professionalized and focused on winning, which has led an increasing number of children, some as young as 7 or 8, to specialize early to better compete.

"Sports have become another way for parents to keep up with the Jones, and it's damaging childhoods," said John O' Sullivan, founder of the Changing the Game Project, an organization focused on youth sports. He told me families who can afford it supplement practices with private coaching, anything for an edge that could one day lead to an athletic scholarship or a leg up on the competitive college admissions process.

Even parents who aren't looking to create the next Tiger Woods feel like they have no choice but to reluctantly buy into the trend. "The most common fear I hear among parents is that if they don't specialize early, their children will fall behind and never catch up," said O'Sullivan.

But does early specialization build a better athlete?

In fact, the well-rounded athlete may be the one most likely to succeed. Studies of college-level and Olympic athletes found that the majority of them played multiple sports growing up and did not specialize early. In a study published last year, researchers surveyed 708 minor league baseball players and found that only 25 percent of them specialized in baseball before age 12. In fact, those who specialized later were actually more likely to win college scholarships.

"Early specialization may enhance a skill but it does not enhance athleticism like practicing multiple sports can," said lead researcher Richard Ginsburg, a sports psychologist and faculty member at Harvard Medical School.

Research shows there are physical risks involved with specialization. In a recent study involving nearly 1,200 young athletes at two Chicago-area sports clinics, researchers found that those athletes who specialized in one sport for eight months or more a year (at the exclusion of others) had a significantly higher risk of stress fractures and other severe overuse injuries. Young athletes who played more hours per week of sports than their age (as in a 9-year-old playing more than 9 hours a week) were more likely to be injured, and athletes who spent more than twice the time playing organized sports than free play were more likely to have serious overuse injuries.

And then there is the emotional toll early specialization can bring. "I've seen the damage it can do to the parent-child relationship when a child thinks their parent's love is tied to winning," said O'Connell.

"We need to give sports back to our children," said O'Connell," and give them back the childhoods they deserve."

Here are tips for making sports a positive experience: