Have you ever felt you were losing your way? Cut adrift on a raging sea?

I know I have. When I was reaching the top of Honeywell, I was working 24/7. Having succeeded in turning around a series of troubled businesses, I was tasked with even more turnarounds. On the outside I appeared energized and confident. On the inside I was deeply unhappy but too driven to admit it. In truth, I was losing sight of my True North - more interested in becoming CEO than being a values-centered leader. Driving home one day I had "a flash in the mirror" and saw the real me. It wasn't pretty.

That day, I felt like Dante who began the Divine Comedy, "In the middle of the road of my life, I awoke in a dark wood where the true way was wholly lost." Thanks to that mirror, and the help of my wife and support team, I woke up and decided to rethink my life and career. This self-examination led me to Medtronic and the best 13 years of my professional life.

My personal experience suggests you can get back on track of your True North IF you recognize the signals before it's too late.

In Discover Your True North, I describe five behaviors that can cause you to lose your way: Imposters, Rationalizers, Glory Seekers, Loners, and Shooting Stars. Let's examine each of them: 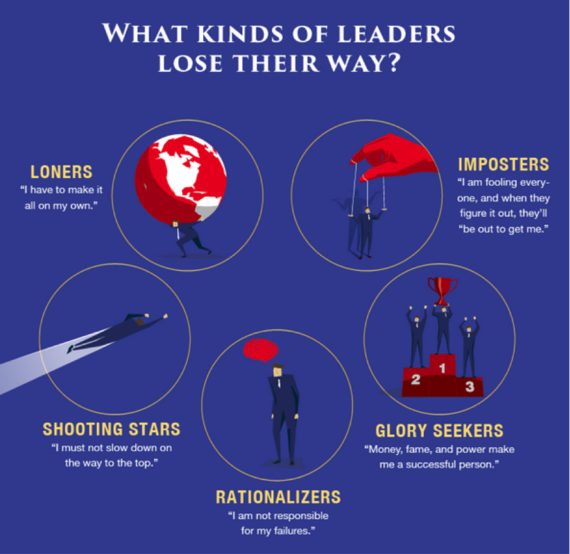 Imposters try to reach the top by pretending to be leaders. They are good at office politics -- too good. Aggression and paranoia become their hallmarks, and they'll attempt to eliminate anyone blocking their path. Outwardly, they follow the adage, "You have to fake it to make it." Inside, they are driven by the fear they aren't good enough and someone will unmask them as imposters. They rarely ask for help or admit, "I don't know."

Bob Nardelli had a highly successful career at General Electric, becoming one of three candidates to succeed the legendary Jack Welch. Disappointed he wasn't chosen as CEO, he moved to retailer Home Depot, lured by an enormous compensation package. Failing to spend time listening to store managers and customers, he never grasped the retail business. Instead, he centralized decision-making and reduced in-store support for customers. He terminated 70 of 71 vice presidents, replacing them with many ex-military officers willing to follow headquarters orders. As Home Depot steadily lost retail market share, its board replaced Nardelli with veteran Frank Blake, who restored the company and put it on a sustainable growth path.

Rationalizers are skillful in blaming others or external factors for their problems. Often they aren't willing to face reality, admit their mistakes, or see that their distorted view of the world puts their organizations in jeopardy.

As CEO of General Motors, Rick Waggoner never could face the reality that his company's drastic decline in market share - from 50% to 18% of the U.S. market - resulted from making cars and trucks that didn't measure up to GM's competitors. Instead, he blamed high gasoline prices, government regulations, and GM's unions. Unwilling to look himself in the mirror, he eventually led GM into bankruptcy.

Glory Seekers are so hungry for fame and public adulation that they deviate from their values just to get ahead.

Lance Armstrong created a great narrative for his success: seven-time winner of the Tour de France, cancer survivor, and philanthropist with his Livestrong campaign. An extraordinary cyclist, he elected instead to cheat, using illegal performance-enhancing drugs to win races. Ultimately, Armstrong lost all his Tour de France titles when he was found guilty of doping.

All leaders experience loneliness in their careers, often when they reach their peak. People in high-pressure positions often retreat to their offices rather than listening to subordinates and trusted confidents. That's when they are prone to make big mistakes.

As CEO of Lehman Brothers, Richard Fuld refused to listen to his team members or outside confidants. Treasury Secretary Hank Paulson warned him forty times that Lehman was deeply overleveraged and need to raise capital. When Paulson asked the major banks to develop plans to salvage Lehman, Fuld stayed in his office, in denial about his firm's troubles. When Lehman declared bankruptcy three days later, employees lost their jobs, customers lost their holdings, and shareholders lost their investments. As a result, the financial markets plunged into crisis and the entire country had to pay for Fuld's solipsism.

Shooting stars are so focused in climbing the career ladder that they have no time for their families and friends. They crave success and get lost in unsustainable frenzy of work. They leap from job to job without learning from their mistakes or gaining self-awareness. Ultimately, they cannot sustain the pace, as even the most energetic people run out of steam. When they crash, they come down fast.

Silicon Valley shooting star Mark Pincus initially soared with gaming company Zynga. But the company's faddish products were unsustainable. As he reflected later, "I did every horrible thing in the book, just to get immediate revenues." Because its leaders failed to create sustainable business models, Zygna's star came crashing down.

If you are aware of your vulnerabilities and stay laser-focused on your True North, you won't fall into these traps. If you develop self-awareness, build your support team, and follow your values, you can stay on track and avoid these pitfalls.

Bill George is Senior Fellow at Harvard Business School and former Chair & CEO of Medtronic. Learn more about this topic in Chapter 2 of his new book, Discover Your True North.