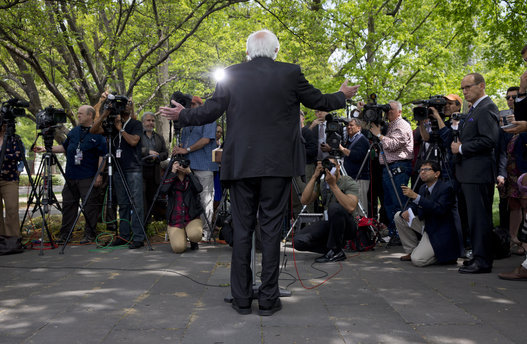 Libertarians across the country are facing tough decisions this election year. Sen. Rand Paul (R-KY) was supposed to inherit his father's libertarian-leaning movement in the GOP, but flopped out of the primary last month, barely making a blip in national polling and shining only a few times in the debates. He also never rallied the enthusiastic support his dad had, especially from millennials who craved a new conservative way. So now libertarian-minded voters could turn once again to the Libertarian Party -- and their presumptive nominee, former New Mexico Governor Gary Johnson -- but the vote would be (as always seems to be the case with third party candidates) largely symbolic, as Johnson only received 1 percent of the popular vote in 2012, despite being perfectly qualified and the most credible candidate the Libertarians have ever run. Johnson also faces more opposition for the Libertarian nomination than in 2012 -- mainly from accused murderer/software pioneer John McAfee and failed television producer Austin Peterson -- and there is no guarantee he'll even be on the ballot in the general election, much less in all 50 states, depending on ballot access laws for third parties in each state.

So most libertarians are now holding their noses and considering one of the five remaining major party candidates. Some are supporting Sen. Ted Cruz (R-TX) since he's branded himself as a Washington renegade who believes in the Constitution, etc. But smarter libertarians see right through Cruz's charade -- he hasn't led any actual movements on the Senate floor for libertarian causes like Paul has (Cruz's one "filibuster" wasn't even real) and his constant support for "carpet bombing" the Middle East and social conservative positions shouldn't win him libertarian votes. There's also a movement to get libertarians to support businessman Donald Trump, but despite Trump's notable positions like opposing the Iraq War and being very pro-business, his rambling ideas of rounding up Mexicans and Muslims and building walls go against many libertarians' anti-statist beliefs pertaining to immigration and civil liberties. Then there's Ohio Governor John Kasich, who is so anti-libertarian he had the party kicked off the state's ballot in 2014 so they wouldn't ruin his reelection bid. And of course, former Secretary of State Hillary Clinton's support for the Iraq War, Wall Street bailouts and increased prison incarcerations make her the biggest no-no for libertarians on the list. Yes, there's only one major party candidate who embodies enough varied libertarian ideals this year, and who many libertarians (including myself in last week's Ohio primary) are supporting: Sen. Bernie Sanders (I-VT).

Now before everyone loses their mind with the usual knee-jerk reaction of "Sanders is a socialist," one must remember that progressives and libertarians actually share several of the same ideals -- our federal government needs to be drastically reformed in many areas and we just disagree on how to do it, especially when it comes to government oversight and economic policy. But there are at least five issues libertarians can find common ground with Sanders on without deserting their principles: 1) Sanders was against the Iraq War and opposes getting involved in more endless wars, acquiring the support of veterans and veterans in Congress, 2) Sanders is against crony capitalism and voted to audit the Federal Reserve, not only supporting Ron Paul's original legislation, but also Rand Paul's recent legislation -- whereas Cruz didn't even show up to vote, 3) Sanders is the only candidate who wants to reschedule marijuana and reform a broken/expensive criminal justice system that incarcerates more non-violent "criminals" than any other country, 4) Sanders is pro-civil liberties and opposes the NSA's domestic spying program as well as the Patriot Act, which started the whole damn mess, and 5) he is for the rights of people who libertarians also support -- gay people getting married, women making decisions about their own bodies and law-abiding gun owners having access to firearms. I mean, wow -- if someone was looking at a list of libertarian principles, this would check off plenty, and this is a guy who despite the delegate math and political establishment against him, has a better chance to win right now than Johnson.

Now I obviously don't expect other libertarians to agree with me -- hell, libertarians rarely agree on anything -- and there are certainly caveats for libertarians to openly support a "democratic socialist" for president. But even if Sanders somehow gets the Democratic nomination and is only president for four years before the establishment forces him out, if he'd be able to keep us out of more wars, audit the Fed, reform our criminal justice system, end the NSA's domestic spying program and protect the rights of all Americans in that time, that would still be a YUGE step in changing our country for the better, without his socialist, tax-burdening policies ever being enacted. With that said, if the general election turns out to be Hillary versus some GOP hack and Johnson, libertarians should vote for Johnson in a heartbeat. And if it's Hillary versus Kasich and McAfee, most of us will probably just punch our ballots in the face. Until then, I think the writing is on the wall for those who have paid attention and aren't afraid to try something new. Bernie Sanders, the longest serving independent member of Congress in U.S history, who has advocated for various liberal and conservative pro-people positions during that time, is the best libertarian choice in either of the major parties... for now.