My friend Katie was raised in a small California mountain community; she is far more easygoing than I am, which is reflected in our parenting styles. I recall her teasing me for reminding our kids for the 5th time not to run around the swimming pool. "Don't you think they heard you?" "Yes." I replied, "But someone is going to slip and get hurt." "Why do you think you can stop that?" I was stunned by the simplicity of her question. Momentarily confounded, I clarified, "If I remind them then there won't be an accident." She shook her head and laughed, "You really think you have that much control? God is in control." Wrong, I thought silently, it was my job to keep the plates spinning. My demeanor was so naturally intense I avoided caffeine, instead hyper-fueled by anticipating the need to take action and solve problems. Perceiving that I possessed a gift, the ability to "will things to happen," I never expected to meet an adversary I couldn't handle. When heroin infiltrated my carefully managed life, it became uncomfortably but undeniably clear, I couldn't conquer addiction for someone I loved. Although I still aspire to possess superpowers, there is something that has made the feelings of powerlessness palatable and it was initially, totally, undesirable: yoga. 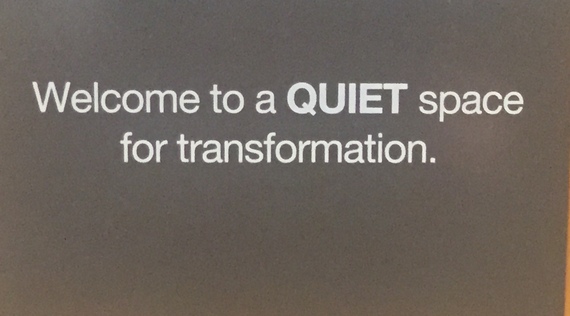 A few hours sleep, an occasional glass of red wine, hard core workouts while listening to heavy metal music, and Katie's prayers brought temporary relief from the unpredictability of sharing my life with addiction; from a mood swing to a life-threatening event anything was possible and likely. Functioning in stress overload left me suffering from insomnia and intense neck pain (later diagnosed as bone spurs).

My boyfriend continually recommended I try yoga, but the concept conjured visions of participants sitting in stillness and silent meditation, both of which were entirely unappealing and contradictory to my type-A personality. After months of his encouragement and the inability to normally lift my head off of a pillow, I attended my first class. I was challenged by the competing demands of listening, physically following along, and trying not to look too awkward. I left intrigued -- maybe yoga had some potential for me? 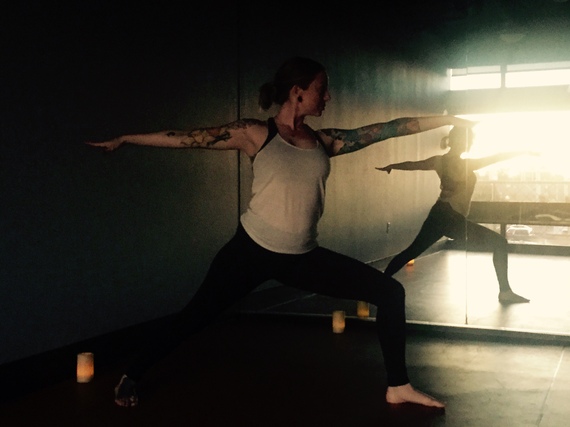 Maggie Townsley is building strength, endurance, and willpower in a Warrior 2 pose

During the second class, I appreciated the instructor sharing a personal story. Marissa Hamill, the manager of Core Power Yoga in Point Loma, California, explained that their instructors develop a class theme intended to create a connection. "Our teachers develop a message that is both based on yoga philosophy and applicable to modern life, and then weave it throughout the hour-long class." Focused on breathing, learning the nuances of the positions, and executing poses was demanding. Afterward, I snapped a picture of my tank top, not to share but because I was stunned -- I had never sweat through an entire shirt in my life. 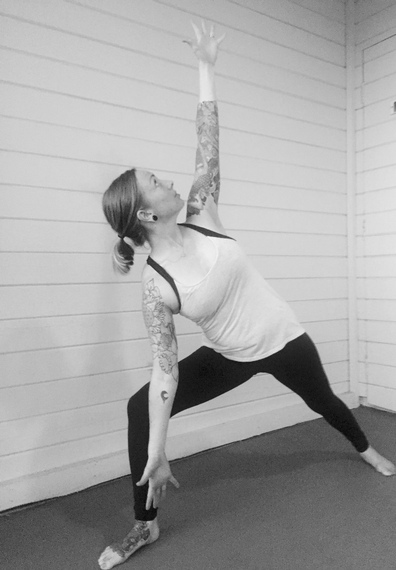 While following the sequences in class number three, I forgot about my "to do" lists, and the worries that had been omnipresent were unnoticeably quiet. The final minute of class is often referred to as the most difficult because of the final pose called savasana, the class lay motionless -- on our backs, palms facing upward with the humid heated air between us -- collectively basked in the moment of relaxation. The serenity was unfamiliar; in stillness sweat dripped from every pore, when I realized a tear (rather than another bead of perspiration) slid down my cheek. If it is so powerful, why not jump right into savasana? Marissa's characterization that most of us function in a state of fight or flight; with so much external stress in our lives, we are in high adrenaline mode most of the time. "The savasana state is what we are all seeking, but it is difficult to get there without the work. In vinyasa yoga, the magic is in how the postures are put together, the hour is cohesive. First warming the body to gain access to a wider range of motion, then moving through a powerful, challenging standing series, to finally cooling down, which is when you receive the benefits of your practice. After all the efforts towards breathing, focusing and moving, the relaxation is earned. In essence the hour is crafted to put the mind and body at ease."

It's now been about two years since that first class. Life has not become tranquil, but my thoughts are no longer dominated by anticipating emergencies; yoga reminds me to assess before "reacting." Is this MY problem? Is it in MY control? Since removing the illusion of power and relinquishing my authority over life, my neck doesn't ache when I turn to read the new "No Running" sign at the pool.