Tonight, I received one of the greatest compliments a person could ever give me. It happened unexpectedly at a small, semi-private gathering of dads who get together regularly to support one another amid various fatherhood endeavors. I had been invited to visit the group and say a few words about how mindfulness impacts fatherhood, so on the way to the gathering, I ran through several potential topics from my new book, The Dadly Way: 10 Steps to More Active Fatherhood and Equal Parenting. 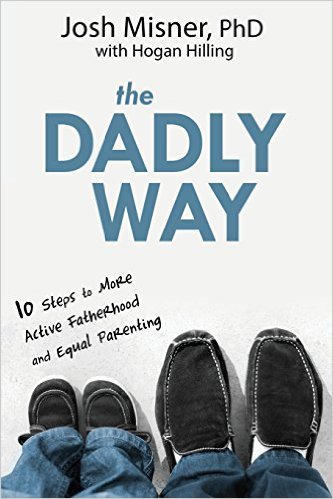 First, I thought about discussing the myth of father absence, particularly with respect to discussing how the stereotype of the "deadbeat or runaway dad" is quickly being destroyed by men all over the country, from all ethnicities and walks of life who recognize that their children deserve better than what they had growing up and desire nothing more than to prevent that from happening again to the next generation.

Then, I thought about talking to these men about masculinity, particularly about how it takes a lot of strength to build up emotional walls, brick by painstaking brick, but it takes a lot more strength to knock down these walls and make ourselves vulnerable, emotionally available, and compassionate with the ones we love.

Maybe, I thought, I could give them all a talk about EGO (Everyone's Greatest Obstacle) and how often our "manly" notions of pride get in the way of our best intentions.

Or, we could have talked about working with others--moms, care providers, educators, medical professionals, etc.--about what a "Father Friendly" environment could look like if we all worked together. In my book, we define Father Friendly as: "the open expression of value for the role of a father as an equally necessary parent, which is communicated through welcoming means that promote, nurture, and sustain fatherhood as a top priority."

I then briefly entertained the thought of discussing what my co-author and I refer to as the "parenting wars" and how frequently many of us end up sabotaging one another, one-upping each other, and embroiling ourselves in heated conflicts that inevitably only hurt ourselves and set a poor example for our children.

All these thoughts and more ran through my mind on the 30-minute commute leading up to the fatherhood group, but something unexpected happened when I walked into the room--something impulsive. As I listened to each father introduce himself and his week, ranging from young, inexperienced dads with young children to much older dads of adult children, I started appreciating each man's story for what it was.

Within each man's story, I heard love. I heard acceptance. I heard pure joy but I also heard agonizing suffering. What I heard above all else was a strong, impulsive, and nearly instinctual desire to be the best man each of them could possibly be on behalf of their children. I heard each man state in their own unique way how the only thing they each desired, above any other whim, was to be good role models for their children at any and all cost to themselves.

At that moment, the topic for the night became clear. As fathers, we are called to lead by example for our children, for better or for worse. My children are the mirror I hold up to my own life, and what I see playing out in their lives are reflections of what I have invested in theirs. This topic came straight out of the end of our book, from chapters 9 & 10, which discuss how the children are watching (even when we think they are not) and how our full and intentional presence in their lives are critical to providing them with the foundations they need to navigate all of the unknowns of life.

I then turned the discussion over to the dads and asked, "How do you see your children reenacting your behavior, but more to the point, do you like what you see?" Two hours later, the sun had set on our room and somebody had to point out to the group that it was dark. We had talked so much and shared stories so deeply engaging that we failed to notice that our light had faded, but that didn't seem to matter.

The compliment I referred to earlier? As we all got up to leave, one of the dads had the following to say:

"You know what I appreciated most about having you as our guest tonight? You shared your story, related it to the lesson, and then turned it over to us to hear our stories. Thank you for listening."

Of all the lessons that we as dads--as parents in general even--can demonstrate for our children and one another is that listening is more often than not the better half of communication, and furthermore, it is a skill that most of us could stand to improve.

For this writer, merely knowing that my one act of listening had a positive impact, even if only for a few hours among a group of fellow dads, was enough to make it one of the best compliments I've ever received.

More:
communicationParenting ParentsfatherhoodDads
Newsletter Sign Up
Raise the kind of person you'd like to know
Subscribe to our parenting newsletter.
Successfully Subscribed!
Realness delivered to your inbox