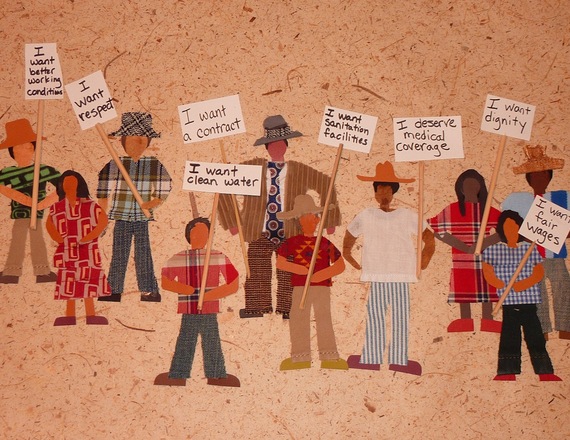 Have you been paying attention to the news lately? If so, I'm sure some of it has depressed you. Just as history has made us believe that the human race has made progress, reality will tell you the awful truth that we have not come that far at all.

Israel and Palestine are at war. Ukraine and Russia's quarrel have resulted in the murder of hundreds of innocent lives. Everyday the violent death toll in the West and South Side of Chicago increases. The police are still assaulting and killing Black bodies. An apartment building in NYC recently got approved to create Jim-Crow-like back alley entrances for low-income dwellers. The more things change, the more things stay the same.

But instead of cowering in a nihilistic corner, reformers, radicals, revolutionaries and ordinary people are trying to figure out what the hell can be done to rid us of the evil, the injustice, this awful mess -- a mess that sadly tends to define humankind more than our smiles and compassion towards each other.

Those in the "heart camp" will argue that what we need is love. Martha Nussbaum in Political Emotions: Why Love Matters For Justice describes how American and Indian political leaders undertook projects to inspire public emotions like love and compassion in order to achieve justice. She cites New York City's construction of Central Park to curb envy and unite people from different backgrounds as an example as well as Roosevelt's plan to elicit universal compassion through photography during the Great Depression.

For Nussbaum love is "intense attachment to things outside the control of our will." She argues,

If distant people and abstract principles are to get a grip on our emotions... these emotions must somehow position them within our circle of concern, creating a sense of 'our' life in which these people... matter as parts of our 'us.'

This can be done through rhetoric and public artwork. Nussbaum sarcastically states, "So the nations need these things [military thought, computer science, technology] but they do not need the heart?"

Martin Luther King, Jr. also believed that society needed the heart. He believed that "the gospel demands a tender heart." Guided by a Christian ethic, King argued that universal, excessive and dangerous altruism was sparked by love. For King, love could overcome darkness but hate is a journey that will bring us to destruction and damnation. The plea to love one's enemies is a solution.

King argues in Strength to Love, that loving one's enemy is the solution to the problems of our world. This solution can be developed through forgiveness, by recognizing the goodness of us all, and by winning the enemy's friendship and understanding not his defeat. The love King was referring to was not emotional bosh, it was "understanding and creative, redemptive goodwill for all." Love's antithesis is hate. Hate scars the soul. But love for King, is the only way of transforming an enemy to a friend.

Playing For The Other Team

I consider Nussbaum and King's work on love to be admirable and insightful. However, I am not of the heart camp. I play for another team. This is not to say that I am a hate monger or that I do not have hope in the human capacity towards benevolence. The love ethic is worrisome to me for several reasons.

Firstly, it is one-sided. When the love ethic is preached, it is usually targeted towards the oppressed. The sermons of King illustrate this point. It's the oppressed that should love their enemy as if they created the enemy relation in the first place. Similarly to the discourse around teaching women how not to get raped instead of teaching men not to rape, this call to love puts too much work on victims. It is those who are hated that must do all the work to win the love of those who hate them. This seems unfair. We must accept the bitter truth that as much compassion we want to have for those who practice hate, we must challenge them towards benevolence regardless of the emotional position of those they hurt or oppress.

For example, the location of Central Park geographically forces the lower class to meet the rich where they are and not the other way around. Although Nussbaum provides an ideal creation story of Central Park, the dirty facts are not revealed. In addition to 1,600 poor residents displaced and one of the most stable African-American settlements destroyed in the building of the park, Central Park's location between 59th and 110th streets has always been a place for the rich. In the 1860's, the park was not in walking distance for poor populations and six-hour workdays for the working class prevented their consistent attendance. If the poor were to be on equal terms with the rich through gatherings at Central Park, it would take much work on the poor's part not the rich.

Secondly, while Nussbaum's historical note of the use of government initiatives to spawn political emotions is insightful, I think such projects require conditions that Nussbaum doesn't quite address. What if the government doesn't care for certain groups of people such as undocumented immigrants, African Americans, or the working class? How do we then expect rhetoric and public projects to illicit care for these individuals? Such rhetoric and projects presupposes that the government loves all people and not just those who politicians identify with or those with the loudest voice or the largest finance contributions.

We can also get lost in universal language and think that the rhetoric and projects refer to us all. But unless this rhetoric also comes out of a respect for everyone, with proof that is not afraid of expressing specificity, these "love projects" will not achieve much.

Lastly, Nussbaum and King's love ethic also neglects the work of other emotions. While I do see the usefulness of love in certain contexts, love cannot be a doctrine of exclusivity. Love will not work in all contexts and therefore is not an end all-be all to our social problems. Shame and fear may work better in certain contexts.

For example, Anthony Appiah in The Honor Code: How Moral Revolutions Happen argues this point in noting that what ended such practices as foot binding in nineteenth-century China and what created backlash against Atlantic slavery was not love, but a human psychological need to be respected and honored. In other words, dueling ended not because enemies started to love each other but because the practice was no longer viewed as something honorable thereby shame and failure of recognition was punitively extended as a result of practice violations.

It could also be argued that what bought about the success of the Civil Rights Movement was not that Black Americans won the love of White society but that antithetical movements like the Nation of Islam presented a fear of a future world that White society did not want to embrace. Fear played a part in making King's dream a reality, not only love.

In addition, for philosopher Leonard Harris, people like David Walker, Lydia Child, and Henry Thoreau possessed character traits that could be perceived as being far away from the love doctrine. These figures were dedicated to human liberation and possessed traits like irreverence, guile, passion, and enmity. Under oppressive conditions, these figures found flaws in character traits like love and piety and believed that traits like enmity made possible the liberation of the subjugated and should be used only under certain oppressive conditions. While critics like Lisa Tessman may view these passions as "burdened virtues" and King may argue that they are not part of the Christian doctrine, I agree with Harris that these traits are due esteem and honor.

Harris' list of traits and emotions may not sound good. They may even come off as radical and will come with some risk, but this world doesn't just need love to heal itself. It needs accountability, righteous indignation, impatience, guile, a healthy use of shame, and even fear to put this world on a path towards justice.

Call it radical, unchristian, or call it tough love. But whatever you call it, don't just call it love. We need something more to change the world and we need it NOW!