For those accustomed to spring, summer, fall and winter, there are distinct changes in the air that trickle down into our way of living. For fall, the crisp air and transition to winter means we trade swimsuits for scarves, flip flops for boots and iced lattes for hot. Yet, this once socially acceptable behavior is getting some backlash from people now labeling fans of fall, "basic."

This new seasonal label seems most frequently targeted to women - those whose wardrobes include leggings and boots complemented by a Starbuck's pumpkin spice latte in hand. All this allegedly makes her a "basic bitch." 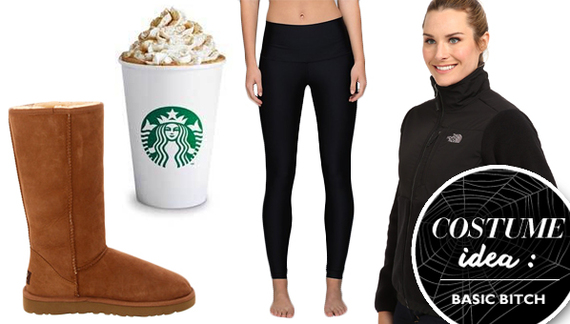 While I had an idea what this new label was implying, I fact-checked with urban dictionary.

I double fact-checked it with a Google search:

I'm sitting here, drinking a toasted graham latte, wondering when it became uncool to soak up the seasons. Some women playfully embrace this new "basic bitch" label, but I find it derogatory and petty. Here's why:

Fall wardrobe: It's redundant to call a woman's fall wardrobe basic, as in "obscenely obvious." It's basic that you're calling it basic. Boots, leggings and scarves have always been staples of chilly days, just as swimsuits and sundresses are staples of summer. Poking fun of these classic choices made based on practicality is forcefully trying to find humor in something that's really not all that humorous. Besides, ladies, do we really need another new label judging our appearance? No, we definitely don't.

Fall food and drink: The pumpkin spice latte draws headlines every year for its sought-after seasonal craze, while others openly express their disdain for it, accusing loyal fans as "basic." Fall flavors are so much bigger than this latte. Lovers of fall get excited about any recipe with pumpkin: pumpkin bread, pumpkin muffins, pumpkin brownies, pumpkin pasta, pumpkin cookies. We also do this in the winter with ingredients like cinnamon and nutmeg, chocolate and peppermint. It's cultural. Food is a big part of the memories we attach to our celebrations of the seasons. To imply that this is somehow unsophisticated or uncool is petty.

Some things that are mainstream become that way rightfully so - because they are good!

Fall celebration and tradition: Crunching leaves, walking through parks, holding a bonfire, browsing through pumpkin patches, or getting lost in apple orchards - these activities are not for everyone, but that doesn't mean they are "basic." They are fond memories in the making. If these classic outings do not sound appealing, you can still drink lemonade over cider and play video games over pumpkin picking. But remember, while you're spending time hating on fall, the very people you are poking fun of are the ones living in the moment and finding beauty in the season's offerings.

And finding beauty in the present moment is perhaps the furthest thing from basic. Actually, it's quite refreshing, isn't it?

While my opinion surely won't change the slang of our times, mostly because I'm getting too old for this stuff, if you're going to call me basic for my knee-high boots, pumpkin recipes, and apple picking, I will laugh it off. And as for everyone else: don't let anyone disapprove of your brand as being too different -- or in this case -- too mainstream. So long as you stay true to yourself, you will always be unique and beautiful in your own way. Embrace it.