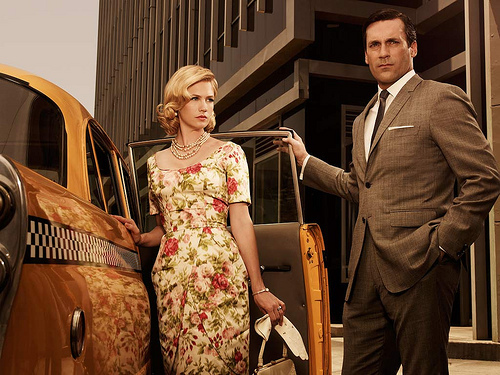 OK, I'll admit it, I'm depressed. As a former Madison Avenue executive, Mad Men was more than a TV show to me -- and I am going to miss it dearly.

But having spent the last 15 years of my life immersed in the even-more-maddening business of trying to reduce the number of gun deaths and injuries in our nation, I have also come to appreciate Mad Men in a completely different light -- one that I believe provides all of us who are committed to a safer future, with tremendous inspiration and hope.

Recently, I was on a cross-country flight to give a speech on the West Coast, which I had planned to write on the plane. Wanting to end on an inspiring note, I sat and thought about all the great reasons we have to be hopeful about the future.

The entire flight, the woman sitting next to me happened to be binge-watching Mad Men on her laptop.

Obviously, I couldn't help but glance at her screen from time-to-time and it seemed every time I did, there was somebody doing something that was considered perfectly normal in the period of the show, that would be considered reckless or outrageous or even ridiculous now, like drinking and driving, smoking on airplanes, littering, and absolutely nobody wearing seat belts.

Two scenes in particular stuck out:

The first was when Betty Draper found that her kids were playing "spaceman" unsupervised in another room. For a space suit, her young daughter, Sally, had put a plastic dry cleaning bag over her head. Betty calls her daughter, "Sally Draper come over here this minute." As Sally stares at her mother through a suffocation hazard, Betty warns: "If the clothes from that dry cleaning bag are on the floor of my closet, you are going to be a very sorry young lady." Sally then leaves the room, still wearing the bag as Betty continues chatting and smoking cigarettes with a pregnant friend.

In the second scene, the Drapers are having a family picnic in the countryside. When they finish, Betty picks up the edge of the blanket and shakes it off, sending paper plates, napkins and all sorts of trash flying everywhere. She folds up the blanket, puts it into their car and the family drives away, leaving the formerly beautiful scene spoiled by their litter, all without a second thought.

And then it struck me, what could be more inspiring than Mad Men? Not only as a great way to end a speech, but as a powerful demonstration of how much the world can change and how quickly that change can happen.

In less than a generation how many of the things we see on that show have gone from perfectly acceptable -- even glamorous or sexy -- to socially unconscionable? How many dangerous, reckless or harmful things that we used to do without second thought, are things we would not even consider doing now?

I have devoted my life to the cause of safety because I believe we have the same incredible opportunity to create the same lasting and fundamental change with gun deaths in our country -- where, a generation from now it seems just as ridiculous that:

The fact is, if we can just keep guns only out of the hands of people that every sane American believes should not have them in the first place, and inspire safe, responsible behavior around the dangers and risks of guns in the home, we can create extraordinary change.

Don Draper famously said, "If you don't like what's being talked about, change the conversation." That is precisely what we must do to address the problem of gun deaths and injuries in our nation. Just like all the other issues that have changed so dramatically in the generation since Mad Men, we have to start talking about solutions based on our common goals and values, like health, safety and freedom from fear.

Right now, in our nation, nine children are shot unintentionally every day and 30,000 people are killed with guns every year. Mad Men serves as an inspiring reminder of how quickly all that can change -- how, together, we can create a future where our kids and grandkids may only be able to learn about the ridiculous problem of gun deaths through history lessons -- or maybe a fantastic television show.

President of the Brady Campaign to Prevent Gun Violence