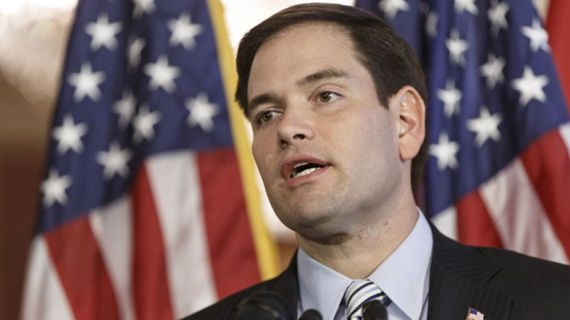 It's early in the campaign cycle, but it's never too early to speculate on who will win in 2016. Though most of my friends are "Ready for Hillary," I am confident that Marco Rubio will be the next president of the United States. Here's why:

Marco Rubio is handsome. The effects of physical looks on presidential elections are well documented. The most famous example was 1960, when John F. Kennedy was perceived by television viewers to have beaten Nixon in their presidential debate and radio listeners said Nixon won. Data confirms the importance of looks. Researchers at Princeton University found that the candidate voted as more competent-looking went on to win in 69% of the gubernatorial races and 72% of the Senate races. A University of California study quantified the effect of attractiveness at a 13% vote swing.

Marco Rubio is a young, handsome, attractive candidate who physically exudes a leader presence. For all the importance of money and policy on the outcome of elections, data seems to indicate that looks count for a whole lot. This will carry Rubio through the primary and help him beat Hilary Clinton in the general election.

Marco Rubio is a genuine conservative. In recent years, the Republican Party has found itself divided between its mainstream camp and its Tea Party element. We saw this stark contrast in the vote swings that dominated the 2012 primary race. Mitt Romney represented the center of the party, but constantly had to vie against contenders on the right - Rick Santorum, Rick Perry, and Newt Gingrich, to name a few - who claimed to be "genuine" conservatives. Rubio has held true to conservative values since he first ran for political office, relying on the strong history of Florida Cubans allying with the Republican Party. As a result, Rubio is a Tea Party favorite. A recent poll of Tea Party members showed Rubio as a heavy favorite for vice president with Paul Ryan leading the presidential poll. Now that Paul Ryan has declared he will not run for President in 2016, Rubio will be the favorite Tea Party choice.

Meanwhile, Rubio is a mainstream conservative with his core issues being immigration and foreign policy. In 2013, Rubio served on the Gang of Eight - a bipartisan coalition working on comprehensive immigration reform - and also represented the Republican Party in rebutting President Obama's State of the Union address. Rubio's ability to simultaneously appeal to both wings of the party makes him an impeccable unity candidate and the type of politician who can rally the party to beat Clinton.

Marco Rubio understands foreign policy. While competitors like Jeb Bush and Ted Cruz focus on brandishing their credentials on domestic policy, Rubio is taking the opportunity to brand himself as an expert on foreign policy. Whereas Jeb Bush has fumbled over questions about his brother's decision to invade Iraq and could not name the leader of ISIS, Reuters lauded Rubio's recent address to the Council of Foreign Relations as "a master class on foreign policy." Rubio - who serves on the Senate's foreign relations committee - linked foreign policy to morality and discussed an increasingly unstable world due to the United States' failure to create stability abroad.

Rubio speaks to many of the issues that are at the top of the minds of many Republicans who are disillusioned by President Obama's failure to lead. From the growing threat of ISIS, to aggressive leadership in Moscow, to a nuclear Iran and a Democratic Party whose relationship with Israel is visibly strained, Republicans are looking for a leader who will take the mantle of economic policy but also have the steel to stand strong against foreign powers and maintain U.S. leadership on the global stage.

Marco Rubio is Hispanic. Whether they admit it or not, voters tend to support candidates who are similar to them. A Stanford University study found that voters support candidates who look like them. "Despite the fact they don't consciously detect these processes, it affects their behavior. When the candidate looks more like you, you are more likely to vote for that candidate," assistant professor of communication Jeremy Bailenson said.

In their study, the Stanford researchers morphed the images of individuals with those of presidential contenders. "Those who had their photos combined with Bush gave the Republican a 13-point victory, while those blended with Kerry gave the Democrat a 7-point advantage," the study found. That's a 20-percentage point swing and it speaks to Rubio's natural ability to attract Hispanics to the Republican Party.

Of course, Marco Rubio has a Hispanic problem. My biggest criticism of Rubio is that as a Hispanic he does awfully little to help Hispanics. He has not taken a strong enough stance on immigration reform and has failed to distance himself from the mainstream Republican Party on amnesty for undocumented immigrants. This may be political survivalism at play because Rubio doesn't want to alienate the right wing of the party, especially in key primary states. Still, the majority of Republicans favor citizenship for undocumented immigrants already living in the U.S. If Rubio is to stay true to his Hispanic image, he needs to champion for Hispanic issues.

Marco Rubio in Young: Voters - especially millennials - are cynical about politics and tired of political dynasties. Voters are ready for new blood in the political system. Rubio is a young, vibrant candidate with new ideas and a fresh perspective. He is the type of new candidates that voters are looking for.