As one of the few remaining humans on the planet not on Facebook, I still like to give credit where it's due. I may loathe Mark Zuckerberg's time-sucking, TMI Internet sensation, but I can admire his business acumen and ambition: the guy's a billionaire. At an age when I was scarcely employed, living in my car and peeing into a Big Gulp cup in the middle of the night, he's Master of the Interweb. I also applaud his undertaking of a yearly personal challenge (okay, wearing a tie every day, not so much, but learning a new language is a solid goal).

That's about the extent to which I usually devote thought to Zuckerberg, until he made headlines last week for this year's self-improvement plan. After posting on his personal Facebook account on May 4th that he had "just killed a pig and a goat," the news attracted the attention of the national media. Last week, Zuckerberg said of his recent hunter/gatherer activities:

I think many people forget that a living being has to die for you to eat meat, so my goal revolves around not letting myself forget that and being thankful for what I have... this year... the only meat I'm eating is from animals I've killed myself. So far, this has been a good experience... I've learned a lot about sustainable farming and raising of animals.

Now that got my attention. As a longtime culinary educator and food writer, Zuckerberg appeared to be doing exactly what I've spent years educating students and readers about: learning where food comes from, and sustainable alternatives to industrial-scale production. I had to hand it to the guy. So I thought.

Anyone wanting to know more about the source of their food and how food production works -- be they carnivore or vegetarian -- is to be commended. And I've long believed that if we choose to eat meat, we should, at the very least, acknowledge that it was once a living creature (you would be surprised by how many people think meat comes shrink-wrapped from the grocery store, as if birthed by a Cryovac machine). Despite growing up on a ranch myself, I hadn't actually slaughtered any livestock until about five years ago. But I knew it was something I needed to do, for both my personal and professional growth, and I've since I've slaughtered a variety of livestock, all under the guidance of the farmer/butcher. 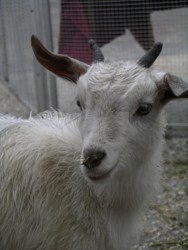 Yet it's not realistic to expect our mostly urban population -- the ones who overwhelmingly don't know where meat comes from, or at least how it's actually raised and processed -- to visit a slaughterhouse, or spend a day lopping the heads off of chickens on a farm. Zuckerberg is in a privileged position in that he a.) is wealthy, which tends to open doors, and b.) lives a few doors down from chef Jesse Cool, of Menlo Park's Flea Street Café. Cool has a long history within the Bay Area's sustainable food movement. She's taken Zuckerberg under her wing, and introduced him to local farmers, and according to CNNMoney, "advised him as he killed his first chicken, pig, and goat."

I respected Zuckerberg for his willingness to get closer to his food supply -- until I read that his "killing" has been limited to just that. CNNMoney (and every other online news source I looked at that addressed this part of the story) also reports, "the dead creatures go to a butcher in Santa Cruz, who cuts them into parts." I should add that it's legal for a farmer to slaughter and butcher an animal on their property, as long as that meat is not intended for public consumption. So, since Zuckerberg is allegedly taking said meat home and "cooking what he slaughters," there's no reason for the dispatched livestock to leave the farm to be processed.

Excuse me, but slashing an animal's neck doesn't make you a hero. Nor does it make you a poster child for "knowing thy food source." In fact, it kind of makes you morbid or a coward. It requires courage and yes, compassion, to take a life, even if it's that of a chicken. But the real emotional and physical work of slaughtering an animal comes from the skinning, evisceration, and breaking down of a still-warm carcass into recognizable cuts, and removing the organs for later use. It's watching an animal's life blood drain out (a necessity before you can proceed with butchering) into a bucket; plucking feathers or severing head from neck. It's plunging your hands between that animal's fascia and muscle, separating the two as you work the skin off the body, as if removing an undergarment.

None of this is pleasant, even to people who have spent their lives doing it. But it's profound, and fascinating, and gives you a reverence for meat that you can't get from just wielding a knife. For one so concerned with the taking of life, Zuckerberg doesn't paint a very convincing portrait. From a humane and technical standpoint, it's also not as simple as Cool makes it sound (and this could be due to editing or semantics, so this isn't a personal attack on her;): "He cut the throat of the goat with a knife, which is the most kind way to do it."

There is more than one way to skin a goat, so to speak. This is admittedly nitpicky, but bear with me: if you just willy-nilly cut an animal's throat, you risk severing the trachea. The result, says a farmer friend who also taught me how to slaughter sheep, is "unnecessary pain and suffering, because the animal can't breathe and aspirates on its own blood." There are other factors that come into play where humane animal slaughter is concerned, but for the sake of this piece, I'm focusing on this particular facet.

I mention it because, as various detractors of Zuckerberg's animal killing have pointed out, his actions may well encourage wannabes with money and connections to buy some livestock and "get in touch" with their food supply by slashing throats. Killing an animal for consumption -- whether you're hunting for conservation/subsistence reasons (I don't condone sport hunting or fishing), or slaughtering livestock, is not something to be taken lightly, especially by an amateur. Zuckerberg sounds as though he had an experienced coach alongside, but I'm making a point.

If Zuckerberg really wants to learn where his food comes from, he has a lot more work do to than wielding a knife for a couple of seconds. For those who don't have access to a farmer, chef neighbor, or stacks of cash, the best way to educate yourself about where food comes from is to read books such as Michael Pollan's excellent The Ominvore's Dilemma, visit your local farmers market, take a farm tour, or watch a movie such as "Food, Inc." If you can afford it, there are Farm Schools popping up across the country, where you can engage in a week-long, hands-on intensive in sustainable farming, as well as participate in a slaughter conducted in a respectful, academic, professional manner. Just don't brag about it on Facebook afterwards.

Note: To circumvent the inevitable flaming of angry vegetarians and vegans, the very personal decision of whether or not to eat meat is not the point of this editorial. If you don't like the topic, don't read it. Thank you.