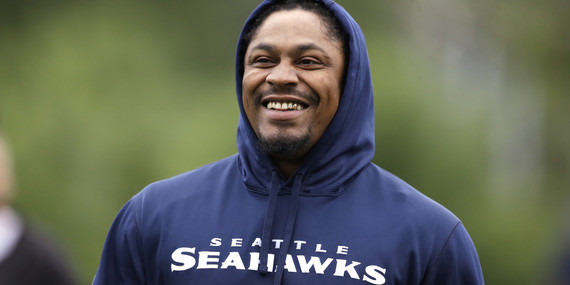 "The biggest message he's giving these kids, he might not want to admit it, is 'The hell with authority. I don't care, fine me. I'm gonna grab my crotch. I'm gonna do it my way.'"

Foote's point is kids will believe they can act the same as Lynch does.

Foote, in addition to others, have chastised Lynch for repeating "I'm just here so I won't get fined" 29 times during a Super Bowl media day interview.

Stephen A. Smith has been even more vocal than Foote, stating that "I think he should be getting fined $20,000 a day" because "you can't act like that." Smith also goes on to say that Lynch has a responsibility to utilize his national presence:

"Marshawn Lynch seems to me to be a very authentic brother...And instead of recognizing that, witnessing the kind of gift that he may have and how it could make a significant contribution to the lives of so many guys that aspire to be in his position, I find him instead to choose to be incredibly selfish."

According to Smith, not expressing oneself on a national stage is "incredibly selfish."

Apparently Stephen A. Smith and others who feel Marshawn Lynch is a detriment to America's youth haven't read UT San Diego's NFL Arrest Database. Since 2000, there are 778 NFL players on this database, and if you can get through it all, the NFL Arrest Database is a long list of criminal offenses attributed to NFL players. It consists of everything from "felony aggravated assault" and "domestic violence" to "driving drunk and crashing into parked cars" and "drag racing and resisting arrest by fleeing." Then of course there are the Ray Rice and Adrian Peterson scandals of 2014, in addition the almost two decade-old NFL cover-up of traumatic brain injuries.

If kids are negatively influenced by an NFL player's refusal to give an interview, what do they learn from the NFL Arrest Database?

But I digress, let's focus on Marshawn Lynch and his impact upon our youth.

Maybe Stephen A. Smith is waiting for A Gronking to Remember: Book Two, who knows?

"I picture being mauled by a huge monolith of a man. My body used for his hard pleasure; a stone god gripping me in his hands. He hoists me in the air. My clothes are ripped from my body, my quivering flesh open and available, my body ready to be used by the strong force of the universe, a ravaging, rampaging man. He brushes aside his loincloth. And then...out comes his stone pillar of a..." (9-10)

Gronkowksi also read a passage from the book on media day, further poisoning the innocent minds of young sports fans.

How will this impact young sports fans?

Moving on to other aspects of our puritanical, yet narcissistic culture, let's look at America's infatuation with sex tapes; a pastime that has hasn't eluded the NFL. Take a look at the VH1's A Complete Index of Celebrity Sex Tapes. It consists of over 12 pages of names, from Kanye West, Kim Kardashian, Paris Hilton, Hulk Hogan, and many other celebrities who've profited greatly from a video of their most intimate moments. With Paris Hilton and Kim Kardashian, hundreds of millions of dollars in reality shows and every other business venture imaginable have been created from their cinematic exploits.

What have young people in America learned from the Kim Kardashian and Paris Hilton sex tapes?

The National Felon's League judging another person's behavior is like Charlie Sheen running a drug rehab clinic or Jenny McCarthy giving a lecture at UNICEF about immunization. In fact, I'd rather have a million Marshawn Lynch's than one Jenny McCarthy, whose anti-science stance on vaccines inspired a recent Los Angeles Times article titled Jenny McCarthy: anti-vaxxer, public menace. Her national advocacy against vaccines also inspired a TIME article titled That Moment When You Must Have a Word With Jenny McCarthy. Seattle's running back might have offended the media, but at least he's not linked to the recent measles outbreak. There's no "body count" linked to Lynch's words (or lack thereof) and nobody in America has been harmed by the NFL All-Pro's desire to remain silent.

If anything, there should be a movement to commend people like Marshawn Lynch, not detract from his reluctance to abide by the media's thirst for controversy. Our nation has enough self-absorbed athletes and celebrities, do we need more? The airwaves are full of vapid controversies publicized by people like Stephen A. Smith, who ironically equate a lack of publicity with selfishness.

Ted Williams was famous for having feuds with the media and sportswriters caused Roger Maris to lose his hair. Michael Jordan has refused interviews with Sports Illustrated since 1993, the year their infamous cover with the words "Bag it Michael" appeared at newsstands.

Why must Seattle's running back be forced to engage in an activity that doesn't directly relate to his job description and one that has caused other athletes heartache in the past?

I want my son to know that when he becomes a man, not every authority figure is worthy of compliance or reverence. Sorry, but the NFL is not a police officer asking for your driver's license or a professor requesting a term paper. Lynch was fined $100,000 for not abiding by his contract, but I commend his decision to break a meaningless league policy and be true to himself. One's position in society, or within a corporation, doesn't equate with morality; Roger Goodell is living proof.

I also want my son to know that he should evaluate not only who is in a position of authority over him, but also if they've thrown stones while residing in glass houses. Not abiding by silly rules won't result in anarchy, if anything it fosters the creative spirit of people like Steve Jobs. Here is a list of 25 famous business tycoons who broke rules, yet profited greatly from moving beyond an agreed upon paradigm. Sam Walton once wrote, "I always prided myself on breaking everybody else's rules, and I always favored the mavericks who challenged my rules."

I guess Sam Walton wouldn't make it in the NFL. Of course, neither would Al Davis.

Marshawn Lynch is indeed a role model, specifically for not speaking in a world that overvalues the words of famous people. More parents should applaud an athlete who bucks the trend of self-promotion within a media obsessed and narcissistic culture. American society, and especially a scandal-ridden NFL, should be grateful for Marshawn Lynch. The day Stephen A. Smith applauds someone for not using the media to further his or her career, we'll be better off as a nation.