It turns out I stepped on a land mine with my last article. "Why I took My Wife's Last Name" stirred up quite a ruckus (I'm told it's called an "E-Brawl"). The responses were fascinating, insightful and at times emotionally charged. (You can read them here). I was instantly given x-ray vision into a heated controversy that's been smoldering away for years. I intended the article to be a sweet little love story, but it certainly hit a nerve bigger than the sciatic. And I get it. The decision whether to take your spouse's last name, keep yours, combine both or pick a new one entirely is an important one. Reading the comments, I noticed four major themes pop up repeatedly: gender, culture, identity and tradition. I thought--what interesting lenses (I am an eye doctor) through which to explore this issue. Though my favorite comments were the "saltier" ones, I selected the four that best illustrate each theme. My goal is not to identify a "right way" -- just the opposite in fact -- to give an overview of a few major factors shaping our "modern last name."

GENDER: "Hopefully she pays most of the bills, too."

Many comments cited the high level of independence women now enjoy in our society. As we all know, it's not uncommon these days for a mother to become the household's bread winner and for dad to become "Mr. Mom." I know one family where mom is a hedge fund manager and her husband (an engineer) quit his job to become a "stay-at-home" dad -- caring for the kids, buying groceries, cooking and handling all-things domestic. With greater economic and social equality, women are challenging age-old customs that were passed down over the centuries and no longer reflexively taking their husband's last name after marriage. I will put my money on an organized, straight-shooting, multitasking woman for many leadership roles. Most men just do not have that multitasking gene (along with the gene for noticing flowers when they walk into a room) and I look forward to the day when a talented woman becomes president of our country. 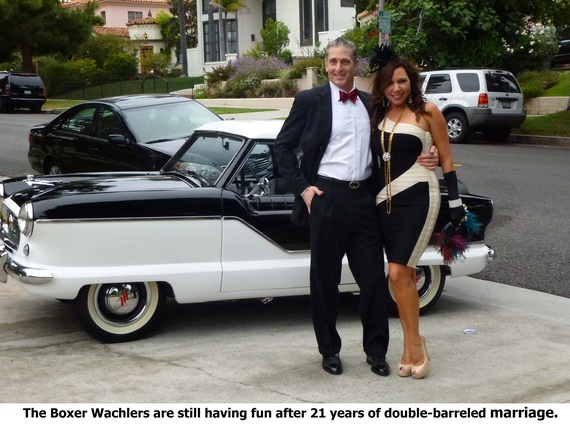 Traditionally, in Latin American countries, a child's name is a composite of the parents' last names. Some countries have (or had) strict laws mandating a wife take her husband's name. If Angelina Jolie had been born in such a country, she might have ended up "Angelina Jolie de Pitt." Many Latin American women object to "de" (meaning "of") arguing it implies wives are their husband's "property." Many commenters said they were legally required to take their husband's last names, but one experienced just the opposite: "Where I live, women are not allowed take their husband's name. Law changed in 1981 -- can't even pay to change it because the director of civil status has to approve it anyway, and it has to be a valid reason." As we meet and blend with new cultures -- both as individuals and society -- expect the diverse customs and laws of those cultures to impact the future of last names.

IDENTITY: "I believe in keeping your own identities."

Quite a few women remarked that keeping their last name was vital to their identity. "I kept my name... As my husband said, that's who you are!" One woman wrote. For many, surrendering a last name is like to waking up, looking in the mirror and finding a stranger looking back. Many factors shape how we identify ourselves and wish to be identified by others, which I call "perceptual intelligence."

Before 1839 in the United States, a woman essentially had no rights under the law, legally existed via her husband and always took her husband's name upon marriage. The legal rights of women began to shift after a series of laws passed beginning in 1839 known as the Married Women's Property Acts in the United States. (Okay, I had to research that -- I did not happen to have that handy in my brain).

Women posted about the importance of keeping tradition by taking their husband's last name. I even had to delete several piercing comments peppered with the F-bomb and C-bomb. And the debate continues. The practice of taking the husband's last name still predominates -- 50 percent of Americans think a woman should be legally required to take her husband's name and more than 90 percent of women abandon their maiden names. Interestingly, younger brides are increasingly taking their husband's surnames, according to Facebook data on active users in their 20s and 30s. One dissenting commenter wrote: "I don't like the historical precedence behind why a woman takes a man's last name. Not for me. I'm NOT his property."

With comments still pouring in, I realize I lit a firework thinking it was a sparkler. A word of advice: When your friends get married, don't bother advising them on their last name (that goes double for you mother-in-laws to be). It's just too complex a question with too many factors at play. I touched on four of the biggies -- but there are others -- like preferring the "sound" of your spouse's name; or those studies showing last names affect personality, spending, decision making, even shopping habits.

One humorous message sent to me was "When IS the next installment? Wives everywhere want to know..." Well, ladies, I do not think I am your man for a regular column or reality show titled, "Modern Life of Brian" for many reasons, one being this: A friend wrote in response to the article, "I now look forward to a new mantra in my house: 'Honey, why can't you be more like Brian?'"

From these articles, it is clear that I am pro women's rights, but I also want to avoid subjecting my male compatriots to domestic persecution.

On a personal note, my wife and I decided to combine each others names and create a new one, "Boxer Wachler," because of our love for each other and desire to build a new family. Our twin daughters take pride in the history of our name. What one does with the last name before saying "I do!" is very personal and often hinged with emotion as the tsunami-like wave of comments made clear.