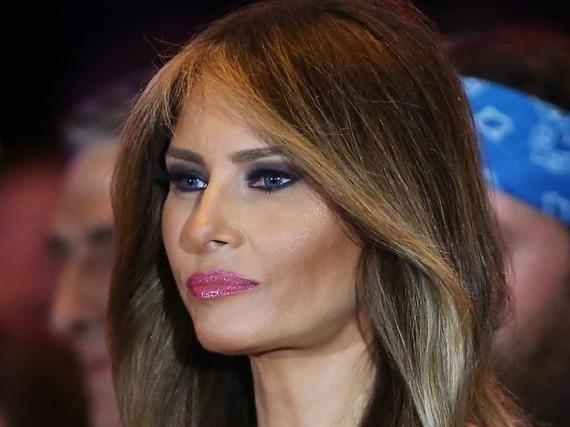 Last week I witnessed countless people, mostly straight men and women, express anger over the released nude photos of Melania Trump. They were outraged that people denigrated her for the pictures, taken more than 20 years ago. It was a blip in an already insane Season of The Donald, one that should be ignored and dismissed.

"These pictures have nothing to do with Donald Trump, and we should be ashamed of ourselves for slut-shaming this woman," a friend of mine posted on Facebook, adding "there is nothing wrong with nudity, and she was a model."

He's half right. But in this case the glass house is half-empty.

Anyone, gay or straight, who is slut-shaming Mrs. Trump for posing naked, or for calling her classless or a whore or unfit to be the First Lady, should probably take a good long look in their pornographic-viewing, sex-tape-making, prostitute-purchasing mirrors before judging others for "indecent" behavior. If you've even masturbated to photos of naked women or men you're a hypocrite to judge the subjects of your itch.

We gay men need to be especially careful in the criticism since we've been told pretty much all of our lives that flaunting our sexuality is wrong, sinful, that it's okay to be gay (when it is okay) provided we don't shove it in anyone else's face or ask for "special" rights or wear revealing outfits on Gay Pride Day.

Except when they are. Her husband, and her husband's party, and her husband's allies, have spent their political lifetimes demonizing gay people for the very same practices. This is where my own, mostly straight, friends need a brush-up course on the double standard gay people have been expected to adhere to since first announcing we're here, we're queer, get used to it.

Donald Trump has publicly called women fat pigs, dogs, and bimbos, and loves to rate them on a 1 to 10 scale -- women who are flat chested are out of luck. He defended his wife's photos as classy because, apparently, she fits his criteria of attractiveness, which alone should be enough to set off double standard alarms. But that's just the beginning of the body shameful.

In addition to garnering the support of Tony Perkins and the Religious Right, Trump's proposed evangelical advisory board consists of, among others, former Congresswoman Michele Bachmann and Focus on the Family founder James Dobson, elated of late that Trump had "found Christ."

Bachmann's vile anti-gay views have included, among other things, claiming Armageddon is headed our way if gays are allowed to marry, and saying that the federal ban on same-sex marriage gives consent for gay people to be legal sexual predators. She's an avid supporter of her husband's Gay Conversion Therapy practices, labeled a sham by mainstream doctors and mental health clinics.

Dobson calls gay rights "the fall of Western Civilization itself," adding that the "homosexual activist movement" is bent on "overturning laws prohibiting pedophilia." And Perkins, whose Family Research Council is listed as an anti-gay hate group by the Southern Poverty Law Center, supports David Duke, compares gay activists to terrorists and Nazis, and says, of homosexuality, "it's against God's plan and is contrary to our nature and the way we were created."

What does that have to do with Melania's nude photos? Besides the obvious "I'm guessing the people listed above wouldn't approve" argument, the photos include woman-on-woman action. Yep, that means gay, immoral, un-Christian, Armageddon, Nazis, terrorism, pedophilia, you name it (because they're not going to).

If any Democrat's wife or daughter had naked photos released, let alone naked pictures with another women, pretty much all of the GOP and the entire Religious Right would be screaming into their collection plates about the decline of those cherished "family values" conservatives are fighting to uphold every day that they look the other way when it's one of their chosen. It would be the scandal to last till end of days. Or at least the end of his campaign. Chelsea's breasts exposed? The whore doesn't fall far from the father's apple-sin tree.

The "If We Do It Jesus Will Forgive" Party can't have it both ways, as chastised gay people are still being told their kissing is repugnant and their open love shunned, witnessing their TV characters boycotted, their photographs censored, and the photographers of such filth punished, their grants and exhibits and even Facebook pages blocked and removed and revoked.

Adding to the unflattering picture is the new GOP platform, which even the Log Cabin Republicans call "the most anti-LGBT ever." It refers to Internet pornography as "a public health crisis," and adds, "We encourage states to continue to fight this public menace and pledge our commitment to children's safety and well-being."

Mrs. Trump's photos, which she has not apologized for, qualify as pornography. And no one in the GOP or the Religious Right has cried foul. Instead, we've been told we have no business mentioning these pictures; that we are being catty and callous. We should be quiet, once again. Because these little things don't matter.

The truth, in this case, is quite the opposite: We are justifiably criticizing a man -- yes, it's about the man -- and his Party who have, for decades, demonized women, gays, and anyone who rebels against their "Christian values," while turning the other butt cheek when controversy hits home. Melania herself is not a child and, despite what I keep hearing suggested, she willingly married this man and willingly entered the politics of a presidential race. Sparing her feelings when Trump is intent on destroying our lives is not a high priority.

If the press discovered that Melania Trump had an abortion 20 years ago and said she had no regrets, and the GOP and Religious Right ignored it while continuing their war on reproductive rights, my straight and gay friends would be in a rightful uproar. Melania Trump's photos fall under the same holier than thou category. We can't tolerate this double standard and it's our duty to call out the hypocrisy. It's not playing dirty, it's not being petty, and this is not a blip. It's sending a message that we are all equals under the law, and gone are the days when you can have your immoral cake and declare it unhealthy for others too.