How would you define "nude"? Most likely "naked," right? Well Merriam-Webster Dictionary has always included one definition of nude as: "having the color of a white person's skin." This narrow definition perpetuates the idea that white skin is the "right" skin. How messed up?

Merriam-Webster is the one of the most-used dictionaries in the United States and the only dictionary to include this archaic definition. DoSomething.org and its members decided that reference materials shouldn't hold Eurocentric biases, that everyone should have the chance to be represented in the nude! After all, research shows that deconstructing the beauty standard of white skin reduces colorism and racism, benefitting the confidence and overall well being of people of color (Phoenix, Aisha. 2014. "colourism and the politics of beauty." Feminist Review 108, no. 1: 97-105).

So on July 14 -- National Nudist Day -- we launched a campaign called Nude Awakening. (By the way, I created and QB'd this campaign as a (paid!) intern, which was awesome on a lot of levels.) Over 800 members flooded social media and the comments section on Merriam-Webster's "nude" page with demands like:

Hey @MerriamWebster, did you know you're the only dictionary with a racist definition of the word "nude"? Remove the third definition from this word to get with the times. #NudeAwakening 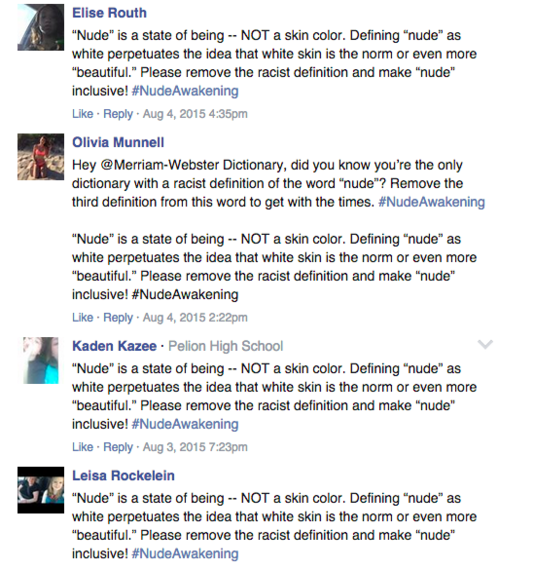 Merriam-Webster has a really integrated social media monitoring system, and they specifically monitor definition pages that receive a lot of attention. We figured if tons of our members posted on the social section of the "nude" definition (they did!), Merriam-Webster would see it and make change (they did!).

Yep, our members spoke, and Merriam-Webster listened. The dictionary updated its definition to "having a color (as pale beige or tan) that matches the wearer's skin tones." In an email, Merriam-Webster's Director of Marketing, Meghan Lunghi, said:

Our principal aim in our dictionaries is to provide definitions that are accurate and clear. In addition, we are attentive to comments from the public about our definitions, and recent comments concerning one of the definitions of "nude" led us to review current evidence of the word's use in the fashion industry.

That evidence showed that the existing treatment was in fact inappropriately narrow, so we recast the definition with language that accurately reflects the word's broader meaning while also indicating more clearly the contexts in which this sense occurs.

Here is the updated page: 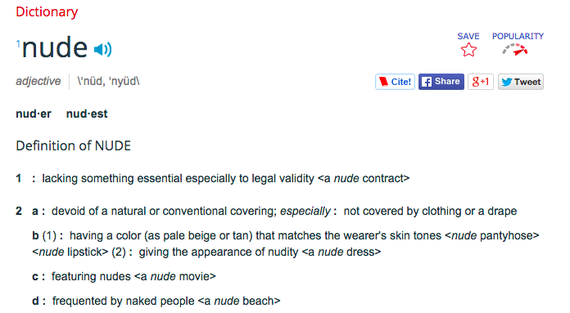 This may feel like a small win, but the language we use has an enormous impact on the reality we live. Plus, it shows that even a small but mighty army of young people can create racial progress. Here's hoping that army grows larger and mightier every day.

Join the movement against racial discrimination. Learn more about the Who's Next? campaign to speak out against police brutality in your state.

Luis Torres is a former campaigns intern at DoSomething.org and a sophomore at Ithaca College.