Michelle O. made the power statement of her political career yesterday, and she did it without uttering a word. The red dress that she wore on her first visit to the White House said it all, and it said a lot.

#1: It announced: I'm ready to be Page One, top-of-the-news-hour, insta-blog news. I'm dressed to pop off any web screen or any sheet of news spread.

There's nothing demure about a stylish red dress. Michelle was stating boldly that she acknowledged her position as The Top First Lady of The World bar none. Hear me Carla Bruni-Sarkozy--you've been surpassed as a First Lady force in the news, and yes, even as a force in fashion. 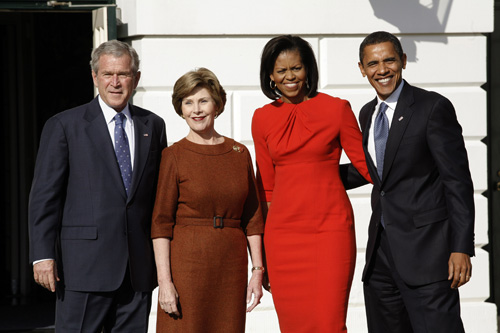 #2: The red was a not-so-subtle reminder that yes, she is a patriot. Whether she has an American flag tattooed to her forehead or not, there will be no further questioning of Michelle's feelings about her country. Yes, dressed in her favorite Chicago designer Maria Pinto, she is RED, white, and blue, so American through and through.

#3: She is powerful, but she is not threatening. There's no coincidence that Michelle chose a dress, not a suit. Ever since she began getting criticized, like many smart working women, because she seemed "too strong," Michelle has made The Dress her uniform. There's something about a woman in a suit that American men and women still find intimidating. A suit strikes them as too cold, too impersonal, and too ambitious.

All these perceptions are ridiculously unfair. They are unfair to all working women including Michelle. But the reality is that she realized that it wasn't worth fighting the battle of the working woman's perception while her husband needed to win the battle for president. It wasn't worth the distraction.

When she gave up suits for dresses, especially those shifts, her handlers also went on a campaign to reinforce her image as a mom versus an executive. It worked. Expect a lot more dresses--in fact, expect Seventh Avenue to be knocking off this fabulous red number in milliseconds. 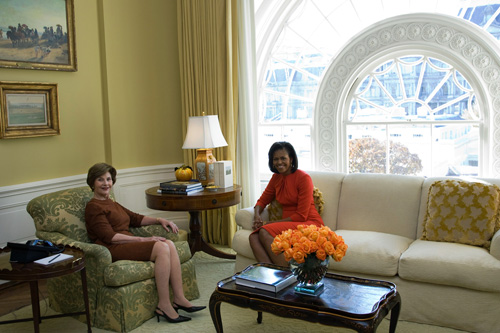 #4: She will be Barack's Best Friend and Life Partner, not his political partner. Her dress was too feminine, even too subtly sexy, to say that she'll be sitting in cabinet meetings-she wants you to know that that won't be her M.O. The red dress says she's stepping into the First Lady role, even if she does revolutionize it. I predict she will be the most powerfully activist First Lady since Eleanor Roosevelt with her chosen causes, but with the inspirit-ability of another stylish mother of young children: Jackie Kennedy.

Read more from Bonnie on Michelle O. -- she's twittering about it: twitter.com/bonniefuller.