The theme of my book launch party was "F#*& the Oscars." It wasn't meant to be ornery -- just campy, irreverent, and fun. It was, as one would imagine, held on Oscar night. A Joan Rivers impersonator greeted guests. There was an open bar and no shortage of the obligatory tiny quiches. 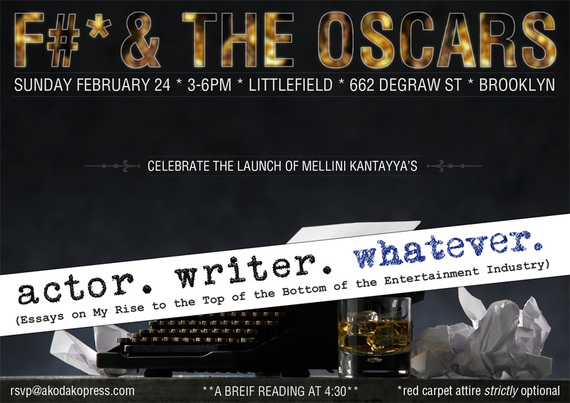 However, "F#*& the Oscars" is the exact sentiment some are expressing as not one performer of color was nominated for best or supporting actor or actress, as well as the perceived slight of Selma director, Ava DuVernay for best director.

Though this doesn't bode well for artists of color, the real loser may be the industry itself. Millennials are snubbing the Oscars, according to USA Today.

Despite the small spike the year Seth MacFarlane hosted, millennial viewership of the Academy Awards is low. My guess is this is not out of righteous indignation, but out of sheer boredom. When highlights are so readily available, why sit idle in front of the television (if you even own one) for three-plus hours to get to the scant juicy bits?

Millennials also don't have the movie-going habits of past generations. Studio executives scratch their heads and pull explanations out of their collective bottoms -- the desire for subscription pricing models, preference for streaming, and piracy being amongst them.

I wonder if they're missing the obvious -- the content.

Perhaps the out-of-touch-ness extends beyond the Academy Awards show to the industry it is celebrating. The Academy is 94 percent white, 76 percent male, with an average age of 63 years old. Whereas, most Americans are under the age of 63, 50.8 percent are women, and 37 percent are nonwhite. It shouldn't be shocking that there is an audience looking for content that isn't created by their grandpas.

While potential moviegoers may share a penchant for idiosyncratic white men and tortured geniuses, they may also enjoy female protagonists and films with casts of color involving themes other than slavery, civil rights, or race relations. Beasts of the Southern Wild is the only best picture nominee since the nomination of Ray in 2004 to fit that bill ( don't even with The Blind Side -- just don't).

The industry simply isn't creating content relevant to a generation who, according to the Pew Research Center, is the most accepting of the LGBT community, has the highest percentage of immigrant parents since the silent generation, the most likely to move out of the shadow of redlined suburbs and into racially diverse cities, and the most likely to marry someone of another race.

Overgeneralization of the characteristic of millennials is as overdone as Christmas pot roast and I am most definitely engaging in it here, but creating content relevant to the most progressive and diverse generation in America thus far is an economic imperative for the film industry and wholly necessary in staving its decline.