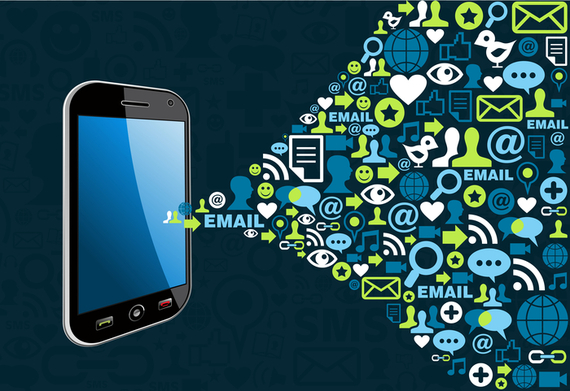 Ignore the naysayers--we're living in a world where smart phones are about to outnumber PCs. If you're a company that uses advertising in any meaningful way, you'd better buy your mobile cruise tickets before the boat leaves without you...

Last December, Benedict Evans tweeted and shared the chart below: 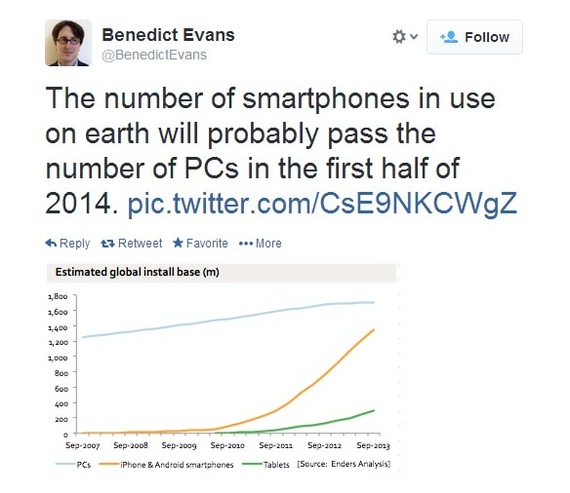 Evans' admittedly "rough estimate numbers" reveal that, as of December 2013, there are slightly more than 1.6 billion PCs still 'hanging out,' around 1.3 billion smartphones and about 200 million tablets. It's a pretty clear picture of things to come. Website owners would be fools to ignore what they've been seeing for the last three to five years: Traffic from mobile devices is slowly but surely taking what was once a monopoly away from traditional PCs.

What's surprising is that mobile advertising spend hasn't been keeping pace. In an article for The Atlantic Monthly in 2012, Derek Thompson laid bare a few telling facts:

Despite this being the age of the Smartphone, it's a strong indication that mobile still has a long period of growth ahead, due in part to the fact that many just haven't been taking the latest tech changes in stride.

Getting With the Program
I recently interviewed two people from the world of mobile. As with other "mobile marketing types," they agree that customer engagement and satisfaction are two powerful motivations to get pumping with the mobile scene.

"Part of what's driving people to learn more about mobile," says Bruce Molloy, Vice President of Customer Mobile, "is the fact that, especially when it comes to retail, there's a disconnect between the "front door" and the point of sale. Customers want to make increasingly informed choices, and it's the business of every marketer to give them those choices in the cleanest and easiest way possible."

Molloy believes it's important that these programs must provide a solid, "eco-system" from which marketplace can receive the best experience: simple to use, easy to understand and intuitive enough to push the customer to where they want to be with as little fuss as possible. It makes sense. No one wants to spend hours trying to learn how to use a mobile app. And when you want to buy something, especially if you have many choices, it's too easy to ditch one retail app and jump to another in search of what you want--just as it is to ditch a slow-loading website.

But it's not enough to provide what you assume are solid experiences. It's also important to measure them and know that they're solid. "Social media and Mobile are evolving at alarming rates," says Marc Fischman, co-Founder of Hyperactivate. "Attention constantly shifts to new platforms. Brands need to learn how to spread the word using apps and social media effectively."

One of the issues Fischman pointed out that's common to many marketers using apps and social media, is that they either don't bother or don't know how to engage followers, even when they have them. Fischman suggests that it's not just the message that counts, although that too is important. But it's also critical to measure engagement and promote your message in a way that creates viral reach. "First you've got to have the tools to catch the consumer eye," continues Fischman. "Then you have to learn how to make use of the results and continue to create engaging, viral campaigns."

In order to understand the trends, it's important that you understand the nature of the beast: diversity, quality, innovation, experimentation and influence. Only then can you chase consumer tails with an eye for scoring well within the medium. There's no way to cover everything within one article. But here are some pointers to give you a head's up from those who know.

Diversity: The smorgasbord of mobile tools make it almost impossible for failure when it comes to reaching your target audience. Don't choose one app or one method and assume it's the answer to all your needs. Before you invest in a pricey app, make sure if can be made to work for you, not the other way around. Use the right analytics, integrate your efforts and make it social.

Quality Counts: There are mobile marketing tools for every budget. This's why it's important to perform due diligence. The last thing you want is to put money into something that's nearly impossible to use or that doesn't work well. And don't forget to make sure your message contains a powerful call to action. Why should your audience make the purchase? What's in it for them? Discounts? Credits? Buy one get one free? Ask yourself--how robust is your message?

Accelerate Your Innovation: Mobile designers are running an Olympic race to leverage information and advancements in an effort to reduce complexity yet provide compelling services. You almost can't blink without seeing the mobile boundaries grow and change shape. We've heard it said--if you're not moving ahead, you're falling behind. Marketers need to keep their eyes on the innovative game, as well as on the way mobile is changing peoples lives. Every purchase, every 'like" and every share is a message. Listen and respond wisely.

Take the Experimentation Dive: Social discovery apps are leading the way for advertising and marketing innovation. The web is no longer built around the old "present and hope to sell" routine but has evolved into an internet revolving around individual needs. Click on a hotel website one minute and I'll bet you see an ad for that hotel on Facebook later. It happens to me all the time. CMOs cannot afford to ignore mobile marketing and advertising, especially if they're after the Millennial crowd. One effective type of ad for mobile is native advertising. These allow for the user to become considerably more immersed within your experience. An eye tracking study conducted by IPG Media Labs showed that consumers "look at native ads 53% more frequently than banners", and are also "more likely to share a native ad (32%) than a banner ad (19%)."

Content is Queen, Influence is King: Have you taken the time to learn about your audience? With more and more people learning how to use the web in a more personalized way, and with mobile poised to surpass television as our means for connecting with all media, it's vital to learn how your target audience experiences everything from life to relationships, and from entertainment to making purchases. We've come to rely more and more on other people's referrals and reviews. You have to ensure that people not only connect with your message, but pass it along, too.

Not having a mobile strategy is a "recipe for disruption", with a dash of eventual panic thrown in. The age mobile is still young enough for brands to get on board with it. That means larger budgets and greater focus on the road ahead. Even if print becomes less expensive as that medium tries to survive, that doesn't mean you ignore mobile.

Those who do ignore it may just go the way of the video tape machine, the record player, the 8-track and the cassette tape...