We Mormons often find ourselves explaining to people why we can't drink alcohol, coffee, or tea and why we don't smoke. It's part of a revelation that the prophet Joseph Smith had called "The Word of Wisdom" which is part of Mormon scripture. Although it was less stringently enforced in the nineteenth century, following the Word of Wisdom has become one of the main hallmarks of Mormonism and is a part of living worthily enough to enter a Mormon temple. But why? Is it just about health? And if it is, are Mormons healthier than the rest of America?

Here are the specifics of the Word of Wisdom as it is currently taught:

1. Mormons don't drink alcohol of any kind. The Word of Wisdom's "strong drink" has been interpreted to mean any alcohol, including beer and wine. Some Mormons are even careful about putting any alcohol into food where it will be cooked out. Or using flavorings like rum flavoring in a drink like homemade eggnog. It is a bit of a gray area in my understanding whether or not alcohol in things like chocolates counts or not.

2. Mormons don't drink coffee. There is some debate about whether or not decaffeinated coffee counts as coffee or not. My bishop told me when I asked some years ago that it did not. But most Mormons avoid not only coffee, but even coffee-flavored things from ice cream to coffee-flavored sports gels. While I was growing up, we had several coffee substitutes in our house, from "Postum" to "Pero," but I don't see many Mormons drinking them these days.

3. Mormons don't drink green or black tea (caffeinated teas). Again, some Mormons try to make sure they don't accidentally get tea in any other form, which can be more difficult than you might think now that green tea has become a "health food" and is sometimes added into other health items (including cold cereal).

4. Mormon don't smoke cigars, cigarettes, and they don't chew tobacco. The health risks of these habits have been known for at least half a century, but Mormons have avoided them much longer than that. Because of this, Mormons sometimes have a self-congratulatory attitude about the Word of Wisdom, sure that science will conclude that all other parts of the Word of Wisdom are as clearly health conscious as this one.

5. Mormons are to avoid harmful and addictive drugs, though these are not specified and are not meant to include prescription drugs of any kind, as long as they are used in accordance with a doctor's supervision and approval.

And here are things not specifically forbidden in the Word of Wisdom:

1. Caffeinated substances, including caffeinated soda, caffeinated sports gels or drinks, and caffeine supplements. Though there are certainly Mormons who think they are following a higher law when they avoid these substances and I'm not sure I've got great evidence to prove they're wrong. Nonetheless, I use caffeine while training and racing and also keep it in the car in case of having to drive home while sleepy.

2. Chocolate of any kind. I love chocolate, hot chocolate, chocolate ice cream, chocolate candies, just about everything chocolate. If you ever go to a Mormon pot luck, you will see plenty of chocolate.

3. Jello, which is consumed in Utah at higher than levels than in other states. We consider jello a "salad," however, which means it's not on the dessert table at ward events.

4. Sugar in general, which may be a kind of substitute for other vices.

5. Herbal teas. I have a wide selection of herbal teas in my house, and sometimes have to remember that other Mormons don't necessarily do the same and may misinterpret me when I ask them if they'd like some tea.

Is it hard for me as a Mormon to avoid these substances? Honestly, not really. I love the smell of coffee and have occasionally indulged in coffee-flavored ice cream. Alcohol has not tempted me since I was 16 and a friend tried to get me drink by feeding me a soda she claimed was a new peach flavor. I notice that I am a bit out of place in certain social events when I refuse an alcoholic drink, but these days there are so many other non-Mormons who have their own various reasons for avoiding alcohol that it's rare that I'm the only teetotaler in the room.

There are parts of the Word of Wisdom that are still under debate. Few Mormons are vegetarian (I am) and the scripture specifically states that meat is to be eaten "sparingly" except "in winter and times of famine." Other substances are not mentioned at all, including milk and fish. Grains are "the staff of life" and fruits and vegetables are to be eaten with "thanksgiving," though I've heard some strict Mormons interpret the Word of Wisdom to say that they should be eaten fresh only, in their season, and not dried, frozen, or canned.

The Word of Wisdom promises us that if we follow it, we will "walk and not be weary" and "run and not faint" and that we will receive "great treasures of knowledge" and that "the destroying angel shall pass them by." These are great blessings that we take seriously, though I am not always convinced they are meant to be literal or physical. When I was in grad school, I was considered a little crazy with my insistence on sleeping eight hours a night, never drinking caffeine, and expecting to still get through. I didn't get the best grades out of all the students in my year, but I felt I was healthier than most others because I followed Mormon rules.

Do some Mormons struggle with addiction even so? Yes, of course. Mormons fall off the wagon for various reasons and when they do, they are still welcome to attend meetings, but cannot qualify for a temple recommend until they are "clean" again. This is hardly the worst of sins for Mormons, though.

I know many Mormons, including my husband, who come from a strong family history of alcoholism and feel that the Word of Wisdom prohibition of ever tasting alcohol has probably saved their lives and possibly the lives of others, in addition to giving them a lifetime of happier lives due to freedom from addiction.

Are Mormons healthier than other Americans? Well, we do have one of the lowest rates of lung cancer, though we also struggle with mental health problems for reasons that are not entirely clear. Utahns have a low rate of obesity, despite the fact that we buy more candy than any other state. So are we healthier? Well, yes and no.

But I have long told friends I also think that a big reason that Mormons follow the Word of Wisdom is so that we stand out. We are told to be a "peculiar people," and refusing coffee, tea, and alcohol is often a conversation starter. It gives us a chance to be open about our Mormonism and invite a conversation about our beliefs, however deeply or shallowly we choose to discuss them with strangers.

It is also binds us culturally to other Mormons, who go through many of the same experiences that we do when outside of Mormondom. We talk and bond about funny stories we've lived through, trying to live our religions under the most difficult of circumstances. Missionaries in particular have hilarious stories about people they are trying to convert with a language barrier between them and inadvertently ending up with some forbidden item being offered them by a well-meaning investigator.

I see depictions of Mormons on television and movies regarding our taboos about alcohol and coffee and they often make me shake my head and laugh. Mormons don't think that these substances pollute our bodies in a way that can never be made clean again. There's a repentance process that's fairly straight forward if someone slips up. You won't be kicked out of the church for drinking coffee, nor will God consider you unworthy to ever be part of the kingdom again. The problem is more when it becomes an addiction and interferes with your willingness to be part of the body of Christ on a long-term basis. Or when it seems that habits are more important than worship of God.

Which isn't to say that I would minimize the effort that it would take someone who is used to these substances when trying to convert to Mormonism. One of the most courageous and amazing moments of my life was watching a friend pray again and again to be able to quit cigarette smoking so that he could be baptized into the church.

Many religions have strict health codes that make no sense to outsiders, but help the devoted feel closer to God by sacrificing a physical comfort. For Mormons, this is our way of showing our devotion and if it has an added benefit to health, that's a bonus to me. As a fitness nut, I really like the idea of running and not being weary, though I've yet to fully appreciate the rewards of that promise fully. I'm afraid I am weary a lot after a race, though I enjoy them enormously, especially when I get to share them with my family. 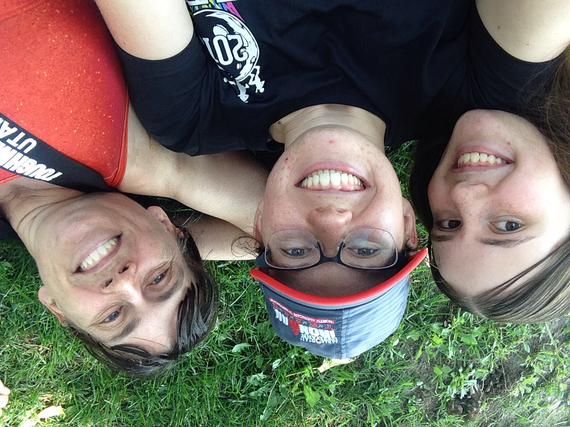