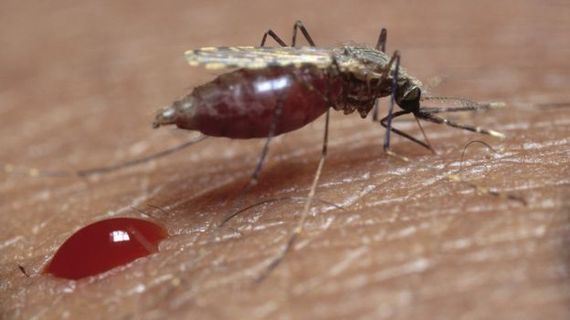 All of us encounter a pesky mosquito from time to time. For most people, it's little more than a momentary nuisance. A nip, a few days of itching, and we move on with our lives.

Many people don't get by so easily, unfortunately. Each year, mosquito bites lead to the death of an estimated 1 million people--more than the population residing in cities as large as Detroit or Geneva. Many, many millions of additional people get tremendously sick from mosquito bites, even though they don't pass away.

This widespread suffering is the result of mosquito-borne diseases - viruses and parasites that pass into our bloodstream when mosquitoes bite us. The most widespread of these diseases is malaria, but recent outbreaks of dengue fever and Zika virus--now confirmed to cause brain defects in infants--have brought renewed attention to the mosquito as a carrier and transmitter of deadly pathogens.

Accounting for this spread of disease, mosquitoes are actually--by a wide margin--the world's deadliest animal, based on the number of human lives they take each year. One mosquito alone can infect up to 100 people with a mosquito-borne disease.

This colossal danger buzzes around us disguised as a tiny nuisance. So, why are mosquitoes so attracted to us? Why are humans their meal of choice?

The short answer is they rely upon the nourishment provided by human blood to reproduce. The full story is more complex - and it's highlighted by a peculiar, distinctive relationship between humans and mosquitoes that has endured over centuries and ignited pandemics the world over.

Once upon a time, thousands of years ago, mosquitoes fed on other non-human forest animals. Evolution led certain mosquitoes to develop a preference for feeding on humans; an attraction which research has demonstrated is largely based on human scent. Driven by this chemical attraction, we slowly became not only a feeding option for mosquitoes, but also their meal of choice. Unfortunately for us, these same species carry dangerous human diseases.

The numerous species and subspecies of mosquito is a crucial bit of context. 3,500 species of mosquito exist worldwide, about 175 in North America alone. The distinctions between species matter a great deal - various mosquito species carry different pathogens and are found in different regions of the world. Several species, including many found throughout the United States, aren't known to carry any pathogens. Specifically, the Anopheles mosquito spreads malaria, while the Aedes mosquito carries dengue, yellow fever, chikungunya, and Zika virus.

These mosquito species are generally found in differing geographic regions. They have historically concentrated in the southern hemisphere and tropical regions, resulting in much larger burdens of diseases like malaria in places like sub-Saharan Africa and southeast Asia. The Africa region accounted for 88 percent of malaria cases in 2015.

Climate change, however, is shifting the range of mosquitoes--and the potential for spread of disease--further into northern regions. Aedes mosquitoes, for instance, are now found in southern U.S. states, making mosquito control and Zika prevention efforts a genuine domestic concern as the summer season approaches.

Gender plays another big role in the world of humans and mosquitoes. Male mosquitoes feed largely on nectar from plant life. Only females bite humans, as they need the proteins and other nutritional elements from the blood meal in order to produce their eggs.

When a female mosquito targets you for a bite, they look for a relatively thin section of your skin to pierce. Their proboscis, which resembles the "needle" that pierces your skin, is an intricate contraption. While it looks like a needle, the proboscis is actually two parallel tubes--one that injects mosquito saliva and a second that pumps blood back out. Mosquito saliva includes a numbing agent, buying the mosquito valuable time to locate a blood vessel before you can swat them away, as well as an anticoagulant to ensure the blood meal flows from the hapless human into the mosquito gut. Proteins found in the saliva trigger a response from our immune systems, which triggers the red, itchy welts that many people find themselves nursing afterward.

This two-way transfer of fluids is one of the most significant aspects of disease transmission. Injection of saliva can also lead to the transfer of disease-causing parasites and viruses from mosquitoes to humans. Crucially, when biting a person infected with malaria or Zika, drawing infected blood is also how uninfected mosquitoes become active carriers of the disease.

Yes, humans infect mosquitoes, too. The spread of mosquito-borne diseases is a cyclical progression, dependent on this unique relationship between humans and mosquitoes. The malaria life cycle for instance cannot survive without transmission of the parasite from mosquito to human and then from human to mosquito - which offers us tantalizing ways to prevent disease progression. 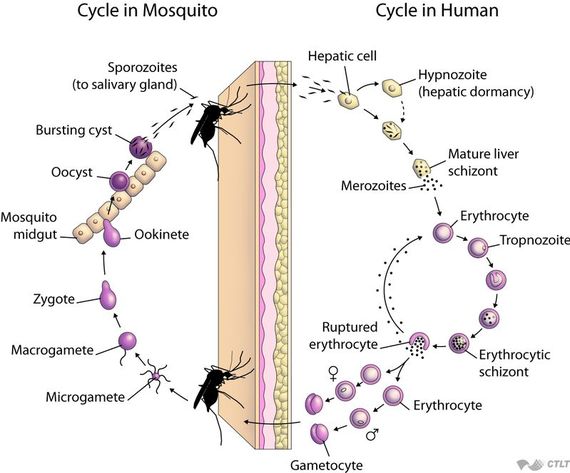 Mosquitoes and humans have engaged in this tête-à-tête throughout history. Building a deeper understanding of how we interact, both physically and biologically, is the first step to winning the battle.

As a malaria researcher, I spend my time thinking about this every day. The lab I work in is seeking to develop new vaccine candidates for malaria. We breed thousands of mosquitoes each week to drive our research and even house a facility to test vaccines that are administered though the bites of malaria-infected mosquitoes!

A long heritage of scientific discovery has helped bring us to the stage we are at today, where significant, life-saving steps forward are at our fingertips. In 1900, famed U.S. Army physician Walter Reed first discovered that yellow fever was transmitted by mosquito bite. At the time, bed sheets and poor sanitation were suspected causes of infection, and yellow fever was devastating areas of the U.S. south and up-ended the French effort to build the Panama Canal.

This base of knowledge helped to inform control efforts aimed at curbing the impact of mosquitoes. Initial control methods ranged from eliminating pools of water where mosquitoes can breed, rudimentary insecticides, and covering up of bare skin.

Over time, more sophisticated control and treatment methods have emerged. Insecticides and repellants have grown more effective and less toxic. Tools like mosquito bed nets and anti-malarial treatments have saved millions of lives. Now that we know mosquitoes are particularly attracted to humans based on scent, scientists are working to block their sense of smell.

These efforts to control mosquitoes and eliminate the diseases they spread have waxed and waned over time. Malaria, for instance, was eliminated in the U.S. back in the 1950s, but still persists today as a threat in more than 100 countries. Despite these noble efforts, the mosquito is a particularly resilient and adaptable foe. As they evolve, along with the diseases they carry and the world we share, our response must change with it. Zika is only the latest example of how quickly a mosquito-transmitted outbreak can occur with just a slight genetic mutation of a virus and a plane ride.

The answer to our mosquito problem isn't a simple one. Ultimately, a combination of control, treatment, and prevention tools, both old and new, will be necessary in order to stem the negative impact of mosquitoes. While the irony isn't lost on me that a desire to combat mosquitoes has led me to spend the better part of my days in their company, it's a thrill to chase down and share answers to these perplexing questions that have hummed around us for so long, often just out of reach.

Principal Scientist at the Center for Infectious Disease Research.