I was upset when I ordered cupcake-shaped truffles for my daughters for Valentine's Day, and they showed up late.

I was a super cool mom, however, when I produced a platter of cupcake chocolates after lunch on a cold, snowy, home-from-school Monday.

Later, I posted a picture of them on Instagram, along with a caption similar to this thought above. 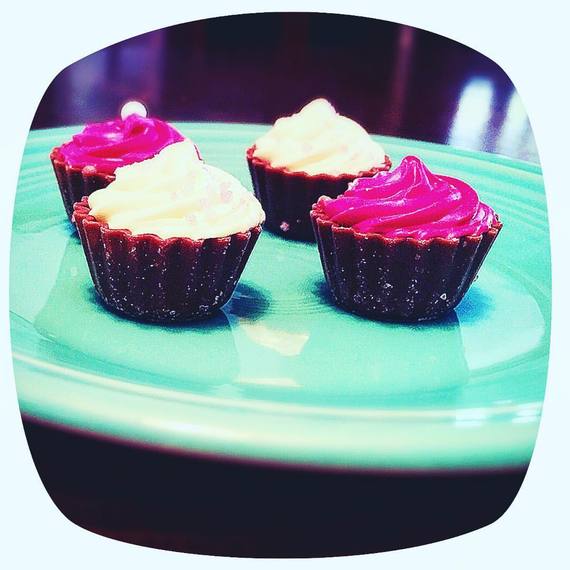 I did not include the following:

I did not include that almost immediately after I excused my girls from our table, my oldest jumped off of a chair in the family room, and her nose collided with her little sister's head. (They're thankfully fine.) I didn't include either that, after this event, I had to hold both girls down and give them a round of drops for pink eye. I didn't include these things in this adorable photograph description, but they were absolutely a real part of our special lunchtime. Oh -- and after all of this, we had a poop-up-the-back-of-the-baby situation, too.

Being a mom is full of ordinary things -- like massive poopy diapers after lunch, random boo-boos, illness, and even mishaps on my part, like a gift not arriving on the day it's supposed to. But motherhood is so much more than I can ever include as accompaniments for my pictures.

I can't describe how much my heart swelled with gratitude when the baby, with a mouth full of that special lunch, said, "Mmmmmm. Good!" -- or when my oldest said several times, "It's good food, Mommy!" Hell, it's nearly impossible to explain how joyful and surreal it is when my girls simply use this word, "Mommy," and they're talking to me.

Sometimes, I wonder if I'll notice that precise moment when they cease calling me "Mommy," and instead use "Mom." Will it happen suddenly, like my baby walking one day and then running the next, or will it happen so slowly that I could almost miss it, like how my oldest's downy child-hair turned into lush, dripping curls?

Social media's depiction of motherhood is assuredly fake on many levels -- pretty much most of us leave out the majority of cuts on foreheads, and scrapes on knees, or that time we let a handful of curse words fly in front of our children. Yet it's equally fictitious in that no words or perfect visual image can capture a mother's love.

More:
MotherhoodSocial MediaParentsparents-families-techvoices
Newsletter Sign Up
Raise the kind of person you'd like to know
Subscribe to our parenting newsletter.
Successfully Subscribed!
Realness delivered to your inbox