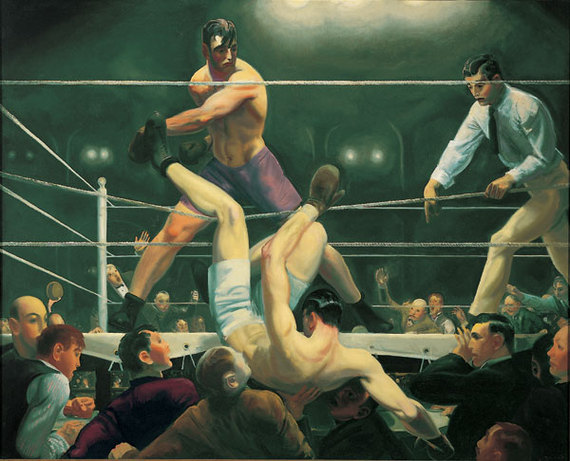 It's often easier to talk about visiting museums than it is to, ya'know, actually visit them. Between work, the gym, dinner, something else always seems to comes up. It's so much more convenient to just look at stuff on Tumblr, reblog it and pretend you know the difference between abstract impressionism and dada.

Last week  --  while doing exactly that  --  I stumbled upon George Bellows' 1924 painting, Dempsey and Firpo, and it lead me down an internet wormhole. I subsequently spent hours looking at his art, and became temporarily obsessed. I made it a point to see more of his work, or any work really. I just wanted to see something besides the day's depressing headlines.

Finally, yesterday, I put all the b.s. to the side and went to the Metropolitan Museum of Art. I had no idea if I'd find Bellows there  -- an exhibition on him had long since left the building -- but the beauty of going to a museum with no real plans is that you can wind up seeing things unexpectedly. 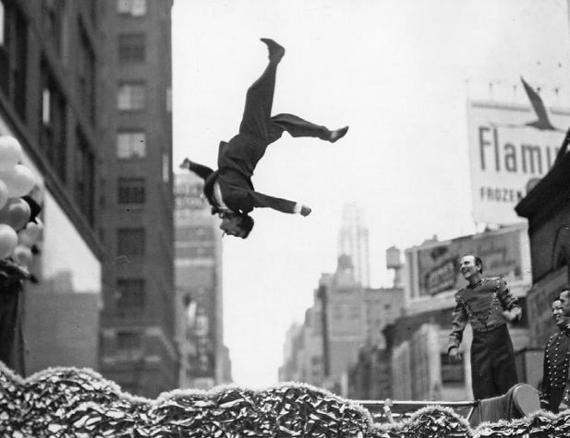 Museums are like being on Wikipedia, except you're in the real world, and you're not just clicking links that lead you to pages with more information, but looking at the actual work of art itself. The real world is awesome. Try spending some time there once in a while.

Upon entering the museum, we had no clue where Bellows' work might be located, so after a few minutes of aimless wandering -- the best kind of wandering -- we landed at an exhibit featuring photos by famed street photographer Garry Winogrand. Though I'd previously seen some of his work, as many people probably have, I wasn't that familiar with Winogrand, the artist, before we walked in. I was immediately drawn in by his pulpy black-and-white images of American life.

As we moved through the exhibit, one thing that really stuck with me was learning that in the later part of his career, Winogrand -- who had received three separate Guggenheim Fellowships to document our changing world -- didn't develop a lot of the pictures he took. He was essentially shooting just to shoot. Creating for the sake of it, because he enjoyed the process. 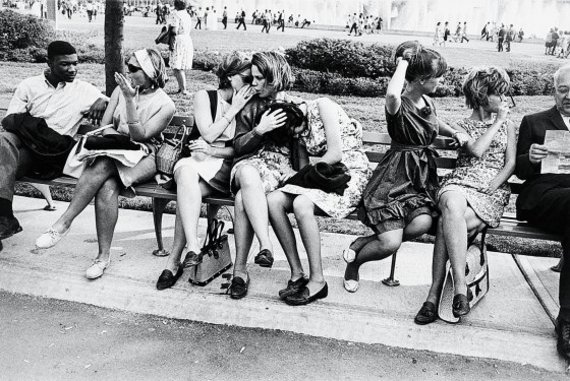 Before the breakdown of the music, film and publishing industries  -- before the internet, basically -- it was easier to create things with the intentions of commodifying them. There was a system in place, and you could choose whether to be a part of that system or not. Back then, it would seem silly to shoot thousands of pictures and not develop them. You were leaving money on the table!

Now, that system is gone, and gone with it are the business models, the traditional modes in which artists once endeavored to have careers. Though things have settled a bit recently, we are still in the wild west of what it all means for creatives getting paid. Sure, some money is flowing back into the system, and that's good, but it's pooled in very specific, niche areas. Like everywhere else, only the top 1 percent is really benefiting.

So if you're making things nowadays, you almost have to love it, you have to be shooting just to shoot, because the chances of getting paid and making a living from it are next to zero. That's not to say you can't be strategic and try to plan as best as possible -- you may even be making some money -- but if you're banking on this, you'll find the foundation's walls rather flimsy, liable to wilt under pressure. 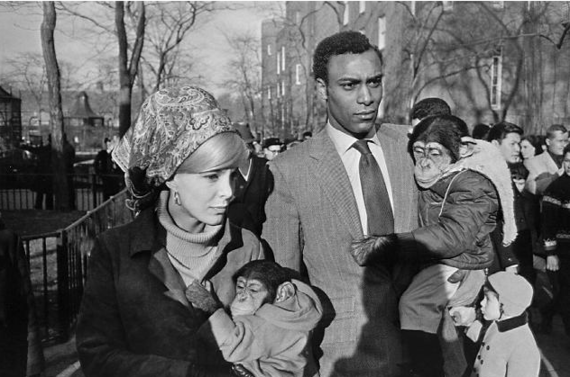 Which leads me to another thing I learned yesterday -- in his professional life, Winogrand often shot for magazines, but found that (surprise, surprise!) editors didn't particularly like the images that he liked. If it were up to him, he'd pick photos that were less obvious, ones that offered larger opportunities for introspection. But editors rarely saw his point of view, and often chose his most simple images, ones that left little to the imagination.

This is a feeling shared by many artists. Think of the writer who has to hand off his/her work to a heavy-handed editor, or the filmmaker who has to show dailies to a gang of annoying pencil-pushing studio executives. Indeed, these overseers have their place and their purpose, but for an artist, it is rarely not frustrating having to deal with them. All artists long for true creative freedom.

As we walked around the museum, that thought -- as well as the work of Picasso, van Gogh, Monet and others -- got me thinking about the nature of art in the modern age. What it takes to make art, how disposable it is, how people discover it, interact and engage with it and what it means to the person who creates it. 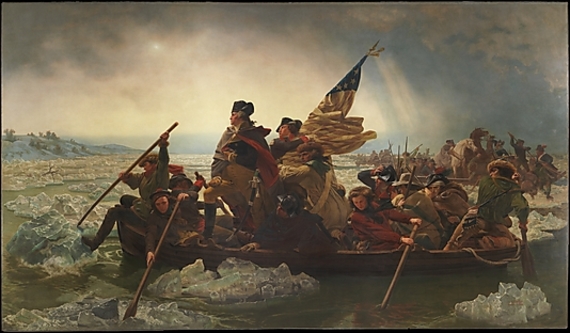 Particularly with something like painting, what role does it really play in a society where an image can be reproduced and circulated among millions of people with the click of a button? If you were a painter three hundred years ago, you would be responsible for interpreting a scene and documenting it. Like Washington Crossing the Delaware. In a sense, you were like a journalist or an historian, chronicling the times you were living in. You were in the service industry. Now, if you're painting, you're in the art business. Totally different situation, which explains the plight of the modern painter.

That isn't to say that painting doesn't have its place. Just that as a function of society, it is not of the same use that it once was. Therefore, it's hard to imagine a painter truly revolutionizing anything. The work can exist, but moving the needle is a tall task. And so more and more it feels like art is a world unto itself -- with artists having one-way conversations with themselves; or, at most, the art establishment -- leaving normal everyday people ignorant of its true worth and/or existence. 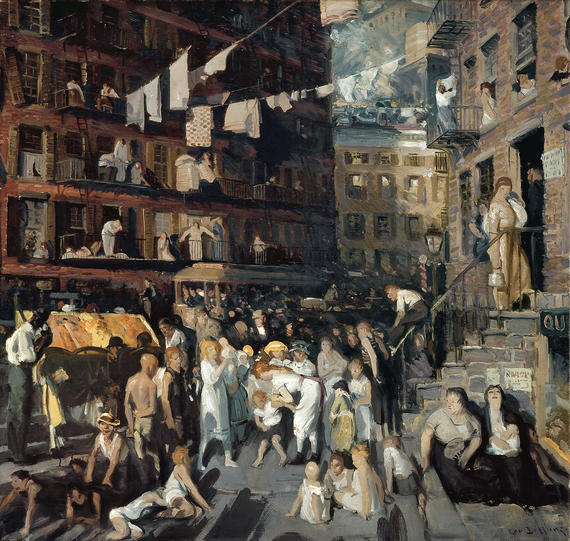 And maybe that's the reason why I found George Bellows' work intriguing. His paintings documented the effects of a changing world, a world that was less about himself, and more about others. In a way, he was like Winogrand, painting pictures of street life, the way he saw it to be. When the camera became the paintbrush in the latter half of the 20th century, guys like Winogrand carried on that tradition.

In the present day, photography is an exploding pastime, everyone with a smartphone and an Instagram account a semi-professional. Not professional in the sense that they'll be paid for their work -- although that's always nice -- but professional in that their images at least have the opportunity to be seen, enjoyed and 'liked' by many.

In that way, I think the crumbling of the establishment has been a fine thing. It tends to reward people who are just doing it for the sake of doing it. People who create for the love of creation itself. Also, because of technology, we can see art without actually having to physically go somewhere. That's the reason we put off the museum trips so easily. Often, they aren't needed.

That doesn't mean that everyone's work will one day end up in a museum, or that the magnitude of a piece of art can be understood just from looking at it on a small iPhone screen. Which is why museums are awesome. In a world filled with artist and artists, museums, at least in the best cases, filter out the good from the bad and make sure to spotlight work that needs to be spotlighted.

True, some of the best art comes from the fringes and stays there -- never making it inside the cavernous walls of something like the Met -- but to see art that someone labored over, their hopes, their dreams, their unflinching vision of the world placed there right in front of you, it is indeed something worth marveling at.

Museums are very cool and should be visited often.