When my kids stay with me as part of their weekly custody arrangement, we usually spend Saturday mornings eating my wife's homemade pancakes and watching a movie I taped from either the High School Musical channel or the Sponge Bob channel. My nine-year-old son handles DVR remote control duties with the fluid dexterity of Liberace on the piano.

At some point during recent showings of The Shaggy Dog and The Adventures of Shark Boy and Lava Girl, I picked up on two common themes:

1) The willingness of Sex and the City's Kristin Davis to play a suburban housewife under any circumstances, and

In both kid films, the parents' marriage is in some state of jeopardy; in one, the kids perceive a role in saving it. In each case, the parents avert tragedy and ultimately fall lovingly into each other's arms. (Though Davis should consider parting with her agent).

Said a friend of mine recently, "I remember as a kid of divorce, being deeply offended by "The Parent Trap" for its premise that a marriage could be fixed just by sticking the parents in a room together!

Even in the far superior The Incredibles, Violet warns her brother Dashiell: "Mom and Dad's life could be in danger. Or worse, their marriage!"

What's the takeaway for spongy young minds other than defining divorce as a fate worse then death?

I'm all for positive nuclear family images in kid films, even the "hit-you-over-the head-with-a-mallet" kind (see: Spy Kids). What makes me uncomfortable is when divorce is superfluously depicted to kids as the end of the world. The obvious inference to real-life children of divorce (of which there are roughly one million a year):

Your family is broken. Happy ending for us; stinks to be you. 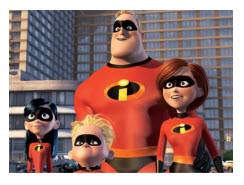 In reality, while divorce is an unfortunate outcome, these children are not necessarily wounded for life. A comprehensive 2002 study of more than 1,400 families and 2,500 children by a professor emeritus in the department of psychology at the University of Virginia found the negative impact of divorce on both children and parents has been "exaggerated": Roughly 20-25% of youngsters experience long-term damage after their parents break up, but the large majority end up coping comfortably.

The difference between coping with upheaval and being deeply scarred by it seems to hinge more on good parenting -- as well as what was going on before the divorce -- than on family definition.

Divorce is clearly not the psychological terminal sentence for kids it's sometimes made out to be. Knowing this, Hollywood writers looking to put their kid protagonists in jeopardy should stick to the safe slate of villains and demons, and avoid the all too easy road of demonizing divorce.

Joel Schwartzberg is an award-winning essayist from New Jersey whose first book "The 40-Year-Old Version: Humoirs of a Divorced Dad" is now available.