I don't know when my kids took their first steps.

I heard that. You, with your neatly-completed baby book proudly on display marking all of your baby's firsts, I heard you gasp just now. I'm glad I can't see the look of horror, or pity or disgust now leveled my way.

I don't have a lock of hair from the first hair cut, though I distinctly remember that day. It was as if the barber was jamming his shears straight into my poor boy's skull.

I don't know when my kids rolled over.

I don't know when they first said "Mama."

Not exactly. I don't know the exact day or time. If you look through my kids' sparsely-completed baby books, it's as if they never began walking. The only thing that I do (probably) have recorded is their first taste of food. One day, we decided it was time. We sat them in a high chair, put on a bib and gave them "real" food. Nothing subjective about it. On a certain day, at a certain time, they ate non-baby food for the very first time.

Everything else happened, and is happening, so gradually. Marking a day and time in some book seems so arbitrary to me. They both were cruising along furniture and walking with assistance for months with a tiny step (hands free) here and there. Do those "count"? Is the first step the one where he took two from me to his dad, or the two he took, unprompted, forgetting that he wasn't holding on to anything? For many, many days my boys practiced and practiced trying to walk -- sort of letting go, kind of getting it, a half step here, maybe a full step there. And then one day, they were walking.

I'm not a bad mom. Really, I have been paying attention. To everything. I was there for all the, "did he just say 'Mama'?" moments. But their lives seem to be marked by larger swaths of time than those that would fit in a blank space in a book. (Or maybe I'm just too wordy.) I remember the months of hearing them babble, every now and then catching a real word. Or maybe it's just that remembering days seems too daunting; marking their growth in weeks and months is more forgiving.

In the four years that I've been a mother, it is hard to recall a day when I haven't read, overheard or been told that it "goes so fast." It's a gnawing, constant voice reminding me to "enjoy every minute." I've even read a couple refreshingly honest articles about how no one really enjoys every moment (like when you're in a crowded public place and your child acts like someone is jamming shears into his skull) -- but still, those articles too seem to end with a warning. (Careful, time is ticking!)

Others offer a knowing, "the days are long but the years are short" comment, but the effect is the same. It makes me feel sad and worried. Should I be doing more to "cherish every minute"? Am I going to be reduced to a pool of tears when, 10 years from now, I need to know the exact day my child first walked and I won't have anywhere to look it up? Or will it be enough to know it was just after he turned 1 -- in that 13th month?

I've watched other mothers soldier through the start of a new school year, and sure, there are a few who joke about finally having the freedom to get back to soap operas and bonbons, but mostly I hear mothers describe it as "bittersweet." I get that. Our babies are growing up. But why can't the passage of time just be sweet? I don't feel the sadness I thought I would now that my youngest is in preschool. He looks so cute going off to school in his uniform with his backpack. I can watch him through the fence, playing in the yard, and he looks so big. And then I see him dragging along his stuffed lion and he is little again. I know I'll never get this time back, but I also know there are more fun times ahead. I remember the months when he was first born, and those seemed like "the best" times. And then, when he first started walking, those seemed like the best times. Then he was 2, and those months were great. Now he is 3, and it's still the best time.

We watch "Ni Hao, Kai Lan." There is an episode about bears and foxes not getting along. For months, my son has been talking about the bears and the "boxes." We used to have a fox family that made our yard in Connecticut their home. We loved to watch the little "boxes" play in our driveway. (I know, I'm not supposed to encourage mispronunciations, but I did. I absolutely did, because what's cuter then 3-year-old speak?)

Today, he said "fox." With an F. Just like that. Every day, his vocabulary becomes clearer and clearer. In a few months, you won't be able to hear him talk about getting the "showpa from the chicken," because he'll ask you in his sweet little boy voice for the "spatula from the kitchen." And again, I won't be able to tell you when he started speaking so clearly. It's all just gradually happening. Or maybe I just choose to see it this way because then it doesn't seem so fast. It feels just right.

Or maybe it's living abroad. I somehow feel that being in Asia is helping us mark our time differently than if we had stayed in Connecticut. New faces, new places and new ways of doing things remind you to look more closely. Everywhere. At everything. The weeks and months are marked not only by the milestones my kids gradually reach, but also by our gradual familiarity with our adopted home. Or maybe it's just the 1,000+ pictures I have on my phone from almost every day of their short lives.

So remind me in 15 years, when I try to reminisce with a half-empty baby book and end up sobbing to a young mother in Target about the time thief, to re-read this. 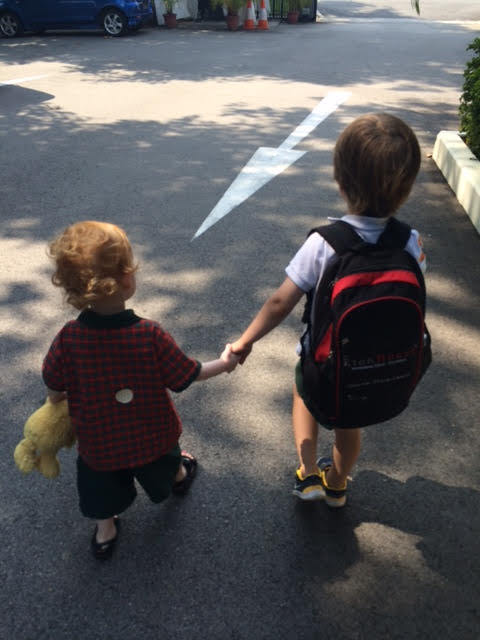