I'm generally not the kind of guy who marches around, offering advice to people who don't ask for it. But if there was one piece I would give to fellow parents, it would be to "think like your child." In other words, in any given situation, put yourself in his or her shoes and project all possible thought outcomes. If we do that, we are more likely to understand them when they give us a hard time. I did this recently during a family trip to New Jersey's IZOD Center, to take in a performance of Disney's "Frozen on Ice."

Leading up to the date of the show, Antonio (my 5-year-old) displayed mixed emotions. It was clear he was excited, but was sure to keep his cool when we brought it up, as if not wanting to show his hand. "Frozen?! Oh... okay... I mean, it'll probably be alright." He was as transparent as ice itself. And make no mistake; he was psyched. But he didn't want us to know it. Because, quite frankly, "Frozen on Ice" is "for girls." At least according to a handful of other influential boys in his kindergarten class who had gotten into his head.

For someone who wasn't so thrilled about seeing a "girly show," Antonio was quick to angle for a souvenir, an Olaf cup, gleefully expressing his gratitude as he clutched this new accessory that he miraculously hasn't broken yet. But as we reached our seats, his smile faded. We were surrounded by a veritable sea of Queen Elsas.

"It's all girls. There are no other boys," he nervously mumbled.

Admittedly, this was getting hard to sell to him. It didn't help that the dad sitting nearby gave us a strange look as he realized my sons weren't there with a sister. But I told my son the same thing that would comfort me if I were in his place.

"Honey, there are other boys here. And there's a rather big one sitting right next to you. Me. So please don't listen to those kids who tell you this is only for girls. Boys are here. Girls are here. Mommies and daddies are here. This might be hard for you to understand, but there are going to be people who try to tell you what's best for you, try to get in the way of your happiness. Look around. Is anyone laughing at you?" He shook his head. Then his eyes fixated on the stage of ice in front of him. I said nothing else. The rest was up to him.

I tried to sneak a picture of him, to capture the sense of awe that was clearly overcoming him as the music swelled. He caught me, and waved me off. He might have been starting to enjoy himself, but he'd be damned if there was going to be photographic evidence of it.

To kick off the live performance, Disney rolled out a healthy amount of its non-Frozen characters. Mickey, Goofy, Woody, Buzz Lightyear. Both my boys lit up for them. Seeing as these were male characters, my older son's masculinity breathed a sigh of relief.

As you probably guessed, Antonio absolutely loved the show. We all did. Yes, even me. More than anything that happened on the ice, it was pure joy to watch the reluctance and preconceived notions all go away, and to see my son finally get to the point where he no longer heard his classmates barking "Frozen is for girls!" He was simply enjoying himself. And I saw in that moment the open-minded son I hope my wife and I are raising. 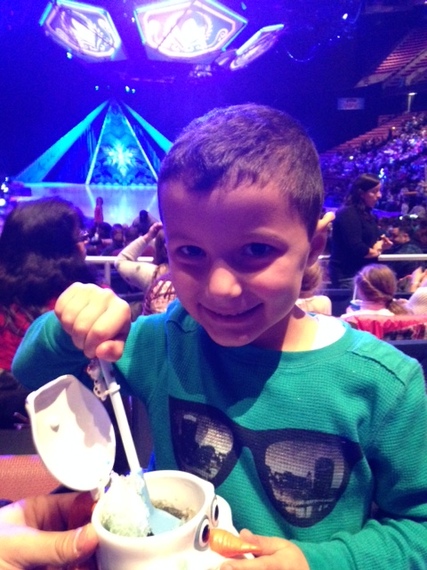 In the end, I'm well aware that the voices of classmates will at times be too much for my wife and I to overcome. And both our sons will often choose the path of least resistance for fear of being laughed at and mocked by their peers. But someone once told me to be careful what you say in front of your kids, because when they're older, you become the voice in their head. Here's hoping my children remember my voice encouraging them to be open-minded, not yelling at them to eat their vegetables.

More:
Parentsfrozenfrozen on iceparents-dads
Newsletter Sign Up
Raise the kind of person you'd like to know
Subscribe to our parenting newsletter.
Successfully Subscribed!
Realness delivered to your inbox