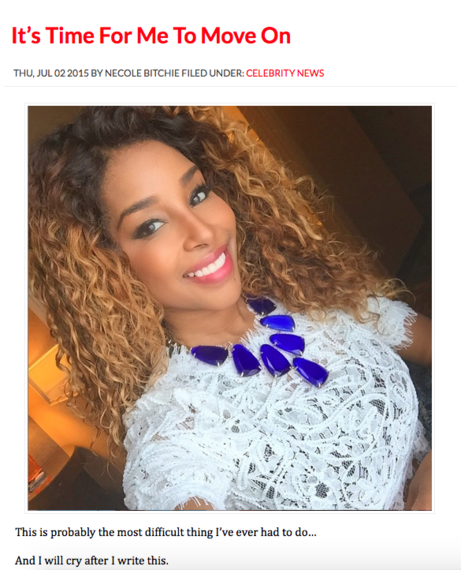 Thursday, July 2, 2015, Necole Kane (famously known as Necole Bitchie) shocked her fans and followers with a "farewell" post on her popular blog. I, as many other fans, questioned her departure. Yes, celebrity gossip is my guilty pleasure, but I also felt less guilty going to Necole for the "tea" because it was a site that I felt had integrity. But not only that, I was also inspired by her story as well as her accomplishments.

But after I read the "It's Time for Me To Move On" post I wasn't shocked; I was pleased, impressed, and contemplated on the impact her decision was going to make for our generation. If she could leave the limelight for the search or the start of something different, something more, something of purpose and meaning, then who else could this inspire?

So, I reached out to her thinking I would ask her, "What's next?" However, the interview ended up being much much more than I expected.

Saba Tekle: How long have you thought about leaving celebrity gossip behind?


Necole Kane: Probably three to four years, and I've doing this seven, so the majority of time I was doing it. I know for a fact, in 2012, I told anybody who would listen, "Yeah, I am going to close my site soon." So, it's almost embarrassing to me that it lasted that long. (Her voice begins to tremble) Damnit, I am about to cry already, damn I am going to cry this whole interview.

That just disappointed me.

I've always preached to young women, especially my young friends, on if you're in a relationship that is not treating you well, leave. What are you still doing there?

If you're constantly coming back to me telling me that this guy is treating you like shit and you know you deserve better, then when I see you walk through the door with him every day, I don't want to hear it anymore... but that is what was happening to me.

For years, I told people, "Oh I'm moving on... I am going to do something else."

I think my purpose came to me, or at least I knew that celebrity gossip wasn't just a lane I was supposed to excel in four years ago, but what I am trying to say is that I was a big contradiction because I was constantly trying to inspire people to not be afraid to live your dreams, but I was afraid to leave the dream I built to move on to something new.

I teared up because I was disappointed that I stayed in something for a long time just because it made good money, but I was not completely happy.

ST: Is there something that we are not seeing that makes you feel this way? I understand and feel why you may be disappointed, but I still believe you are an inspiration.

NK: Over the years, I've visited so many therapist, life coaches, and you know all those things... I am a big advocate of. I said that to say that one of the life coaches or therapist I was seeing was telling me I'm feeling a sense of guilt for my blogs, and at the time, I responded, "No, I don't." And basically, maybe I did feel a sense of guilt. I don't see where gossip is considered positive. But, of course we posted a lot of positive, but the gossip would overshadow it.

One of my biggest moments in my career, I feel, was over the last year when we raised $4,000 in an hour or two to go towards a girl's first semester of college; now she's in Georgia State University. And with the help of my readers, we raised $15,000 that sent a boys soccer team to Dubai to compete in the World Cup. Those were my proud moments of running a site like that, but those moments are overshadowed by who's cheating on who and who fought who and all those things.

The positive things were just a blimp, and I think that was the big part of it. It was my goal from the start... I've said this over the last 6 years; I just want to be an inspiration to young women.

I am sure I have been, but I didn't see myself being thrown in those conversations when people talked about women who are inspiring. I remember it was a struggle for me to get invited on the red carpet of Black Girls Rock, and I hate that I want to be validated by it, you know, that type of recognition, but it's important to me. That is what I wanted my brand to be about. When I saw it straying from that, I thought, I am not working hard enough and may have to reroute my path.

ST: To me you've always been an inspiration. Your drive, your determination, your success, and even your vulnerability are what inspired me the most. I hope you know this, but I still want to know why leave now?


NK: Well, there were a lot of things going on behind the scenes personally. To be honest, I moved to Arizona in November, and this was the first time in my 7 years I didn't live in an "entertainment capital". I stopped doing appearances and things for about 6 months, and during that time, I started living as Necole Kane, the person I was born and not the character, Necole Bitchie. It was like an awakening, and I was like, I like this Necole. People might think it's weird, but when I step out and go to an event, it is almost like I have to put on a mask and a costume and be this person, and sometimes you get lost in that.

So, I am living in Arizona now and enjoying life the way it's supposed to be lived. Then, I decided to do this panel recently in May or June in Houston, but the week leading up to it, I had this extreme anxiety. Oh God, I have to be Necole Bitchie again. I was so stressed, and I was thinking this was my que. It's time.

I knew I was ready to live the life of the person I was born, not some character and not some alias.

In Blogger of the Year speech at the Blogging While Brown conference two years ago, I said, 'When you are given a platform to speak, you should say something meaningful' and I want to live up to that. I am such a different person than I was almost 8 years ago when I launched the site, and I wanted my work and my brand to reflect my evolution.

I was 16, when I first heard of Oprah and I was touched that this powerful African American woman was traveling the country and empowering women. Her tour was selling out like hotcakes and I wanted that type of power and influence when I grew up.

I can only imagine how many young women are looking up to me, and the other female bloggers who have paved the way, and saying 'I want to be like them.' And for that reason alone, I had to take responsibility. Now, it's up to me to find a way to elevate my audience, produce thought-provoking content with substance, and give other women a platform to share their truth and an unjudgemental and encouraging atmosphere.

I am still a work in progress. If just having the courage to walk away from a successful brand to follow my life's purpose and passion has encouraged and inspired at least one person, I am happy.

To listen to the extended and off the record interview and recording to go to.... http://sabatekle.com/blog/necole-bitchie/

In case you don't know who she was...