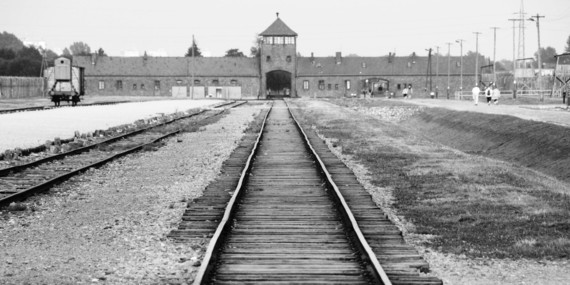 Some things should remain sacred enough never to be used for political gain or as justification for military operations. Take a look at these photos published in The Atlantic and think of the emotions evoked by such horrifying images. Think of the 33,771 Jews murdered at a ravine named Babi Yar in the Ukraine.

According to page 63 of The Good Old Days: The Holocaust as Seen by Its Perpetrators and Bystanders, the Babi Yar massacre was orchestrated with monstrous and cold-blooded efficiency. Edited by Ernst Klee, Willi Dressen, and Volker Riess, the German historians document the words of SS, Einsatzgruppen, and collaborators of Nazi war crimes. Below is the testimony of a truck driver who witnessed the Babi Yar slaughter in 1941:

I watched what happened when the Jews - men, women and children - arrived...

No distinction was made between men, women and children...

Once undressed, the Jews were led into a ravine which was about 150 metres long, 30 metres wide and a good 15 metres deep...

When they reached the bottom of the ravine they were seized by members of the Schutzpolizei and made to lie down on top of Jews who had already been shot...

A police marksman came along and shot each Jew in the neck with a sub-machine-gun at the spot where he was lying...

The moment one Jew had been killed, the marksman would walk across the bodies of the executed Jews to the next Jew, who had meanwhile lain down, and shoot him...

The children were kept with their mothers and shot with them...

The shots from the ravine could not be heard at the undressing area. This is why I think the Jews did not realize in time what lay ahead of them...

Six million Jews, including 1.5 million Jewish children, lost their lives in the Holocaust. In all, 11 million people were murdered by the Nazis during WWII.

According to conservative politicians like Prime Minister Benjamin Netanyahu, Iran's quest for a nuclear bomb is the equivalent of Babi Yar, Auschwitz and the Holocaust. This absurd leap of logic ignores the fact that Holocaust victims don't have a say in how their fate has been distorted in 2015. The families who perished in the gas chambers never voted for the Likud party. They never voted for Netanyahu.
We don't even know if they'd agree with his politics.

All we know is that the Holocaust was once a sacred topic that remained beyond the reptilian grasp of politicians. Sadly today, it's become yet another form of doublespeak and propaganda by conservative ideologues eager to justify their policies. Not only is this shameful misuse of history an insult to the victims of Nazi terror, but it utilizes their lives and deaths without their consent.

Ultimately, evoking the deaths of six million Jews, without their authority and for the sole purpose of lobbying against an enemy nation, is a vile form of propaganda.

According to Fox News, Netanyahu made the following statement about Iran in 2013:

"This is a regime that is building nuclear weapons with the expressed purpose to annihilate Israel's 6 million Jews," Netanyahu said, alluding to the number of Jews killed by the Nazis during World War II. "We will not allow this to happen. We will never allow another Holocaust."

In addition to Iran, Ynet quotes Netanyahu as saying, "Hamas is trying to start another Holocaust." During his UN Speech last year, he stated that "The Nazis believed in a master race" and "militant Islamists believe in a master faith."

With reasoning skills like Bibi's, Egypt of the '60s and '70s should have been viewed as a genocidal regime with intentions of committing another Holocaust. Not only did Egypt wage wars against Israel in 1948, 1956, 1967, and 1973, but they openly declared the intent to destroy, annihilate, and eradicate the Jewish state. The following is a list of genocidal threats made by Egypt before peace in 1978:

"Our basic objective will be the destruction of Israel."

"This is our chance Arabs, to deal Israel a mortal blow of annihilation, to blot out its entire presence in our holy land."

"We challenge you, Eshkol, to try all your weapons. Put them to the test; they will spell Israel's death and annihilation."

Like Syria and other Arab nations, Egypt openly made statements that called for the destruction of Israel. As a result of wars with Egypt, 776 Israeli soldiers died in 1967 and 2,656 Israelis died in 1973. In both wars, close to 10,000 IDF soldiers were wounded, which took a terrible toll on a small country.

Egypt openly expressed the desire to eradicate Israel, inflicted thousands of casualties in various wars against Israel, and posed a serious threat to Israel's existence. Therefore, according to Netanyahu's logic, Menachem Begin shaking hands with Anwar Sadat in 1979 equates to a Jew shaking hands with Eichmann.

Does this make sense to you?

Furthermore, costly wars with Egypt taught Israel the best way to deal with true existential threats. Maj. Gen. Benny Peled, commander of the Israeli Air Force at the time, stated that "Enemy aircraft could have dropped 10 bombs on Tel Aviv" in 1973. Maj. Gen. Peled is also quoted in I24News.tv explaining an important lesson of the Yom Kippur War:

"Among the lessons of the Yom Kippur War, the lesson that is most saddening for me, above everything else, is that an army as small as ours took the issue of balance of power too lightly."

...The Yom Kippur war led to recognition that Israel could not guarantee military domination of Arab States and paved the way for the Israeli-Egyptian peace agreement in 1978.

Because Israel realized that Egypt was a true risk to its existence, and it "could not guarantee military domination" against its enemies, this "paved the way for the Israeli-Egyptian peace agreement in 1978."

Again, according to Netanyahu's recent logic that twists the Holocaust into a semantic weapon, since Iran and Hamas (like Egypt decades earlier) have made statements calling for Israel's destruction, there must never be negotiations with either enemy.

Does this sound logical?

In addition to bombs and tanks, enemy states use words as weapons. After all, that's what enemies do; they threaten each other. North Korea threatens to turn Seoul into a "sea of fire" annually while South Korea has promised Pyongyang would "evaporate from the face of the Earth" if it ever used nuclear weapons. Kim Jong Un has threatened to attack U.S. bases in the Pacific and according to The International Business Times, North Korea has openly threatened the U.S. with nuclear war:

North Korea reiterated Friday its threat to attack the U.S. with nuclear force...it said it would attack the White House and the Pentagon for increasing tensions on the Korean peninsula.

Using Netanyahu's reasoning, the U.S. should launch a preemptive nuclear strike against North Korea, to prevent a genocide against America.

So why doesn't North Korea use a nuclear weapon against its sworn enemies, even after stating its intent to do so?

For the same reason Iran won't sacrifice its 80 million citizens in a suicidal war (Israel has nuclear weapons) against Israel. If mutually assured destruction has a way of sobering even the North Korean regime, it'll do the same with Iran.

Utilizing the Holocaust for political gain doesn't only insult the memory of those who perished. It also ignores Israeli history and grossly exaggerates the threats posed by Iran, Hamas, and other enemies. People like Schumley Boteach enjoy saying, "One Holocaust is quite enough," but conveniently fail to mention that Egypt also made genocidal statements, waged a series of wars against Israel, and eventually signed an historic peace agreement in 1979.

The memory of six million Jews and the eleven million other human beings who died in the Holocaust is too sacred for calculating politicians and their paranoid cheerleaders to be turned into a semantic missile. Iran and Hamas are indeed terrorist threats, but they're not the Third Reich and they'll never be the Third Reich. Bush used the Nazi analogy to justify the invasion of Iraq, which turned out to be a disaster, so perhaps it's wise to pay greater attention to Netanyahu's misuse of the Holocaust.