San Diego Comic-Con is the site of the launch of the first ever early-reader chapter book series for adoptees -- Jazzy's Quest: Adopted and Amazing!

The inspiration for Jazzy's Quest came from my daughter, Katie. We adopted Katie out of foster care when she was a baby. When she was almost six years old, her birthmother reached out and asked us to come visit, and we began taking Katie for annual reunions with her birthmother and siblings. We didn't know any families like ours!

In Katie's early years, we read books to her that explained what it means to be adopted. The books were designed to reassure her that we want and love her. Most were written from the viewpoint of an adoptive parent.

As Katie grew older, she naturally moved away from picture books and entered the fantastic world of reading beginner chapter books. Oh, yes, how she loved The Magic Treehouse books and the Ivy & Bean books and other starter books! But we noticed a problem - none of the books featured a modern adoptee like Katie as the protagonist.

As children develop into readers, they think more about the world in which they live. They look to identify with a character, to find a common thread or a similar perspective.

Between ages 6 - 8, Katie was too young for a classic series such as Anne of Green Gables, and she just wasn't ready yet for a more current series such as the Harry Potter books or the many YA books that feature adoptees. Our only options were beginning reader fairy tales, but the adoptees were usually helpless young women whose parents mysteriously died, leaving them at the mercy of cruel step-parents until a handsome prince saved them. Not the model we wanted for our daughter.

Being adopted is hard for many people. There is a lifelong search for self that occurs in many adoptees and can lead to feelings of isolation around people who do not know what it's like to be adopted.

Over coffee and crepes, I confided in my friend Juliet Bond (an experienced social worker and writer of the popular adoption book Sam's Sister), and we discussed the growing sense of isolation that adoptees feel as they enter the tween years.

Juliet and I decided to create a new genre: fictional beginning chapter readers for adoptees. After dozens of drafts, we settled on the storyline for Jazzy's Quest, with Katie providing insight and authenticity as we wrote.

The story is told from the point of view of Jasmine, a young transracial adoptee who feels different from the rest of her family. It is important for Jasmine's voice to shape the story, because it allows kids to identify with Jasmine's unique trials and successes. In this initial book, we meet Jasmine and follow her initial transformation into Jazzy:

Fourth grader Jasmine is the youngest of three children, and the only adoptee in the musically gifted Amazing Armstrong family. But secretly, Jasmine doesn't like to sing or play instruments. The big community talent show is approaching, and Jasmine must scramble to figure out what her act will be.

Will her birth family be able to help? How will Jasmine discover what makes her amazing? A passionate Star Wars fan with a keen interest in making intricate costumes, Jasmine learns to follow her own path, with the support of both her families.

Because there are SO many types of adoptees, we decided to make Jazzy's Quest into a series, which will allow us to create characters that represent the many perspectives of an adoptee. Jazzy is always the main character, but we will feature other types of adoptees throughout. For example, Jazzy's family has an open adoption. But at the end of the first book, Jazzy will meet Michael, a boy who has a closed adoption from foster care. Michael's storyline will be a main subplot in the second book in the series, which Juliet and I are already writing.

Juliet and I are both passionate advocates of equality, so we have incorporated multiple themes into Jazzy's Quest. Like my daughter, Katie, Jazzy is a female Star Wars fan, because gender shouldn't determine what toys you like to play with! One of Jazzy's best friends - a main character named Alec - happens to be in a wheelchair, because kids of all abilities should be represented in children's literature.

This is a big step forward in helping adoptees feel a sense of belonging. We are so happy to be launching Jazzy's Quest at the 2015 San Diego Comic-Con! May the Force Be With You! 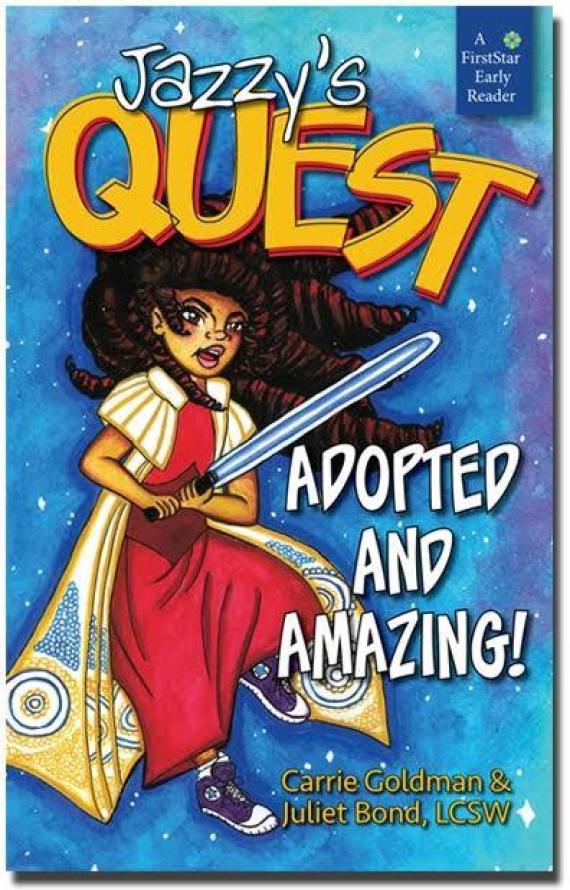