As I was scrolling through Facebook today, I noticed a headline from one of my favorite media personalities, Rob Cesternino. The former Survivor castaway runs a website and podcast that recap reality television, and this particular headline previewed a recap of MTV's popular competition show The Challenge. The most recent season, Battle of the Exes 2, premiered Tuesday night on MTV, and featured Diem Brown, a cancer patient who passed away on November 14 of last year after three different battles.

Cesternino, in the small preview sentence below the article link, writes this:

"Rob Cesternino talks about the season premiere of MTV's Challenge: Battle of the Exes 2 starring Diem Brown, who lost her battle with cancer in November." 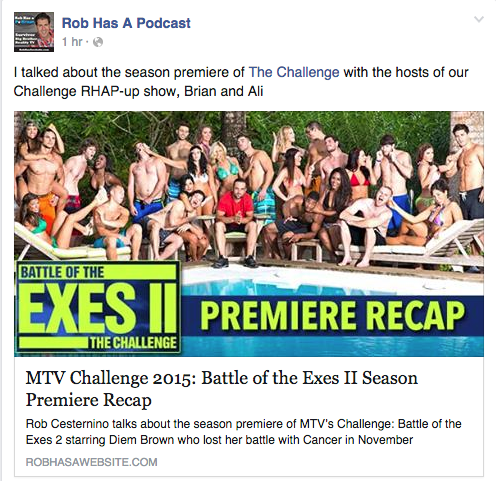 Forgetting completely that I was on a Skype call with a friend of mine, I started breathing heavily, my eyebrows furrowing with anger. "She did NOT lose her battle!" I yelled. "She freaking survived two times! She inspired so many others! She didn't lose at ALL!"

Fortunately, RJ, my friend on Skype, already knows that I lose my temper fairly easily, and stepped in to calm me down a bit. But while I'm currently much calmer, sitting quietly at my desk writing this, I'm still miffed that the term "losing" one's battle with cancer is so commonplace. Does anyone really ever "lose" if they stand up to cancer bravely, even if they pass away?

The word "losing" has so much stigma. Nobody wants to be called a "loser" for any reason or in any context. So why is it so often used to describe someone who's fought cancer? While I wouldn't call cancer a "winning" situation by any means, those who have to fight it are giving it their all. Their bodies are drained of energy from surgery, chemotherapy, radiation, and more. They often watch their hair fall out, their family and friends struggle to comprehend it all, and yet they keep the fight up. Each and every cancer patient serves as someone's inspiration- his or her strength and resilience is unparalleled by almost anything else.

Diem is a great example. In her time on earth, she founded MedGift, a charity organization that allows people to create donation campaigns when they need help with medical bills. She inspired so many as she accomplished her career goals and competed in many seasons of MTV's The Challenge. I still remember the day she tweeted an article I wrote for this very publication, praising me as a beautiful writer. (I have a screenshot of the tweet stored on my phone. I look at it nearly every day.) She didn't lose, did she? She will continue to be an inspiration for decades to come.