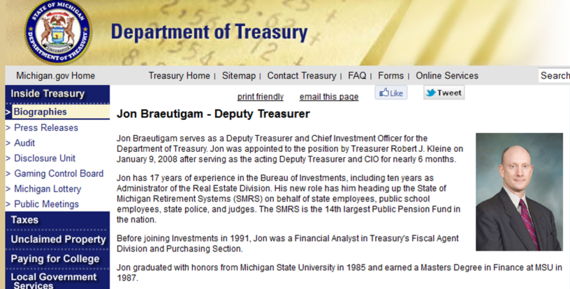 On a quiet Sunday, the Detroit Free Press has reported that the State of Michigan under Governor Snyder, has decided it's time to start paying people what they're worth.

"The State of Michigan quietly increased the salaries of its top investment officials in the Treasury Department by more than 80% this year, saying it was too difficult to attract and keep qualified people under the former pay rates." (Source: Detroit Free Press)

This is the same governor who agreed that Right to Work was not a good idea for Michigan and that he would not sign such a bill--then quickly signed this bill during last December's lame-duck New Year's Eve party.

This is the same governor who has captained over a hundred laws crippling labor unions, raising health care costs and taxing retirees pensions.

Charter schools are on the rise and cyber schools, as examined earlier in my blog with the Nexus Academy of Royal Oak (in Southfield via Baltimore via London), are a scam to push districts' money directly to corporations abroad with little to no accountability--certainly none of the close-examination that local school boards must endure for any budget decision. Students may be in classes with 300 other students and the faculty merry-go-round is as the rock-solid HR department at Wal-Mart during the holiday season.

But now things may change. Now Jon Braeutigam chief investment officer has seen his pay bump slightly from $180,000 to $333,000. It's only fair, the state argues, that's what other states are paying and you've got to attract and retain good people.

So I would like to recommend that Governor Snyder and the State House and Senate agree to one of two plans of action.

Plan A: Pay the rest of the state employees what they're worth. It's a dangerous gamble as Michigan continues to tumble down the states' list of average pay for teachers. We used to be in the top five, now we're moving quickly down I-75, fast approaching the Gulf of Mexico. There's not much incentive for the best teachers to come to Michigan anymore.

Take a visit to CareerBuilder or Monster.com today and glance through the hundreds of jobs being offered by charter school academies and cyber-schools. They can't retain anyone because the demands are so high and the pay is so low. Meanwhile, drop by your kids' school and ask a few teachers if they've lost any colleagues recently due the extreme changes made to Michigan's educational system. Odds are you're going to hear some sad stories of gifted, engaging teachers who have been forced out of their calling.

Plan B: Create a "Charter" Government. Why not? It seems only fair that the legislature should lose its golden lifetime health-care plan. Many states have part-time representatives. There's no reason that we can't ask our senators to clock out, like Wal-Mart, at 29 hours per week--just before they qualify for the Affordable Health Care Act.

Since there already isn't accountability, there's really no reason not to cut their pay to $30,000 per year as well. After all, there's no prerequisite to running for office anyway--nor governor in case anyone's interested.