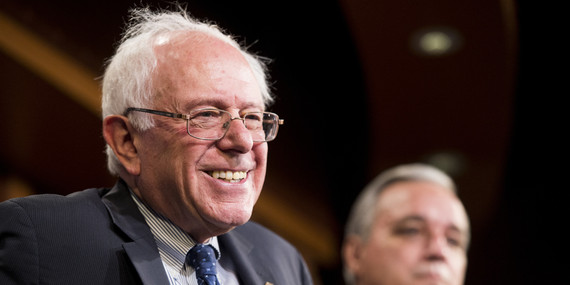 According to ABC News, "In the past 10 presidential elections, only two candidates -- Democrat or Republican -- have ever lost in both Iowa and New Hampshire and still secured their party's nomination." Therefore, if "middle-class economics" are truly at stake in the Iowa Caucus and New Hampshire Primary, then it's entirely feasible Bernie Sanders finishes ahead of Hillary Clinton. If this sentiment is viewed as mere fantasy by some people, then let's analyze the Democratic Party's alternative to candidates like Bernie Sanders or Martin O'Malley.

Few want to acknowledge publicly that the Democratic front-runner fills them with less dread than some Republican 2016 hopefuls. And, to be sure, none of the Republican-leaning financial executives are so far suggesting they'd openly back her.

But the private consensus is similar to what Goldman Sachs CEO Lloyd Blankfein said to POLITICO late last year when he praised both Christie -- before the bridge scandal -- and Clinton. "I very much was supportive of Hillary Clinton the last go-round," he said. "I held fundraisers for her."

People close to Blankfein say the same calculus applies to a Jeb Bush-Hillary Clinton race as it would to a Christie-Clinton contest. "Those would be two very good choices and we'd be perfectly happy with them," a person close to Blankfein said. Blankfein is a self-described Democrat, but his comments about Christie and Clinton reflect the ambidextrous political approach that many Republicans and Democrats on Wall Street take.

...Clinton warmed some hearts on Wall Street during a paid, closed-press speech to Goldman Sachs executives and other big donors last year when she said of the financial crisis, in essence: We all got into this mess together, and we're all going to have to work together to get out of it. That line, as the people on hand interpreted her speech, reflects the feelings of many financiers.

Therefore, not only is Wall Street supportive of Hillary Clinton, but she "fills them with less dread than some Republican 2016 hopefuls." In contrast, Citigroup and J.P. Morgan recently threatened to withhold campaign donations to Senate Democrats as retaliation for Elizabeth Warren's economic positions. Warren's response was "bring it on" and this attitude is why groups like draft-warren.com (@draftwarren2016) and runwarrenrun.org have worked to find an alternative to "Wall Street's Republicans' dark secret."

However, there's already one Elizabeth Warren Democrat running in 2016. His name is Bernie Sanders. Progressives everywhere should embrace his candidacy, not shrug their shoulders and settle for another "Emailgate" or foreign donor controversy.

Conventional wisdom among Democrats focuses on a peculiar form of logic, wrapped in cloak of pragmatism and buoyed by winning at all costs. After all, the alternative could be Ted Cruz, so even if Hillary Clinton has certain issues, she's the only person capable of beating a GOP challenger. Ironically, this mindset also states that endless scandal, questionable foreign donors, thousands of deleted emails, and a hawkish stance on foreign policy equates to an electable progressive candidate. In the minds of many Democrats, Hillary Clinton can easily defeat a GOP challenger for the 110 electoral votes in the 9 critical swing states. Someone like Bernie Sanders, many Democrats say, is too liberal or left-leaning for Americans in Ohio or Pennsylvania in 2016.

However, what makes these naysayers believe that Florida or any other battleground state will choose Hillary over Jeb Bush? Without a clear difference on issues like war, Wall Street, and the economy, why would middle-of-the-road voters choose Clinton over a somewhat more conservative alternative? Does Clinton's centrism and penchant for political scandal (they can't all be part of a right-wing conspiracy) make her the best Democratic candidate?

Unlike Republicans, who stand by their more extreme candidates and love politicians like Mike Huckabee or Rick Santorum, Democrats for some reason always jettison their most noble and unapologetically progressive icons. The following is a principled and thought provoking speech given by Bernie Sanders in the Senate, and while reading these words, try to imagine Hillary Clinton saying the following:

Today, the Wall Street executives--the crooks on Wall Street whose actions resulted in the severe recession we are in right now; the people whose illegal, reckless actions have resulted in millions of Americans losing their jobs, their homes, their savings--guess what. After we bailed them out, those CEOs today are now earning more money than they did before the bailout. And while the middle class of this country collapses and the rich become much richer, the United States now has by far the most unequal distribution of income and wealth of any major country on Earth.

As you read the excerpt of the speech given by Sanders, could you possibly imagine Hillary Clinton saying anything close to these words? While Bernie Sanders is outspoken, Clinton is careful never to utter a sentence that doesn't correlate directly to public opinion polls. After all, she was against marriage equality before it became a popular cause, and even against the decriminalization of marijuana before polls moved toward legalization.

Bernie Sanders is a champion for middle class Americans and even his greatest detractors can't deny this fact. He's brash, honest, and willing to risk political expediency for justice and valued principles. While others will have to defend themselves from controversies dating back into the 1990s, voting for Sanders in 2016 shouldn't frighten Democrats. Iowa and New Hampshire can send a powerful message to Democrats around the country by choosing Sanders over Clinton.

If it's Bernie and Jeb in 2016, who would you choose? The choice is obvious for most Americans. Bernie Sanders echoes the voice of millions, while Bush and Clinton say the same things they've always said, to the same people who fund their campaigns. True, Bernie Sanders might be to the left of Clinton, but his views on everything from foreign policy to Wall Street resonate with enough people to be a real danger to any GOP challenger.

Read more on Bernie Sanders below: