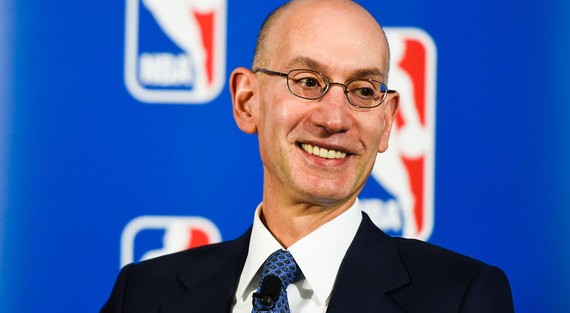 As a man who has some very future-forward ideas on where and how to lead the NBA while at the helm as commissioner, I'd like to ask you to re-visit the current "one-and-done" rule that has been in place since 2006. Now, I'm sure you've been very outspoken on this topic in the past, going so far as saying that you'd consider a push for a two-year minimum college stay or an age 20 and up requirement. This has likely been met with a share of those who would approve and also diverge from the thought.

I'd like to offer thoughts from the latter. As every issue has its cons, these ideas carry a few substantial pros as well.

In my humble opinion, there is not much one year of college is doing for a lot of players. Now, you may say that is the reason why extending the stay in college to two seasons may be the answer to that issue as another year would possibly provide an enrichment of maturity on and off the court and even money management lessons because yes, what is a young 19-year-old to do with millions of dollars? I guess it honestly takes the player to surround themselves with people who will aid in those endeavors, playing college basketball or being in college period does not necessarily teach those things. But hey, that's not the issue right now.

What I would like for you to do is this: think about the thought going back to the freedom that is the high school to NBA phenomenon, only this time you should look to expand the D-League, which could provide a happy medium for many sides to this situation. How would it sound to give every NBA team it's own "farm system", sort of like the one that exists in Major League Baseball. As a commissioner who seems to be big on the global image of the Association, which, by the way is amazing, how could you turn down a greater investment in the NBA's next stars by enhancing the quality and even competitiveness of the Developmental League? WHO WOULDN'T WATCH D-LEAGUE GAMES, THEN?

Here's how it would work:

If a team is to draft a high school guy and provides them with valuable experience via the Summer League, camp and the preseason but still may be unsure about their progress or how they could immediately contribute to the team once the regular season arrives, send them down to the D-League, much like teams do now. Changing the rule to how it used to be would more than likely increase the number of guys willing to make the jump, seeing as the one-and-done dynamic has taken college basketball by storm, but what it also would do is strengthen the appeal of the D-League to fans and players. Besides, research shows, the later a player stays in college, the later he will be selected in the NBA draft, which means a lesser salary.

In this way, a player is learning from an NBA-level coaching staff, gaining knowledge and exposure on and off the court to things that a college coach, especially those with no NBA experience may not have been able to teach.

For clarification purposes, not every player will be required to go to the D-League, we'll leave that up to the respective team.

This would also look to eliminate the issue of compensation for players that schools are seeing astounding amounts of profit from. I'm gonna go out on a limb and assume the league's forthcoming Collective Bargaining Agreement will allow for a few more salaries. College basketball players among other college athletes bring home the bacon for athletic programs. To me, this seems like the perfect compromise for those who are garnering profit for the programs they play for but not personal profit for their talents. However, that issue is for a totally different letter, though, Mr. Silver.

Will this be a hindrance for the college basketball landscape? I think not, the sport will always be highly entertaining, heart wrenching and competitive, especially in March and April, traditionally. College coaches will just have to adjust on the recruiting trail. This opens up the opportunity for another tier of overlooked but talented players to score scholarships at good programs.

I think a two-year minimum stay in the college ranks would eliminate a bit of parity that currently exists. Just think, who will beat a Kentucky Wildcats team with Devin Booker, Karl-Anthony Towns, and others, or a National Championship winning Duke Blue Devils team with Jahlil Okafor, Justise Winslow and Tyus Jones among the current freshmen on their respective roster? That would be no fun to watch.

Guys like the aforementioned Towns and Okafor are guys that were built for NBA level competition straight out of high school. Today's NBA is arguably more talented than it probably has been in a very long time and even some of the best and brightest talent were victims of the one-and-done tragedy. Fortunate for them, the gift has always been there.

Which brings me to my next point.

The thing about it is, the High School to NBA dynamic worked! Not everyone was going to be a Kevin Garnett, Kobe Bryant, LeBron James or Dwight Howard, for every one of those guys there is a bust like Kwame Brown or role players like JR Smith. As said, that's inevitable. Busts are even produced with four years of college.

Sure, an extra year of college may challenge standouts to come back and learn things about their game that was not so clear their freshman season, but the expansion of the D-League allows for that development to reach greater heights simply due to the environment in which these guys are exposed to.

Although you can argue that every top recruit or recruit who feels they can make that jump doesn't have great NBA potential, I may also argue the amount of time a player stays in college never has been the prime indicator on how good they will be by time they reach the draft. Some guys are just supremely talented enough to succeed at age 18.

It's worth a thought, Commish.