It's not well known that Israel, Iran and the United States have all signed a nuclear arms control treaty. It's the Comprehensive Nuclear Test Ban Treaty (CTBT), which bans all nuclear test explosions.

Israel, Iran and the U.S. also host detection stations to make sure no country cheats this treaty. These are stations that detect seismic activity or radioactive particles that would signal a nuclear weapons explosion. This international monitoring system is meant to catch any country that tries to do secret nuclear tests in violation of the CTBT. 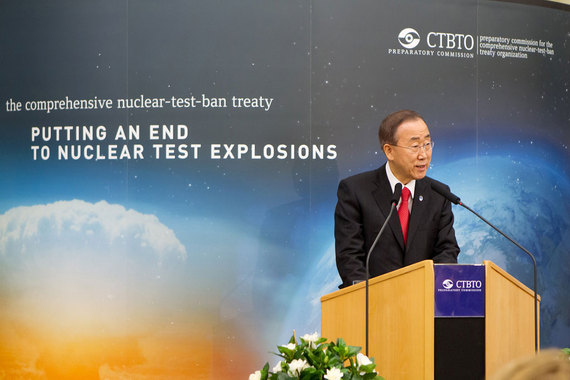 So if you are worried about nuclear weapons, this is a treaty you want to be fully active. But here's the catch. It's not. Neither Israel, Iran, or the United States have ratified the CTBT. The treaty has not taken effect worldwide yet as a result.

Iran's detection stations are also not transmitting data to the CTBT international monitoring system's headquarters. Some are still not certified or just in the installation phase. Iran has not yet signed a required activation agreement with the CTBT.

So these stations in Iran, at this time, cannot detect secret nuclear explosions anywhere. Iran has to get all the stations up and running, conclude a facility agreement and ratify the treaty.

The CTBT global monitoring system does have hundreds of active stations in many countries right now. The system was able to detect North Korea's nuclear tests. But clearly you want the system to be at full strength and fully operational to ensure detection across the globe. The treaty needs to be fully ratified.

Besides Iran, Israel and the United States five other nations including China, Egypt, India, Pakistan and North Korea have also not ratified the CTBT.

The United States failing to ratify the CTBT certainly harms any chances of other nations joining. The U.S. has to take the lead on the control of nuclear weapons. As the world's leading power you cannot shirk that responsibility.

Other nations are closely watching the United States. China, for example, it is believed would very likely follow the U.S. in ratifying the treaty. Russia has already ratified the CTBT.

If the United States were to resume nuclear testing, how long would it be before Russia or China does as well? New nuclear tests would stimulate an arms race.

Israel is said to be closing in on ratifying the CTBT. The detection stations on its soil are active.

Israel could ratify the treaty along with Iran to build on the momentum for nuclear peace in the Middle East. It's especially timely with the announcement of the new agreement with Iran on its nuclear program.

Lassina Zerbo, the director of the CTBT organization, says,

"I welcome the agreement reached between Iran and the P5+1. I hope that this development will create new momentum towards the entry into force of the Comprehensive Nuclear-Test-Ban Treaty (CTBT). I invite all States that have yet to do so to sign and ratify the CTBT. The Treaty offers a powerful confidence-building measure to underline a State's commitment not to develop and test nuclear weapons."

In the Middle East there has been momentum for getting the CTBT ratified. Jordan, for example, recently hosted a treaty exercise for the inspection process.

It's vital the CTBT enter into force for many reasons. It's a major psychological step for the world to move closer to nuclear disarmament. That goal, although a long way off, is crucial because of what is at stake. The continued reliance on nuclear weapons drains the resources of all nations. It's also dangerous to allow these weapons to proliferate when the threat of terrorist theft is very real.

Peace cannot be built on nuclear tests. If you want to talk about international tensions, nuclear testing is right at the top of the list. It's scary! For any nation to resume nuclear testing would take us all down the road toward instability, increased tensions, a costly arms race and the threat of war.

The recent Iran nuclear deal can be bolstered with ratification of the CTBT. This would enhance the confidence building process between the U.S., Iran and Israel.

The coming months will be intense debate on whether the new Iran deal will be approved. But it should also bring to light the overall question of whether enough is being done to prevent nuclear weapons globally. Failure to ratify the CTBT suggests that answer is no.

The United States, Israel and Iran should all ratify the CTBT to close the door on nuclear testing. It's a vital step toward peace and a step away from nuclear weapons.