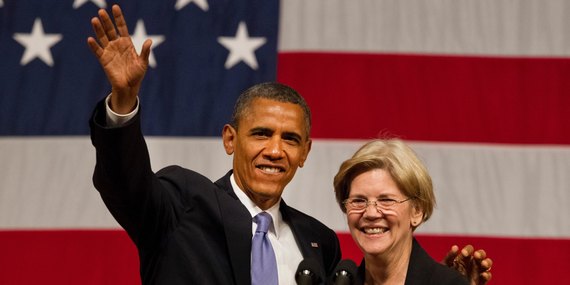 President Obama's 2015 State of the Union address reminded many of us exactly why we'd worked so hard to elect and re-elect the guy: He's on our side.

And by "our," I mean the 99 percent of Americans who would be better off if our economic system weren't rigged by the other one percent. The proposals at the heart of President Obama's 2015 State of the Union address speak directly to the way this economy is experienced by regular people -- people who've seen their wages stagnate, their debts pile up and their prospects dim even as the stock market surged.

As the president noted, the jobs market is surging at last -- and now we face a choice: "Will we accept an economy where only a few of us do spectacularly well? Or will we commit ourselves to an economy that generates rising incomes and chances for everyone who makes the effort?"

The president's answer is an economic agenda -- from free community college to guaranteed sick leave to affordable child care -- that might not make CEOs happy, but polls show that it's enormously popular among just about everyone else.

On issue after issue, this is the President Obama we fought for. Not on everything; his push for the odious Trans Pacific Partnership, for example, puts the president sharply at odds with his progressive base. But throughout most of his speech, the Democrats in the Capitol chamber weren't the only people cheering tonight: The president's supporters were celebrating across the country.

So what put this progressive spring in the president's step?

We'll all hear a lot of punditry on that question over the next few days: maybe the president and his team feel liberated from the constraints of elections now that the 2014 midterms are over. Maybe he's finally showing his true colors. Or maybe he simply recognizes that inequality in our economy is a fundamental challenge for our country, and wants to do something about it.

All of those are probably part of the answer. But I'd like to offer another factor: Elizabeth Warren -- and the progressive movement that's been fighting alongside her.

Both in substance and style, President Obama's State of the Union address echoed the voice of the senior senator from Massachusetts -- and the vision that she has championed since before she took office.

From her pathbreaking research on the bankruptcy system, to the creation of the Consumer Finance Protection Bureau, to her first campaign -- in which she ran not only against Scott Brown, but against an economic system dominated by Wall Street and other monied interests against the interests of the middle class -- her public life has been defined by a single purpose: Standing up for the working families that have been, as she puts it, "chipped, squeezed and hammered." At every step, Warren has risen to a series of David-versus-Goliath fights, battling special interests and the politicians who serve them, regardless of party -- and, in the process, she's become an electrifying national figure.

Today, both her message and her happy-warrior political style are shifting the national debate in a more progressive direction. Her vision of an economy where everyone has a fighting chance has become the jumping off point for the 2016 contenders -- of both parties. Even the likes of Jeb Bush and Mitt Romney seem to crave a touch of that Elizabeth Warren magic, as they make a rhetorical (if not substantive) economic appeal to a middle class that, polls say, still feels left behind. (When a Wall Street Journal/NBC News poll last November asked "Are the nation's economic and political systems stacked against people like you?", 56 percent of Americans said yes--the highest rate in 22 years.)

That's not to say that inequality, poverty, and middle-class wages would be invisible issues if it weren't for Warren -- they've been hallmarks of Obama's political life, and the political lives of most Democrats. And to credit Warren certainly isn't to deny credit to President Obama: his agenda, as laid out in this State of the Union address, reflects both years of intensive policy development and a commendable boldness in the face of a reactionary Republican onslaught.

But there's no mistaking it: On the fundamental economic issues of our time, Elizabeth Warren, and progressives fighting alongside her, have re-framed the debate.

Warren's message speaks to the hunger of the American public for a government ready to fight on their behalf. By giving voice to that hunger, by championing an authentic, principled brand of politics that decisively rejects "Third Way" corporatism -- and by showing, with help from the resurgent progressive movement, how powerfully the public responds to that kind of political courage -- Warren helped clear the path that President Obama triumphantly strode down tonight.

Tonight, the president rallied the nation to challenge an economic system that has ill-served regular Americans for far too long.

Senator Warren, and the grassroots movement she has so inspired, helped make that possible, by showing that at this time in American history, such a battle cry would could take wing. Tonight was their triumph, too.