Women over the age of 50 have been complaining ever since their 50th birthday parties that men their age prefer younger women. Yours truly, Life in the Boomer Lane, has written several posts that attempt to dispel that dangerous belief. She has been unsuccessful. She now throws in the towel and joins the other side. As soon as she hits "Publish" on this one, she will don her protective gear so as to better survive the irate comments of men who are now blissfully partnered with perfect younger women, younger women who are insulted by LBL's sarcastic portrayal of them, older men who are insulted by LBL's calling attention to their nose hair and older women who believe LBL is making a mockery of a very real and tragic situation. This leaves only those readers who inadvertently stopped by, believing they would be getting a great recipe for spaghetti carbonara.

1. Younger women are universally hot and want sex all the time, except when they are reminding you to take your meds, cooking you great meals or sitting with you in front of the TV, watching all your favorite sports teams in action.

2. Younger women are universally hot and can explain all of the latest music, social media trends and technology to you in a way you can completely understand and appreciate.

3. Younger women are universally hot and would prefer to be in bed by 9 P.M., rather than going out to a trendy club.

4. Younger women are universally hot and take a sincere interest in learning everything they can about the '50s and '60s and '70s.

6. Younger women are universally hot and are attracted to men who are paying alimony and/or child support.

7. Younger women are universally hot and become easily aroused by nose and ear hair and reruns of "Gilligan's Island."

8. Younger women are universally hot and know all the latest clothing styles, but prefer men who wear shorts, black socks and Crocs.

9. Younger women are universally hot and stay that way, no matter what.

10. The most compelling reason for the older man/younger woman scenario is the maturation rate of women vs men. The following graph shows this. You can see by following the age/maturation rate for both men and women that the optimal pairing is a 25-year-old woman with a 75-year-old man. Case closed. 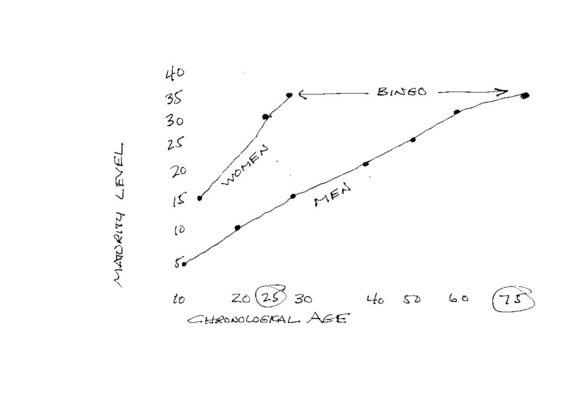