While there are a lot of ways to screw up a marriage, spouses who have close opposite-sex friendships are toying with one of the riskiest and most short-sighted behaviours that commonly lead to infidelity and ultimately divorce.

Many of my consults begin with a client saying something like this: "My husband is constantly texting a female co-worker...he says they're just friends and that they only talk about work, but he's always laughing and smiling when he's texting her."

Or this: "I know my wife is always texting or on Facebook with her personal trainer. Now she locks her cell phone and has changed her online passwords. If I ask her who she's talking to, she freaks out and says I'm being paranoid, jealous and controlling."

Do you know what the above scenarios have in common? In both of them, the spouse who is having the opposite-sex friendship knows full-well that the behaviour is as shady as hell. But instead of respecting their spouse's feelings, they continue to indulge in the ego-boost or thrill of it all.

Some people don't agree with my stance that opposite-sex friendships should not exist within marriage. Some people might say that it is old-fashioned and that men and women are perfectly capable of having platonic extra-marital friendships with a person of the opposite sex.

In cases where the friendship involves two people who have absolutely no sexual attraction to each other and who are not sexually compatible whatsoever, that is true.

But in reality, many opposite-sex friendships involve people who - if circumstances were different - might be potential sexual partners. Indeed, many opposite-sex friendships are maintained because of a simmering attraction. One or both people are keeping their "friend" on the back-burner as a potential mate in the event their current relationship ends.

This is especially true of men. It may be 2015 but, let's face it, many men still only befriend women they have at least some degree of physical attraction to.

In my opinion, this is a self-focused and naïve way of thinking. It ignores the reality that every marriage goes through ups and downs. When you're "up," things are great and the opposite-sex friendship may be mostly harmless (although it still may be an irritation to the other spouse).

But it's a different story when you're going through a temporary "down" or rough patch in your relationship. This might be some kind of conflict, sexual dry spell, life circumstance or even pure boredom. When this happens, many people turn to their opposite-sex friend as a shoulder to cry on.

Before you know it, the spouse and his or her extra-marital friend are comforting each other, turning to each other for advice, sharing details of their intimate life and relationships, and texting each other with increasing frequency and intimacy. As the excitement of their forbidden friendship grows, the dynamics in the marriage deteriorate. After all, three's a crowd.

The spouse begins to leave the room to text his or her opposite-sex friend, leaving the other spouse in a state of anger, anxiety and profound hurt. When asked to end the friendship, the spouse often becomes indignant or outright belligerent, and may try to turn the entire situation around so that his or her spouse must go on the defensive, desperately trying to explain -- to no avail -- why the opposite-sex friendship is wrong and how it is affecting the marriage.

In my capacity as a couples mediator, I can tell you that the vast majority of infidelities I see nowadays follow a similar pattern to this one. They start with an opposite-sex friendship that quickly becomes intense and emotional due to the false sense of intimacy involved with text-messaging. They then escalate into a full-blown emotional or sexual affair.

Not only are opposite-sex friendships within marriage risky, they are a form of betrayal. When a person gets married or enters into an exclusive committed relationship, that person expects to be his or her partner's lover, closest and most intimate confidante, and priority. Of course, we all need close friendships outside of our marriage; however, there are plenty of people of our own gender to befriend.

Opposite-sex friendships can also sneak-up on people in otherwise happy relationships, particularly when the opposite-sex friend is a "partner predator," something I describe in my latest book, Couples in Crisis: Overcoming Affairs & Opposite-Sex Friendships (and will discuss in next week's blog).

This kind of opposite-sex friend may come across as innocent, but is drawn to someone who is already "taken" and can be very manipulative and aggressive in their pursuit of this person. If they manage to befriend your spouse, get ready for a world of trouble and drama.

In my opinion, it's simply foolish to disregard the strong association between opposite-sex friendships in marriage and infidelity. Deciding that these have no place in your marriage is one of the wisest and most pro-active measures you can take to protect the integrity of your relationship in the long-term.

It isn't weak or insecure to do this. It takes a strong person to stand by their values and to insist that there be no opposite-sex friendships within marriage. It takes a secure person to say, "I'm not living like this. I won't live with the uncertainty and the anxiety and the divided loyalties. I won't pretend that I'm not hurt because you're putting energy into this friendship instead of our relationship."

Stand by your values and vision of marriage -- you know, that whole "forsaking all others" business -- and trust your instincts.

PHOTO GALLERY
Cheating And The Sexes
Download
Calling all HuffPost superfans!
Sign up for membership to become a founding member and help shape HuffPost's next chapter
Join HuffPost 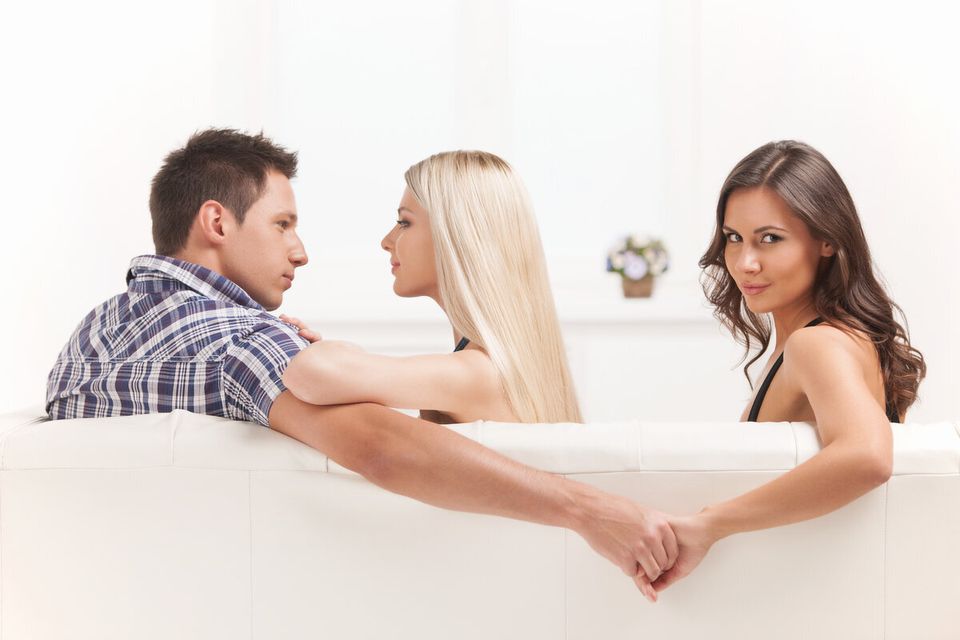 1 / 12
More Women Think Infidelity Is Wrong
In the General Social Survey, which tracks how Americans think on a variety of issues, a majority of men and women both said that infidelity when married is always wrong — but more women agree. At least 78 per cent of men think cheating is never okay when you're hitched, while 84 per cent of women share that sentiment. In the 1970s, those numbers were 63 per cent and 73 per cent respectively, so both men and women are more likely today to be anti-infidelity, and the gap between the sexes on the subject has narrowed over the time.
Shutterstock