We all know about this go-to-Mars-and-never-come-back-thing, right? If not, type "Mars One" in any electronic device and check it out (warning: vacuum cleaner may not work).

I'm totally sure that the idea of a one-way trip to the Red Planet significantly contributed to the media success of this project. Nevertheless, every single time I answer questions from the public, fans and reporters, I get stuck on this point: the "no-return policy."

Everybody estimates the risks from cosmic radiations, Space-X thrusters' malfunction and local alien guerilla to be acceptable, part of the astronauts' job. But then they come up with the dramatic question: "What do you hate so much about this planet to leave it forever?"

Here's the point: I'm leaving the Earth forever because I love this planet! All of it. No kidding.

Of course, there are a number of reasons for joining the Mars One program, which would never fit all together in a single blog post. Moreover, I already explained the emotional, personal reasons in the documentary, Citizen Mars.

Yes, I'll be leaving a huge bulk of friends, colleagues, cousins and - who knows? Maybe a kid or two -- on this Blue Planet. I disagree with those who consider Mars an emergency exit from Earth, our b-plan for species survival.

So how can we help Earth's environment and inhabitants, burning down 600,000 US gallons of kerosene to launch the outpost and the crew to a dead, freezing, red desert? The answer is simpler than expected: we won't have toilet paper. 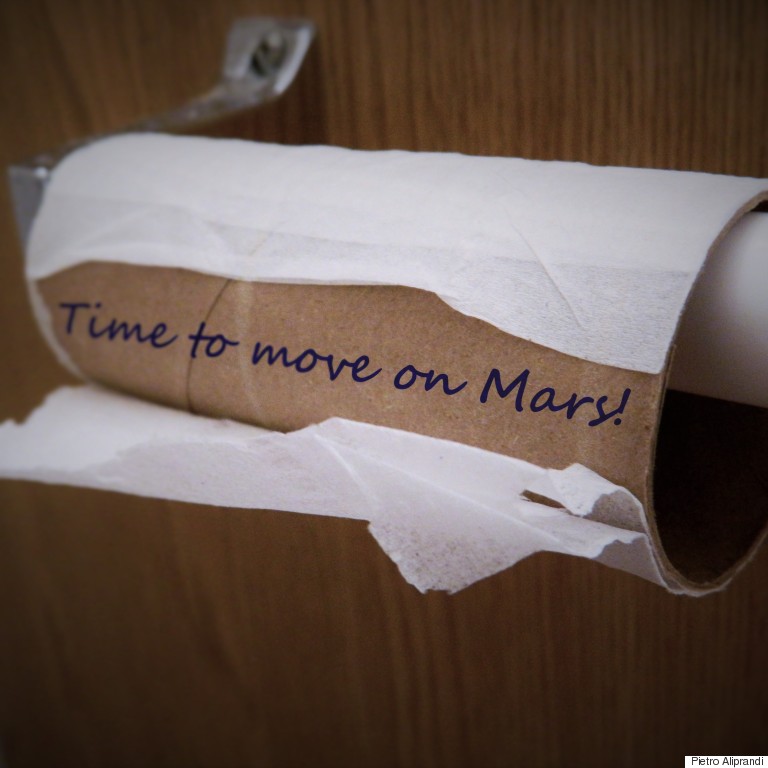 Seriously, no sketchbooks, paper towels, trash plastic bags or any other disposable stuff. Have you ever thought about it? Mars outpost will only rely on a limited number of resupply missions, which will carry almost only computer parts and high-tech hardware, medications and frozen food.

Try to imagine your everyday life without any of the disposable items you use. It would feel prehistoric, no doubt. Now, try to imagine the same scenario, but where you didn't renounce to all your western modern-human amenities - you just got rid of the "disposable" attributes. This second picture should feel closer to a sci-fi setting. That is exactly how we'll be surviving on Mars: some of the needed recycle technologies already exist -- the rest will be properly developed.

Recycling 99.9% of items on Mars will not only be affordable for Bas' pocket, but also a driving force to further develop and apply such technologies on Earth. A round-trip would not be as effective as a permanent settlement in promoting this and many other technologies on both planets.

Still wondering how many space-derived everyday-living amenities we have? Check your pockets: your smartphone was born after computer advances for Apollo missions. My only grudge is that 1.5 billion people on Earth own a mobile device with enough computing power to take a spacecraft to the Moon and back home - and 10% of them use it just to play Candy Crush Saga.