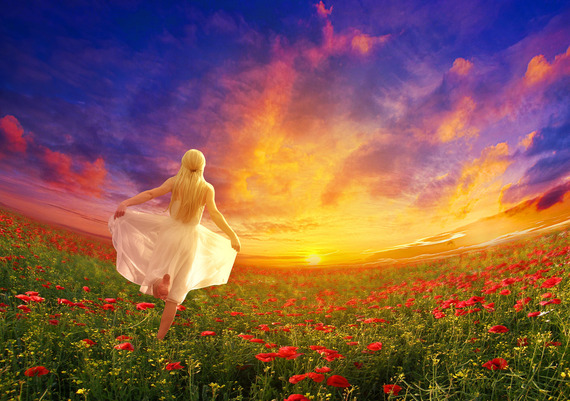 Photo by Chiaralily as found on Flickr Creative commons

I can't tell you how many times I've read this posted underneath a photo on Instagram or Facebook. A photo of a woman with a smile on her face against an amazing backdrop of a cool building or beautiful scenery. She probably also mentions how she doesn't look that good. In her caption she will blame the heat or the cold, a long hike, or the weather. Anything to explain why she doesn't look perfect, even though she looks great. Because, somehow, in an industry where we are supposed to search for adventure, get dirty, wet, muddy, and sweaty, we are also supposed to be beautiful. And, in a way, we are punished when we are not.

Take a scroll thorough your Instagram feed and focus on the accounts of the top female travelers. How many of them post photos of themselves in a bikini? Check the likes on those photos and compare them to the numbers of likes on photos where they are more covered up. Notice a difference?

Or what about the accounts that showcase female travelers? The ones that every travel girl tags in her favorite 'grams, the ones with thousands of followers. Take a look there and see how many bikini-clad or short-skirted women with perfect hair and flawless skin are featured. There's a lot, aren't there? Now look for the red-faced, sweaty ones with frizzy hair from hiking in the rain or humidity. It's near impossible to find them, and it's not because they don't exist. They do, and some of their photos are incredible. But the women themselves... well they aren't "pretty" enough in these photos to make the cut.

Don't get me wrong. I am not bashing these accounts or the women featured in them. I follow a lot of them and am as guilty as everyone else for liking and thinking that these photos, with their perfectly posed women, are beautiful. But are they real? Are they real in the sense that they are showcasing what life is really like for most female travelers? Do women actually sit with their breasts out, hips cocked to the side, and a sexy pout on their face? Do that many women actually wear makeup and straighten their hair to go to the beach? I don't, and nor do any of the female travelers I know.

While I admire these photos for their aesthetics, I can't help but think that we have let artistry overcome reality. That these, admittedly stunning, photos buzzing around the internet have gotten out of hand and actually go against what I, and so many other bloggers and female travelers, are trying to do: encourage women to travel. We already live in a world where women doubt and dislike themselves and struggle to feel pretty and good enough in their everyday lives. By focusing so much on physical beauty, are we turning the travel industry into the next Hollywood or fashion runway?

I'm afraid that we are. 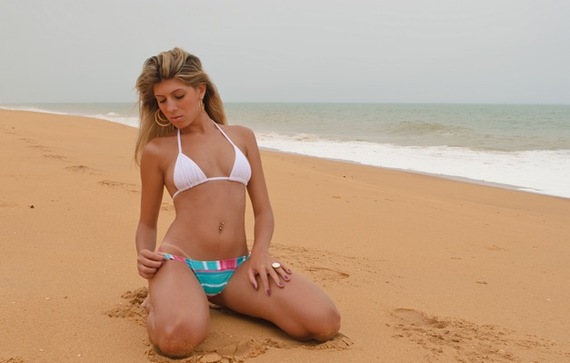 Photo by Emanuely Porto as found on Flickr Creative Commons

A little over a month ago I wrote about my travels in Thailand. Not what I did or saw but how I felt. Because the truth is, as a curvy girl, I was scared to visit Thailand. I was afraid that my non bikini-body wouldn't fit in. That I would stand out too much, be teased and harassed for not looking the part. I'm thrilled to say it wasn't the case, but I was still apprehensive about it. Why? Because when I looked into Thailand I didn't see photos of bigger girls lying on the beach or exploring the jungles. I only saw photos of lithe, toned bodies in string bikinis and teeny shorts.

Since publishing that article I've learned I'm not the only one. Women around the world choose not to visit certain places because they don't think they look the part. And it's not just places like Thailand. I've heard countless stories of women who avoid all beaches because they "aren't skinny enough." They would rather stay inland and avoid exploring some of the most beautiful places of the world because of fear. Fear that they don't fit in because of how they look.

That's not right. Nor is it true. But somehow, among all the filters, poses and prepping, we have allowed it to seem that way. Somehow the pretty girl smiling naturally on the beach in her bikini isn't sexy enough. The casually dressed girl walking through the cobblestone streets in Paris with the look of awe on her face isn't wanderlust-worthy enough. It's no longer enough to just capture happy moments. While they might be ok for your personal scrapbook those photos won't get noticed publicly. To do that they need to look like ads for a Victoria's Secret or a MAC cosmetics campaign.

My complaint with this isn't just about making women feel unworthy and unwelcome. While I hate that so many women feel they can't travel because of their looks, feeling out of place isn't my only problem with this unnecessarily quest for beauty. Wherever I travel it seems that vanity has somehow bested cultural appreciation. I can't tell you how many times I've seen young women visit historic churches, ancient temples and even walk down the streets of more conservative nations dressed completely inappropriately.

A few months ago I visited Chiang Mai's famous mountain-top temple, Doi Suthep, to discover two girls making a scene about having to cover their bare legs and shoulders. When they (finally) covered themselves up to enter I found them quickly taking off their shawls and scarves when they thought no one was looking to take photos in front of the gilded domes. I cringed at their insensitivity and rudeness, knowing that these photos would soon be blast over their personal social media accounts. And while I hoped that these particular photos wouldn't be shared or featured, I knew that those that did see them would see it as validation to do the same.

How did this happen? How did going on an adventure become synonymous with looking like you walked out of the pages of a magazine? How did embracing new cultures get swept aside for the sake of a "perfect" photo?

It's not just the bloggers and Instagram accounts to hold at fault, although in our hunt for more followers, likes, and better numbers, we definitely play a role. But it's also the travel companies, cruise lines, and tourism boards that run advertisements with perfect, airbrushed models. It's the clothing lines that design the "perfect travel wear," that looks like it belong in a nightclub and only runs up to a certain size. Travel is a massive industry, with multiple facets, and all are to blame.

But we can change that. Especially the bloggers, photographers, and videographers and the avid travelers who understand that travel isn't always pretty. That it's not even about being pretty, but about being empowered, about learning and embracing different cultures. We can help create the change needed. We can shift the focus to what really matters: the adventures, the thrills, the happiness and smiles that really are beautiful, even if they are accompanied by frizzy hair and sweaty skin. Let's focus on what women who travel are doing and not how they look while doing it. Because that's what is really sexy.

PS: If you are a travel girl who isn't afraid to post your sweaty-faced, frizzy-haired photos of your epic adventures check out my new Instagram account dedicated to feature amazing female travelers in their natural glory: She_wants_adventure. You can use #shewantsadventure on your best travel pics to be featured. 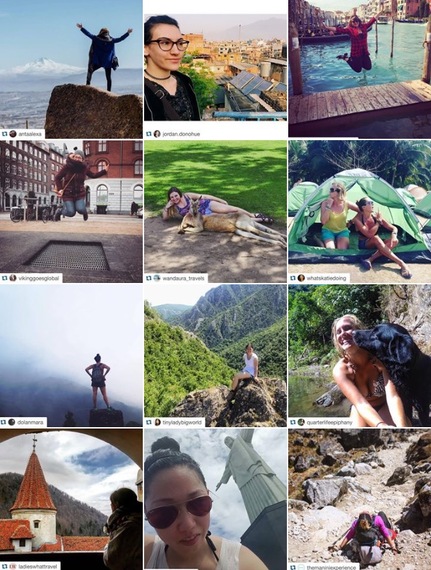