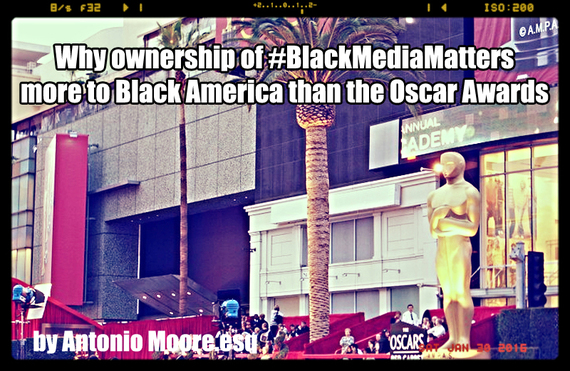 The discussion of diversity in Hollywood, or the lack thereof has been at a fever pitch since the nominations for the Oscar awards were released. This announcement by the Academy Awards was followed with videos made by several celebrities announcing boycotts, and attempts by the Academy to regain their trust with a quickly enacted change in the awards voting policy. Yet, the real discourse on diversity and inclusion does not center on who is in front of the camera, nor who is even directing its lens. The conversation should be focused on who owns the camera, and the content it's used to create. #BlackMediaMatters and it is inside of ownership where you see the starkest disparity between blacks and whites across all major platforms, film, television, print and digital. To give context, according to a recent FCC filing with regard to full power television stations.

"There are now zero black-owned and operated full-power TV stations in our country," said Joseph Torres and Derek Turner of Free Press, which blamed the FCC's relaxing of TV ownership regulations for the current situation. "This policy shift crowded out existing owners of color and ensured that it would be nearly impossible for new owners to access the public airwaves,"

While the nomination for an Oscar serves as a symbol of diversity, it does little to address the lasting effects that the disenfranchisement of blacks in media has had on content, employment and wealth for Black Americans. I recently spoke to African American media mogul Byron Allen on the issue. Allen now worth well over a billion dollars by some recent assessments, is championing the inclusion of black owned media companies, by bringing multiple large sum lawsuits against cable companies that he argues exclude majority owned African American companies from carriage deals. He settled one suit with AT&T late last year, and recently filed a $10 billion racial discrimination lawsuit against the FCC & Charter Communications. In speaking with him on the issue, he stated, "This is the fourth and final chapter of economic inclusion, Coretta Scott King was a friend and she stated African Americans have faced four major challenges, 1. Ending slavery 2. Ending Jim Crow, 3. Achieving civil rights, and 4. The fight to achieve economic inclusion." Allen continued, "Diversity starts with ownership, it is time for black people to check the numbers. There are two Americas, blacks are part of the other America that has been excluded from access." In the suit against Charter Communications and the FCC, Allen claims

The context of Black owned media cannot be understood without a grasp of American history that takes us deeper than diversity, back to a place of plain old black and white segregation. A look into a time before we had the category people of color, when our country simply had colored people that struggled within chattel enslavement, which was followed by the federal government pushing them into underfunded negro neighborhoods divided by redlines. Creating the kind of damage amongst blacks that even the UN has now acknowledged needs reparatory redress. But to truly understand the state of diversity in media, we don't even need to go that far, we can simply go back to the mid nineties, when then president Bill Clinton signed the Telcom Act into law giving many black media companies a blow they could not overcome. Focusing in on radio, as an example of the Telcom Act's far reach Atlanta Black Star wrote

The 1996 Telecom Act was the beginning of the end for Black-owned and Black-formatted radio stations. Backed by President Clinton, the Telecom Act lifted ownership limits and, under the guise of promoting competition in the communications market, ushered in a new era of corporate ownership and deregulation, allowing huge companies to gobble up stations across the country. As a result, local programming, news, music and voices have been systematically homogenized, and Black radio's microphone has been muted ... Just six years after the Telecommunications Act went into effect, two companies, Clear Channel and Viacom, owned two-thirds of the country's radio stations -- with Clear Channel quickly going from 40 stations to 1,240 stations, 30 times more than Congressional regulation previously allowed. In many cities, virtually overnight Black radio stations ceased to exist, with the familiar Black spot on the dial changing format to sports or even country music. In the years immediately after deregulation, more than 10,000 radio employees lost their jobs, according to a report by Common Cause.

This is how you can destroy a struggling community's access to wealth through media, and it is why black media matters so much today. Ownership means you can control who is hired at these stations, what messages are displayed in representing your oft fragile image, and how much time is allotted to entertainment versus substantive dialogue in content. According to Steven Renderos, National Organizer with the Center for Media Justice "Ownership is a central part of our communities struggle to push back against stereotypes and misinformation. It is simply not enough to have access to the airwaves if we don't also own the means of distribution." That is what makes Allen's lawsuit so interesting, it isn't a new assertion, rather it is the direct result of disregarding the warnings. FreePress.net stated

Public interest and civil rights groups have warned the FCC that its policies allowing for greater media consolidation were going to push out the few remaining people of color who owned broadcast stations. Media consolidation has made it harder for people of color to own broadcast stations because it raises entry barriers for small owners. Concentration makes it harder for any small owner to compete, and the few non-white broadcast licensees we have are far more likely to be small owners who control just a handful of stations or a single broadcast outlet.

As the dialogue around the Oscars continues in the coming weeks leading up to the award show, we cannot fail to realize how much #blackmediamatters to African American communities, and how little the symbol of an Oscar award truly means without ownership of the content being awarded.

Antonio Moore, an attorney based in Los Angeles, is one of the producers of the documentary Freeway: Crack in the System. He has contributed pieces to the Grio, Huffington Post, and Inequality.org on the topics of race, mass incarceration, and economics.