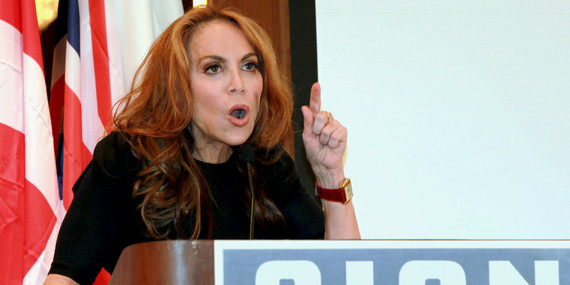 First and foremost, nobody deserves to die or experience harm for drawing a cartoon or espousing beliefs viewed as hateful and intolerant. As I wrote after the Charlie Hebdo massacre, offensive speech never warrants violence, regardless of its inflammatory nature. Any plot to hurt anyone, including Pamela Geller, must always be condemned.

Basic logic, however, dictates that the average Muslim citizen has absolutely nothing to do with ISIS. When George W. Bush stated in 2002, "Ours is a war not against a religion, not against the Muslim faith," he was speaking directly to people like Pamela Geller. The man you meet tomorrow driving a taxi in New York or at the hospital performing a surgery might be Muslim, but chances are he certainly won't be the venomous caricature propagated by Geller's website.

Dissent and free speech aren't "crushed" by debate, nor is provoking fanatics the best way to promote public safety. The Mayor of Garland, Texas didn't show "intolerance" for Geller's cartoon contest by stating in The Dallas Morning News that her event made citizens less safe:

Garland Mayor Douglas Athas, like many in his city, said he wished AFDI president Pamela Geller hadn't picked Garland as the site for Sunday's event.

"Certainly in hindsight, we as a community would be better off if she hadn't," Athas said Tuesday. "Her actions put my police officers, my citizens and others at risk. Her program invited an incendiary reaction. She picked my community, which does not support in any shape, passion or form, her ideology.

Pretending that Geller's words keep anyone safe from terrorism, as if offending "savages" prevents terrorist attacks, ignores how Americans have decided to protect themselves from these threats. The Department of Homeland Security's budget for 2015 is $38.2 billion, the FBI's budget is $8.3 billion, the NSA's budget is said to be around $10 billion, and Americans spend about $75 billion on various other military intelligence services. To date, neither Congress nor any of our intelligence services have asked Geller, a pastor in Florida, or Fox News to "publicize" the scourge of radical Islam (or set up cartoon contests), in an attempt at bolstering domestic security.

In reality, Americans don't need Fox, Sean Hannity, Geller, or anyone else to "expose" the scourge of radical Islam, most people already find ISIS beheading videos to be atrocious. Perhaps one reason that the Southern Poverty Law Center lists Geller's organization as a hate group (or that Paypyal once cut off Atlas Shrugs) is the following commentary from Geller's website in 2008:

It defies logic that the leading Democrat candidate for President could possibly be part Muslim at a time when Islam vows to destroy the West. No matter what your party affiliation, the implications are staggering. He studied the Koran, he knows what's in the book...

If such views are based on logic rather than prejudice, then why would the notion of a Muslim president lead to "staggering implications"? Conversely, pundits like Geller never reference the time Bush danced with the Saudi King, the Taliban visited Texas, or when Reagan told Congress, "We support the Mujahidin."

Not only does Geller's "exposure" of Islam fail to keep anyone safe, but it also fails to address the billions in U.S. weapons deals and security relationships with countries like Egypt, Saudi Arabia, Pakistan and other Muslim nations. If Geller is correct in her assessment that "Islam vows to destroy the West," then she should also explain why according to Reuters, the U.S. recently signed a $1 billion deal to supply Pakistan with "15 AH-1Z attack helicopters, 1,000 Hellfire missiles, engines, targeting and positioning systems and other equipment." The same countries that behead their citizens like Saudi Arabia (because of legal systems based on Sharia law) have for decades received tremendous political and military support from the Unites States.

The U.S. has forged alliances (even with governments that utilize Sharia law) primarily because the Middle East holds 47% of the world's oil and 40% of the world's natural gas reserves. In reality, Geller doesn't "confront evil", as stated by The National Review. Instead, she focuses solely on terrorists and stereotypes while ignoring why Lockheed received $144 million in 2006 "for materials that will be used in advanced F-16 fighter aircraft bound for Pakistan."

Our strategic military partnerships in the Middle East portray our true value system as a nation, so when George Bush signed a $20 billion arms deal with Saudi Arabia in 2008 (a country where legal punishments are based on a "harsh interpretation" of Sharia law), without protest from Fox News, Americans aren't given a clear picture of reality from those who claim to be "fair and balanced." The diatribes of Geller and others against Islam contradict not only U.S. foreign policy, but also the viewpoint of George W. Bush, expressed in a November 13, 2002 meeting at the Oval Office with Kofi Annan:

"Some of the comments that have been uttered about Islam do not reflect the sentiments of my government or the sentiments of most Americans. Islam, as practiced by the vast majority of people, is a peaceful religion, a religion that respects others."

In contrast to Bush, Geller once stated that Islam "is the most radical and extreme ideology on the face of the earth." This disparity in viewpoints highlights the difference among these two individuals. One person started two wars to bring democracy to two Muslim nations, the other is a conservative media personality who simply isn't interested in hearing that Reagan illegally sold 1,500 missiles to Iran.

Yes, although Sharia law is broadly supported across Pakistan (84% of its citizens believe Sharia law should be the law of the land), the Pentagon apparently doesn't have an issue with Pakistan being the 10th biggest arms importer in the world. While Saudi Arabia is even more of a theocracy than Pakistan, it's the world's largest importer of weapons, and most of these weapons have come from the United States. The Guardian writes that in terms of arms deals, "The biggest beneficiary of the strong Middle Eastern market remains the US, with $8.4bn worth of Middle Eastern exports in 2014, compared to $6bn in 2013." Therefore, America is the "biggest beneficiary" in a region of the world that is 91% Muslim, despite the fact that Geller sees Islam as such a grave threat.

Sadly, the right-wing blogosphere never correlates these geopolitical realities to their dire warnings about Islam.

When Fox News says that Geller is "not standing down to radical Islam," they also mean that Geller and others aren't aware that the biggest arms dealer to Middle Eastern nations is the United States. In terms of the West's role in arming Middle Eastern nations (many of which follow the Sharia law that 16 state legislatures have tried to ban) Janes.com explains the reality of geopolitics in 2015:

"When we look at the likely export addressable opportunities at a global level for the defence industry, five of the 10 leading countries are from the Middle East," Moores said. "The Middle East is the biggest regional market and there are USD110 billion in opportunities in coming decade."

The biggest beneficiary of the strong Middle Eastern market remains the US, with USD8.4 billion worth of Middle Eastern exports in 2014, compared to USD6 billion in 2013.

Unfortunately, we could care less if Saudi Arabia doesn't allow its women to drive and is beheading its citizens at a record pace, as long as they don't go elsewhere for weapons purchases.

If the U.S. and other Western nations upheld their value systems by denying military support to Saudi Arabia until it made reforms that bring its society closer to the modern world, there's a far greater likelihood some of these nations would be motivated to provide women greater rights, or refrain from other human rights abuses. Also, anti-Islamic activists aren't aware that Pakistan is helping the U.S. fight the Taliban or that a blogger named Raif Badawi in Saudi Arabia might die because he really is (unlike Geller) a free speech activist. Finally, when stating that President Obama wants to "appease his Islamic overlords," or that "no one seems to understand the magnitude of the Muslim threat," Fox News and others should one day explain to Americans why Saudi Arabia is "the world's biggest arms importer."

These political realities undermine the hysteria and prejudice linking all Muslims to ISIS, as well as the belief such antics keep Americans safe from terror.