Many parents ask us about the benefits of sleep away camp, how much they can expect their child to grow and mature in a summer, and whether the changes will last beyond August. 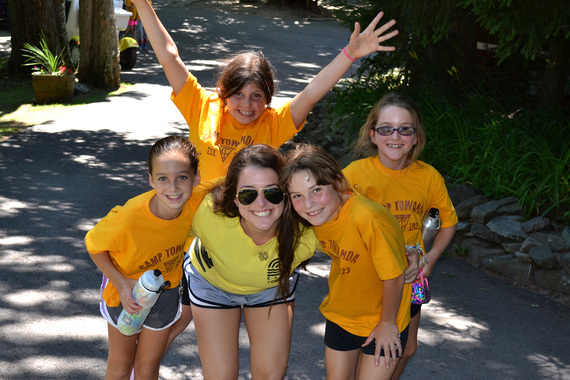 Any veteran camp parent will tell you that camp is not just good for the child, but it's good for the family! If you are a new parent considering camp for the first time, or nervous about whether your child is really ready, we wanted to share some of the changes you can expect after just one summer away from home! It's amazing what seven weeks will do. We of course notice the change in our campers, but we love getting dozens of letters from first-time families who want to know "What's in the bug juice, because we can't believe this is our kid!?"

Here's some of what you can expect even after just one summer at camp.

1. A willingness to try new things

They say the magic happens when you are pushed outside your comfort zone. And that is why they say camp is a magical place. There are activities kids LOVE and activities that may not be "their thing." There is food that they can't wait to eat (pizza day!) and meals that they can't stand to see on the table. Because campers live and operate as a group, they learn to accept their differences, try new tastes and experiences, and learn they may actually like them! One mom shared that her picky-eater used to only eat plain bagels, plain penne pasta, pizza from a particular shop, salad and Hershey Bars. Seven weeks later, she can give him waffles for breakfast (hey -- they have protein), any shape of pasta, any kind of pizza, and whole apples -- not peeled and cut up in slices. She was also amused by his expanded choices at 7-11 (which is like the canteen at home), including Milky Way, Twix and Mug Root Beer. Now while that may sound like a sugary mess... you have to realize that this child seriously expanded his taste palette, made independent choices and may just be ready for Sloppy Joes next summer!

When children experience the reward of trying new things, it makes them want to try more. So many campers look at our climbing wall, and shiver at the thought of reaching the top. After a few weeks of watching their friends and being cheered on by their counselors, most of them will give it a go! The rush and excitement of making it half way, or climbing to the top, or even better, getting to ride down the zip line, is so exhilarating... it makes them more open to trying new things in the future.

What parents are thankful for: Less time spent as short order cook; more time planning new and exciting activities for your child.

2. Pride in taking care of themselves

For seven weeks our campers actually brush their teeth (at least before Visiting Day!), comb their hair, shower and dress themselves. All of these things involve surprisingly very few reminders, negotiating and reluctance. Why? Because they know it's on them to get it done and "everybody is doing it." They also live in close quarters and recognize that good hygiene is important and socially necessary. What a realization! Without mom or dad there to nag them into these responsibilities, it's on them to stay clean and look presentable. Of course there is a learning curve for our younger campers to successfully care for themselves. But once they get it, they feel good to know they can do it themselves! When they come home from camp, they actually find it FUN and empowering!

What parents are thankful for:Shower hour for them is now rest hour for you!

3. Respect for their home and family

We talk a lot about the magic of camp, but we also know there is the magic of home. It's a different kind of magic. The kind where kids drop their dirty clothes on the floor and they magically disappear. The kind where dirty dishes are left on the kitchen table and poof they get cleaned. Does this sound like your home? At camp, nothing magically disappears. Campers are responsible for clearing and stacking their plates, recycling, cleaning their bunk, organizing their belongings, folding their clothes and making their beds. They are held to standards during inspection and feel pressure from their camp family (aka their bunkmates) to uphold their responsibilities. If not, there are consequences. No one wants to let down his or her bunk.

There is also a deeper love between siblings at camp. If your kids are together at camp, they feel more connected in taking care of each other while mom and dad aren't there. Even a couple minutes of sibling time a day at camp increases their love and respect for each other. New campers also enjoy feeling looked after by their camp big brother or sister, and they are more likely to pay those actions forward to their siblings at home. They have a deeper appreciation of what it means to be a big brother or sister.

What parents are thankful for: A child who contributes to the overall tidiness and order of your home. They also may walk their sibling to class, check on them during the day or read them a book at night. And it costs you nothing...unless you want to reward them with allowance!

One of the reasons so many parents say they can't wait for camp is that their child will be unplugged for seven weeks. At camp we are 100 percent disconnected from technology and 100 percent connected to each other. Rest time doesn't equal playing on the iPad, DS or watching television. When your camper comes home, you will be amazed at the activities they gravitate towards during down time. New hobbies like reading, playing cards, making bracelets, writing in a journal, playing ball are a refreshing change for you and them.

What parents are thankful for: Good old-fashioned fun like the old days, such as family game night, bringing a deck of cards to dinner (instead of the iPad) and maybe even a love for books. Imagine a world where you don't have to nag your child to read? Also, your child may enjoy more quiet time in their room... an escape from the hustle of daily life.

5. Awareness and connection to life around them

A few months ago there was a powerful viral video called "Look Up". It was a harsh reminder that many of us (and our children) spend our time looking down at our devices, texting, watching videos, hiding behind technology and living disconnected with our world. At camp we always look up. We look into each other's eyes. Our hands are free for holding, playing and creating. At camp we connect. We are plugged into life. We live in the moment.

Kids learn to really listen to each other at camp. They understand what moves them, what scares them and what it means to be a true friend. They learn the implications of their actions on others, how to resolve differences, how to lead and how to be a part of a group. Because they are forced to live in a bunk with the same people for seven weeks, they understand it's not all about them anymore.

And all of that growing can come from just one summer at camp! Imagine what your camper will be like after two summers, five summers, ten summers!? Talk about potential!

Our last HuffPost blog talked about how you can make the benefits of camp last throughout the year. We would love to hear whether you doing these things at home and how are they going! What's working? What's lasted? Or are you ready for it to be June?

For over 25 years, Owners & Directors of Camp Towanda, the premier, privately-owned, co-ed sleepaway camp in the Poconos, PA. www.camptowanda.com