After my last weekend of yoga teacher training, a friend asked me over dinner, "Why do you do yoga? So you can learn to do what... headstands?"

Why do people do yoga? 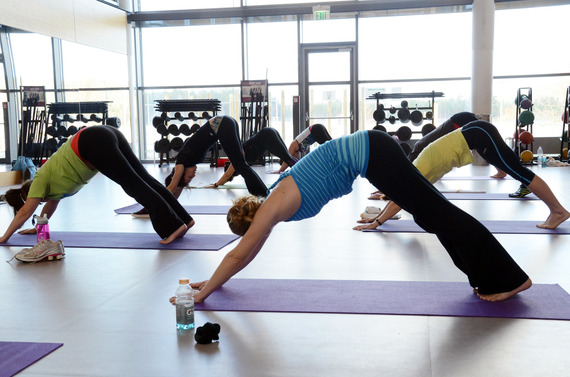 More than 90 percent of people come to yoga for flexibility, stress relief, health, and physical fitness. But, for most people, their primary reason for doing yoga will change. Two-thirds of yoga students and 85 percent of yoga teachers have a change of heart regarding why they do yoga -- most often changing to spirituality or self-actualization, a sense of fulfilling their potential. Yoga offers self-reflection, the practice of kindness and self-compassion, and continued growth and self-awareness.

Yet the health benefits are very real. Yes, yoga can increase your flexibility, improve your balance, and decrease your cholesterol. A recent review in the European Journal of Preventive Cardiology shows that yoga reduces the risk of heart disease as much as conventional exercise. On average, yoga participants lost five pounds, decreased their blood pressure, and lowered their low-density ("bad") cholesterol by 12 points. There is vast growing body of research on how yoga improves health problems including chronic pain, fatigue, obesity, asthma, irritable bowel syndrome, and more.

As a psychiatrist, I am also naturally interested in the brain. While most people intuitively get that yoga reduces depression and anxiety, most people -- even physicians and scientists--are typically surprised to find out that yoga changes the brain.

A May 2015 study published in the Frontiers in Human Neuroscience uses magnetic resonance imaging (MRI) of the brain to show that yoga protects the brain from the decline in gray matter brain volume as we age. People with more yoga experience had brain volumes typical for much younger people. In other words, yoga could protect your brain from shrinking as you get older.

This "neuroprotective" effect of yoga has also been found in brain imaging studies of people who meditate. In some regions of the brain, 50-year-old meditators were found to have the gray matter volume of 25-year-olds. These changes to the brain can occur within a few months. One study found brain changes after only eight weeks of a mindfulness-based stress reduction program. The regions of the brain responsible for learning, memory, cognition and emotional regulation showed growth. In contrast, the areas of the brain responsible for fear, anxiety, and stress shrank.

But the truth is that the practice of yoga is not about changing the brain, body, headstands, or even about gaining greater happiness and joy. If it were, it'd be just like taking a spinning class or doing a set of lunges at the gym. Yoga aims toward transcendence of all those things. In a culture in which we rush from one day to the next, constantly trying to change our health, our body, or our emotions, or to plan our future, yoga opens up the possibility of connecting to what we already have -- to who we already are.

When people tell me that they want to try yoga but don't because they aren't "flexible enough," I tell them yoga isn't about attaining the perfect pose. Use as many blocks as you need. Modify the pose to feel comfortable in your own body. It's not about being "good enough" or "right": Yoga is about removing any judgment and letting us be present to who we are now.

"Practice isn't about trying to throw ourselves away and become something better. It's about befriending who we are already. The ground of practice is you or me or whoever we are right now, just as we are.

We recognize our capacity to relax with the clarity, the space, the open-ended awareness that already exists in our minds. We experience moments of being right here that feel simple, direct, and uncluttered."

Yoga can change the heart -- but we're not just talking about blood pressure.