1995 was a fateful year on the island of Fiji. For the first time, satellites began beaming western television shows to the region, and Fijian girls could watch Beverly Hills 90210 and Melrose Place just like American girls. Suddenly, in a culture where having a well-nourished and curvy figure was traditionally considered beautiful and healthy, and where being too thin was considered unattractive and worrisome, young girls began to diet excessively and develop eating disorders. No longer did they dream of resembling their mothers and other women in their own communities, but rather they began to take their cues from uber-thin Hollywood starlets for how their bodies should look.

These girls knew that television was not real, and that the society represented in these programs existed thousands of miles away from them, yet the girls developed psychological and physical ailments nonetheless.

How many of our daughters today admire actress Jennifer Lawrence, who played Katniss Everdeen in the two recent film adaptations of The Hunger Games? She's well known in Hollywood for refusing to lose weight, and she looks great! But after posing for some ads in Dior's new handbag campaign, Lawrence said, "That doesn't look like me at all... of course it's Photoshop, people don't look like that."

It's true. Most people who are able to stand upright and walk have 24 ribs, a full set of internal organs, and enough weight on their bodies to allow the presence of muscles that propel the human skeleton. 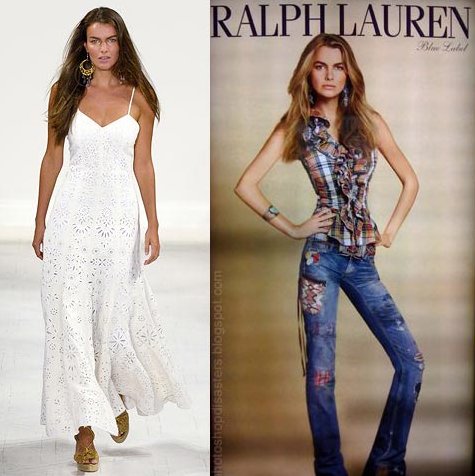 Model Filippa Hamilton, size 8, on the catwalk in the image to the left; photoshopped to the brink of death in the advertisement on the right. Women don't actually have waists that are smaller than their heads.

If you're looking for me, I'm over here, having a glass of wine in the "I don't know what the hell is going on" corner.

When we talk about the need for truth in advertising, many people point to digitally emaciated images of females like the one above and say, "but everyone knows they're fake." I think that's arguable in either direction, but it doesn't matter, because studies show that human beings are greatly influenced by this media, especially children. Interestingly, most people demonstrate the Third-Person Effect: they falsely perceive that mass communicated messages like these photoshopped images fool other people but not themselves.

As parents, we like to imagine our daughters to be third-person-effect exceptions who will remain out of the reach of these purveyors of anorexic beauty ideals because we, as parents, try to be exceptions in our parenting. But even for those of us who deliberately teach media literacy -- which is so very important -- it is not enough. Unless you live in cave, these ubiquitous photographs of the famished female form will negatively affect most kids to some degree. The popular narrative that says otherwise is wrong, and is not supported by research.

Science matters. In 2011, the American Medical Association announced its adoption of a new policy to discourage the rampant use of photoshopping by advertisers because studies have established a connection between the practice, the subsequent distribution of altered/unrealistic images, and adolescent health problems, particularly body image and eating disorders. 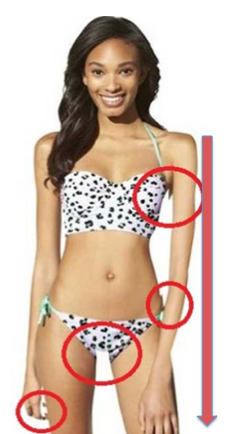 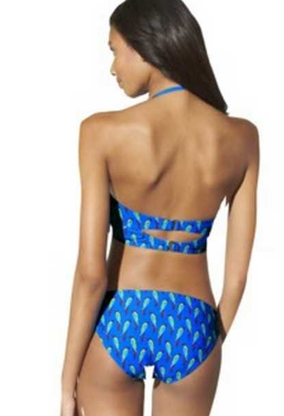 It's not just characters from Disney's "Frozen" that have wrists smaller than their eyes. These ads are from the teen swimsuit section of a Target catalog. As if this model, Tanya Marie Keller, is not already skinny enough in real life or in her digitally altered form, disastrously aggressive Photoshop efforts to create a thigh gap leave her without a vagina. (You can see Ellen DeGeneres's hilarious spoof of these images here.)

In light of the ads above, and hundreds of thousands of others like them that may be less extreme but still act as subtle conditioning, the AMA is right to be concerned. Many studies provide crucial data that connect these ads to negative outcomes for girls. Trust me, this is the short list:

• Three of the most common mental-health problems among girls (eating disorders, depression or depressed mood/self-esteem) are linked to the presentation of women in the media.
• Forty two percent of girls in grades 1-3 want to be thinner.
• Fifty three percent of 13-year-old girls are unhappy with their bodies.
• By the time they're 17, girls have seen 250,000 TV commercials telling them they should be aspire to be a sex object or have a body size they can never achieve.
• Seventy eight percent of 17-year-old girls are unhappy with their bodies.
• Thirty percent of high school girls and 16 percent of high school boys suffer from disordered eating.
• (Get ready... this one's mind-blowing). Adolescent girls are more afraid of gaining weight than getting cancer, losing their parents or nuclear war.
• Eating disorders have the highest mortality rate of all mental illnesses.

Truth in advertising matters because the widespread practice of routinely and materially misrepresenting the appearance of models in order to sell products and services is creating false and unrealistic expectations about what people should, can, and do look like. Advertisers don't even have the tip of a fig leaf over themselves on this issue. This is deceptive and damaging to our daughters (and to our sons, who are also influenced to believe girls can and should look like these advertisements, and who are starting to see male models photoshopped to unrealistic muscular proportions as well).

In addition to teaching your children to deconstruct false and harmful advertising messages and feel good about the bodies they are in, what can you do to attack this problem at the societal level?

1. Support the Truth In Advertising Act (HR4341) by calling or emailing your Congressmen and women.

2. Speak up. Let stores and the publishers of clothing catalogs and fashion magazines know that as a consumer and a parent, you do not approve of imagery that is known to lead to emotional and physical health issues for children.

4. For more information or to become a supporter of #TruthInAds, check out the Brave Girls Alliance.

5. Let your community know about what's going on, and ask them to (re)tweet, post, and pin -- as well as sign the materials posted on the Brave Girls site -- so the FTC and our US House (and soon Senate) sponsors know people are paying attention and care.

I've worked with teens who were hospitalized with eating disorders, and it is heartbreaking. Today's anorexic girls look to photoshopped images in magazines and online for the "thinspiration" they need to starve themselves. This is slow-motion suicide. Please, let's stop handing them the weapon.

Lori Day is an educational psychologist, consultant and parenting coach with Lori Day Consulting in Newburyport, MA. She is the author of the new book Her Next Chapter: How Mother-Daughter Book Clubs Can Help Girls Navigate Malicious Media, Risky Relationships, Girl Gossip, and So Much More.