I've noticed two things about the ad game. First, we're a business that - on the surface - changes and moves at a fast pace. As new technologies emerge brands are rightly inclined to ride the wave presented by each trend, thereby evolving their businesses against a changed fitness landscape. Some of these are big waves whereas others are smaller.

Yet - Second - as the waves break there are some steady truths that underlie the business that we're in: the need for scale, the significance of insights in gaining advantage, the importance of creativity and imagination. After all, humans are the constant in a world of changing technology.

As function of both of these dynamics, we're in an industry that is occupied with cracking the code: "How do I apply this tech?" "What's the insight?" "How did they do that?" "What is their secret sauce?"

And the truth is, the really good sauce, the super secret stuff, is often in our blind spots. The things that don't know that you don't know are often the most transformative. A recent article by the Fast Company points to the significance of seemingly random events as the birthplace of many category-changing companies, and the premise of Peter Thiel's book Zero to One is that all big companies should have a secret at their core. So, given the value of what we don't know, the question is: How can we improve our diets to include a bit more serendipity?

Ironically, there is a way you can plan for this. Introducing "unconferencing".

This is something introduced to me at WPP's Stream event, which has become an annual pilgrimage for me and many others, and it was originally conceived by Tim O'Reilly with Foo Camp. Before I share some of the nuggets this year's Stream event, here's a simplistic guide to how it works... 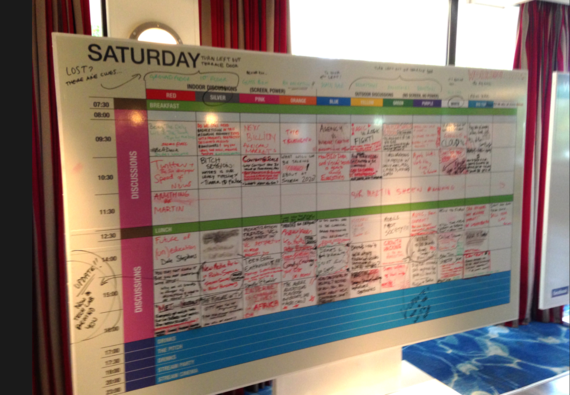 Here are some examples of what I took away from Stream this year...

In a discussion led by David Roter at Twitter and Amber Lee from Visual Country, we discovered how the inherent constraints in working with Vine and Twitter offer amazing organizational and creative stress tests for brands; these channels have merit beyond their reach. We discussed whether there was a need for these channels to try and provide standard formats in an age of such diversity, and the conclusion seemed to be "YES".

The variety of perspectives and the amount of progress you can make in a relatively short time, using this format, is impressive. And while it isn't a guaranteed way to get hold of the secrets we need in business to gain advantage, it's a great place to start.

NB. Although Stream is an invite-only event, they have a wild card competition each year offering four places based on merit. I look forward to seeing you there!