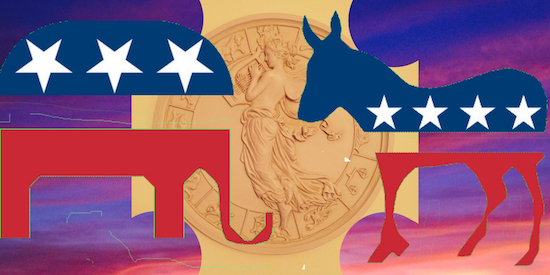 Do the planets affect what happens in politics? If so, what astro-logic should politicians be paying attention to now? We always have free will, yet, could there be something to the "intel" of planetary trends?

Which brings me to the issue at hand.

Regardless of which political candidates triumph in the 2016 USA elections, it's not a pretty picture of humanity. People know it. You know it, I know it, political pundits who make a living from it know it; we all know it. Then how can politicians re-gain the confidence and dare I say garner respect and admiration of We the People?

The wise politician will start paying attention to another big-time trend--planetary trends, AKA astro-logic. As one of America's greatest Founding Fathers, Ben Franklin said, "A word to the wise is sufficient." If you know what's trending, isn't it smart to be proactive and use the knowledge to your advantage?

Whether or not you think of astrology as a parlor game, fantasy or hoax, you are likely one of tens of millions who read their sun-sign astro forecast when you see it. Of course anyone in the "know" is aware that reading your sun-sign is like watching a trailer of Downton Abbey and thinking you've viewed the whole series.

The most famous person in the White House to consult astrologers was former
First Lady Nancy Reagan. After a cover article in Time magazine and coverage in other notable publications, the first couple had to hedge their comments to stave off a sensationalistic-hungry press, assuring them that no Reagan administration White House decisions were based in astrological data.

Full disclosure: I used to call astrology "my hobby." That way people who are vacant of any knowledge of astrology or its principles or results would refrain from heaping their uninformed judgments upon my character or me. And that way they feel okay about listening to what I have to say in the way of planetary wisdom. Because, as we all know, everybody wants a prediction about the future!

Not to disappoint, dear friends, but Astrology is not about predictions - it's about energy trends and cycles. Planetary energy trends are like cosmic memes. The intel of planetary bodies in their coordinated dance with one another set trajectories for what's trending in human society. We have antennae up for these memes. You and I experience these energetic trends though we may not be able to articulate exactly what's happening.

Despite the presence of some mystic DNA in each of us, an outdated 17th century Industrial Age worldview told us (quite erroneously) "only physical matter is real." Hence, "I'll believe it when I see it." We simply are not attentive to that which we cannot see. We don't see the planets with ordinary vision - however, they are there. They activate cycles for change and transformation and in fairly specific ways.

Note to Self: Planetary wisdom is live-streaming 24/7.

What has us focus on the military one year and on women's issues the next? Narrative topics of interest, styles of leadership--all energetically ordained by intelligent celestial bodies. History repeats. Fashion repeats. The planets orbit round and round and return to see what we've learned. It's a progression, an evolutionary cycle. It's powerful.

Case in Point: Restructuring
We are in a time of restructuring and rethinking unlike any we have witnessed or known. You don't need an astrologer to tell you this. We're surrounded by evidence of systems and structures reaching the limits of their effectiveness, and coming under the scrutiny of a public eye that doesn't quite know what to make of it or what to do about it.

Word to the Wise Politician: Your peeps are feelin' it. #planetary trends
Imagine you checked your astro intel and you already know we're in a time that is all about restructuring. Do you wait until you get walloped over the head with systems and structures breaking down before you act on it? Or ... or do you get smart and proactive on what needs to be re-structured now to leap us into to the modern Quantum Age?
Bob Marley's lyrics spring into consciousness: Could you be, could you be, could you be loved - by voters hankering for thoughtful leadership? In my Dad's favorite word: Indubitably!

The "CliffsNotes" on Planetary Trends and How They Affect Our World
To see more specifically how this works, let's flashback to 1995 astro-logic.

In 1995 Pluto went into Sagittarius. Pluto rules transformation on a large scale, affecting our collective humanity. Pluto digs up and crumbles what's no longer effective or needed to make room for the new to emerge. Pluto exposes what's not working. Sagittarius rules higher education, wisdom and knowledge-- religion, optimism, the future, and "foreign" affairs, i.e., cultures other than our own. Sagittarius rules excesses, too. So what happened in that planetary cycle between 1995 and 2008 in relationship to that cycle?

1995 began a banner era heralding exponential popularity and growth of the Internet and digital technologies. We were able to see into cultures around the world instantly and intimately like never before. Expansion was exploding in wonderful ways, and at the same time, financial foibles and executive excesses were exposed, resulting in the infamous downturn of 2008. Pluto in Sagittarius: The new system of the Internet brought the world together in unprecedented opportunity, and also revealed uber indulgences and failures of the system.

Word to the Wise Politician:
Okay, politicians, I get it - you want to do whatever you can to keep your job, to stay in power. Consider though, maybe, just maybe, it's time for a restructuring of your political strategy. Think of the joy of it: replacing partisan spin with planetary spin. Now that is truly tuning in.

1 Pluto in Capricorn - Restructuring Systems and Structures
Pluto transforms.
Capricorn rules systems and structures, government and corporations.
Digs things up and exposes what's not working - to make things better.
May not look so good along the way; you have to see the bigger picture.

Note to Political Self:
Time to re-assess the thinking of the 18th Century that created our nation and institutions, and make it relevant for the 21st Century.

2 Uranus in Aries - Authenticity in Leadership
Uranus rules the future, unexpected and/or sudden change.
Aries is asking us to express our identity in new ways, especially new leadership.
Authenticity rules. Zero tolerance for dictators and lack of integrity.
Freedom. Transparency.

Note to Political Self:
Forget the snooze button. Time to wake up and be real!

3 Saturn in Sagittarius - New Thinking for the Big Picture
New thinking, higher wisdom.
Serious yet optimistic.
Enthusiasm for going forward.
This is a real state change.

Note to Political Self:
Remind me again - what was it that Einstein said? Oh yeah ... "the problems we have cannot be solved with the same thinking that created them."
Take a quantum leap in thinking!

4 Neptune in Pisces - Faith in A New Vision
Create a new vision - have faith in something better.
Expect the unknown and have faith that it's all working for the best.

Note to Political Self:
Despite all "divisive" talk, The Force is with us: we really can create a new vision that brings about a better future for all.

5 Jupiter in Libra - All About Relationships
Opportunities for expanding harmony and cooperation in relationships.
Fairness, justice, and balance.

Note to Political Self:
Well, that's about as crystal clear as you can get.

6 Aquarius/ Leo Eclipses - Humanity in Service to Humanity - Passionately
Eclipses close old chapters and open new ones.
Move beyond the Either/Or habits that limit and divide.
Higher Mind stuff.
Look from the whole and for the whole.
Do what you love, with passion.

Note to Political Self:
We're all in this together, Ollie.
To paraphrase the wisdom of Buckminster Fuller,
"On spaceship Earth it's all of us making it, or none of us."

Note to Political Self:
How many more laws do we really need?
Instead of calling ourselves "lawmakers" - perhaps we best become "law managers."

"Astrology is not about predictions, however ... I predict LOL that one day soon - paying attention to astrological energy trends and cycles will be just as ordinary as paying attention to polls and spinmasters, and probably a bit more reliable."
-My friends call me, Madame Diva