We walked beside the now dusty wash that once contained the mighty but ever shifting Indus River, puzzling out the names of long-deceased members of royal dynasties now barely remembered. I was visiting the necropolis of Makli Hills with Yasmeen Lari, a conservation architect and herself a national treasure of Pakistan. The monuments at Makli chart the history of Islam in Sindh province, one of the cradles of civilization, dominated by the alluvial plain of the Indus, from which Sindh gets its name. I was there to announce that the U.S. Government is helping to conserve two of its most magnificent monuments. 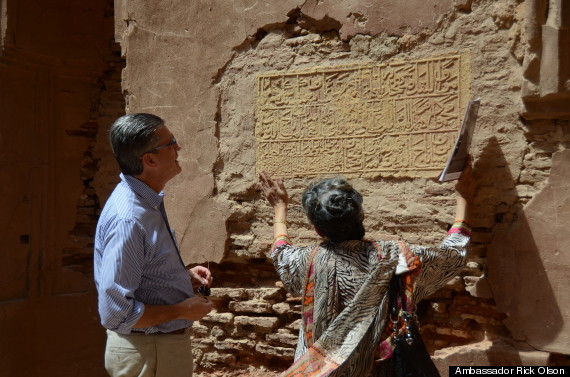 As the U.S. Ambassador to Pakistan, I live in a country facing political, military, and humanitarian challenges on many fronts. One front that has not received sufficient attention in Western media is the war on cultural heritage and how this matters to the people of Pakistan.

One of the ways in which ISIL has consolidated a reign of terror in Iraq and Syria is by erasing any heritage of religious diversity. Their atrocities are not confined to military battlefields. Groups like ISIS have another important ideological objective: they are threatened by the existence of a rich cultural heritage and a history of pluralism and tolerance. They seek to destroy it.

Islam came to Sindh in 711 c.e. via the invasion led by Muhammad bin Qasim. And its dominance on the culture was fixed by the Sufi scholars who accompanied the central Asian invaders of the 16th century. The history of this long conversion is etched in the stone of tombs at Makli Hills. The oldest ones, at the north, show a robust Hindu influence, including elaborate rosettes, with the inscriptions written in the austere Kufic script of early Islam. The later tombs, to the south, become more Persianate, with the slanting script replacing the more linear Arabic and more delicate floral and venial depictions. These ancient monuments enrich and inform today's Pakistan and connect us to our cultural origins.

Wind and sun have taken a severe toll on the monuments, as has vandalism and looting, all perhaps part of the toll that more than a decade of fighting terrorism has inflicted on Pakistan. Treasures of Moghul artistry lie scattered and broken on the ground. Some of the elaborate sepulchers have lost their foundations and are visibly splitting apart. Even the large tombs that are structurally intact have lost their turquoise tiled roofs and cladding and now reveal their baked brick skeletons.

Makli Hills demonstrates the value of the U.S. Ambassadors Fund for Cultural Preservation, a program that enables our ambassadors to identify at-risk cultural monuments in countries around the world. Since its inception in 2001, the fund has supported the preservation of cultural sites, cultural objects, and forms of traditional cultural expression in more than 100 countries. The fund has allowed me to support projects that help the conservation of the tombs of Sultan Ibrahim and Amir Sultan Muhammad at Makli Hills. The 14th-century saint Hazrat Shaikh Hammad Jamali is said to have uttered the words, Hadha Makka Li, "For me, this is Mecca," reportedly the origins of the site's name.

Our partner, the Heritage Foundation of Pakistan, headed by Yasmeen Lari, will conduct surveys to assess the structural and environmental damage to the two tombs, implement a program to conserve decorative features, and establish skills training and capacity-building workshops for artisans, students, and conservation personnel. The training will, we hope, contribute to longer-term efforts to preserve other Makli Hill architectural treasures. Preserving the cultural heritage sites of Pakistan goes hand in hand with preserving Pakistan's pluralistic identity and traditions.

For the United States, cultural heritage plays an important role in defining who we are and in protecting a country's identity and maintaining its economic vitality. Through the preservation of cultural heritage sites in Pakistan and other countries, the United States can demonstrate our support for the principles of tolerance and respect for diversity that residents of this region have lived by for centuries.