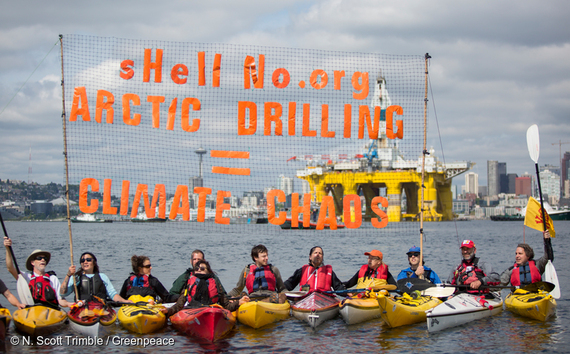 Today, President Obama's EPA announced the final version of the Clean Power Plan, a policy designed to limit the level of global warming pollution coming from U.S. power plants. This comes eight years after the Supreme Court ruled that EPA has the authority, and therefore obligation, to regulate the dangerous levels of greenhouse gas emissions now causing extreme weather events, sea level rise, and other problems related to our rapidly warming planet.

While the Clean Power Plan is an important step in federal regulations on climate pollution, it does not reach far enough.

On its own, the Clean Power Plan is depressingly insufficient and unambitious. And in the light of the Obama administration's disastrous desire to expand extraction and export of federal coal, oil and gas, it looks even worse.

President Obama clearly wants to be seen as a climate champion. He even seems to understand the dire timeline for radical action, as he said today "I believe there is such a thing as being too late." But this tepid EPA rule is one more indication that he may intend to lean more heavily on public relations than meaningful action. In light of his administration's proactive expansion of coal, oil, and gas projects, climate legacy marketing may be a losing strategy. However, this marketing approach is clear from EPA's own gross exaggeration of the impact of this rule.

The Obama administration has long played with numbers to create hype around the little it is doing on climate. One common trick is to change the base year used to calculate the impact of policies. In this case, EPA estimates the Clean Power Plan will result in a 32 percent reduction in carbon dioxide coming from power plants by 2030, based on 2005 levels. The problem with this estimate is that it is 2015 now and emissions have already fallen quite a lot. 2005 is the most convenient year to choose if you want to look good on climate policy since emissions may have never been higher.

While Obama's government certainly deserves some credit for falling greenhouse gas emissions, it is deceptive to include the reduction in emissions before this rule is implemented as an illustration of its impact. In reality, the impact of this rule won't be 32 percent but 20 percent—based on 2013 levels, the most recent year available from the EPA for carbon dioxide coming from power plants. The Greenpeace Energy [R]evolution report shows that is possible to do much more in the power sector by 2030. EPA could more than triple the reductions achieved by this rule.

What the Clean Power Plan Actually Does

The impact of the Clean Power Plan suffers from both timing and substance. With respect to timing, the implementation of the rule has now been pushed back to 2022. This means the Obama administration has decided it will not be a tool for meeting U.S. commitments for 2020, nor really for 2025, which were announced in the context of international climate negotiations.

As far as substance, the Clean Power Plan is actually the finalization of two proposed rules—one for future power plants and one for existing power plants. The rule for existing sources of pollution is the only one that matters for actually reducing climate pollution from today, or from 2022 as it were. What is missing is a limit on any existing power plant's emissions, since states are required to look at the average across 'fleets' of power plants. Interstate compliance will be allowed with as-yet non-existing trading regimes, which will be overseen by the states themselves, or industry if you're a cynic. The rule for future power plants is about avoiding increases in emissions. There is no required reduction in emissions from any type of power plant except future coal-fired units. Biomass is absent, while the limit for natural gas is effectively business as usual.

When it comes to the highest polluting fossil fuel—coal—the limit on pollution is only theoretical, because there likely won't be many more coal plants built in the United States, and second, because the EPA is promoting carbon capture for increasing oil extraction (CC-EOR) to deal with coal plant emissions. CC-EOR is presumed to be a stepping stone toward industrial development of carbon capture with permanent sequestration of carbon dioxide underground, but research into this notion commissioned by Obama's own Department of Energy has concluded this strategy is dubious. CC-EOR is likely worse for the climate than doing nothing, as our recent report Carbon Capture Scam report discusses. 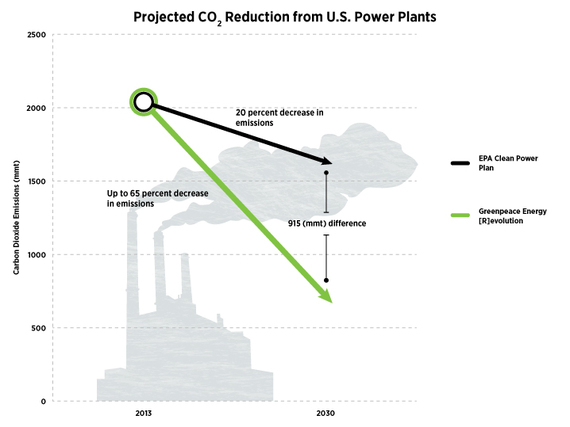 Opportunities Ahead for Climate Action

Fortunately for the President and the environment, he still has many opportunities to take stronger action on climate. The Clean Power Plan, while in need of improvement, is only one way that the U.S. can contribute to stopping global warming. The administration still could choose to favor the climate when making decisions on drilling in the Arctic Ocean, expanding offshore drilling in ultra-deepwater, coal mining on public lands, permitting coal exports, permitting exports of liquid natural gas.

At international negotiations in Paris later this year, the President should not just join but encourage all countries to sign a legally binding agreement to reduce climate pollution. Obama's State Department should arrive in Paris with an improved 2025 pollution commitment. Greenpeace analysis shows the U.S. can cut almost 40 percent of not just power plant emissions but economy-wide CO2 pollution by 2025 (under 2005 levels) while—compared with government forecasts of business as usual— increasing energy sector jobs and saving over a hundred billion per year in fuel costs.

If President Obama truly wants to be remembered as a climate leader, these are the types of ambitious moves he needs to make.