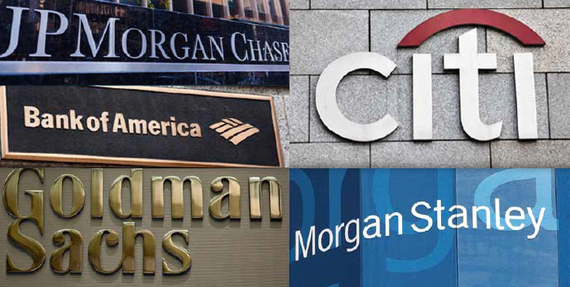 The handful of Wall Street's sprawling too-big-to-fail "banks" pose a unique, dangerous threat to America's families, workers, financial system and economy, which their "hide and disguise" strategy tries to conceal. They -- and they alone -- are capable of crashing the financial system and the economy, which is why they are too big to fail. This is a unique threat to the country and to the standard of living of every American. Preventing people from understanding that and from eliminating that risk is one of Wall Street's key goals. This "hide and disguise" strategy is also used to push their special interest agenda of killing, gutting and weakening financial reform.

Wall Street's handful of global too-big-to-fail megabanks try to hide their massive trading and gambling operations behind the many banks that are actually financing and supporting the real economy. Their strategy includes disguising their narrow special interests by claiming any criticism of them is an attack on all banks and bankers, when no one is actually doing that. Wall Street's megabanks are also hoping elected officials, policy makers, voters and the media ignore the bipartisan damage caused by the 2008 financial crash and broad support for stricter rules to reign in Wall Street's reckless and illegal actions.

Economic crises hurt tens of millions of American families, regardless of party affiliation. Many families saw this firsthand during the 2008 financial crash, as gigantic banks on Wall Street threatened their jobs, homes and savings and cost our economy more than $12.8 trillion. That's why a majority of the public -- not just a single party -- wants to be better protected from the dangers of Wall Street and avoid another financial calamity.

The cornerstone of the industry's PR strategy is to claim that their megabanks are just like all the other banks in the United States, and that those who support reducing Wall Street's dangerous practices are "bank bashing," "beating up on the industry" or "hammering the banks." But in reality, the criticism of Wall Street is very narrow and very focused on the handful of megabanks that pose a unique threat, not all "banks." In fact, there are about 6,500 banks in the U.S. and less than 20 pose a unique threat to the financial system, the economy and our standards of living. As Better Markets has documented, there's only 38 banks in this country with more than $50 billion in assets and only 29 with more than $100 billion in assets. In fact, there are only four banks with more than $1 trillion in assets.

These few megabanks pose a unique threat to our financial system and country. They've become so big, complex, leveraged, and interconnected to the entire financial system that their failure could cause the collapse of our economy, like we saw in 2008. These very few megabanks on Wall Street have become too big, too opaque and too dangerous, which is why many people are increasingly advocating for making them smaller, safer and simpler, just as has been done throughout history with everything from oil trusts to phone companies.

Wall Street's strategy of hiding their few very dangerous megabanks behind the many non-threatening banks does a disservice to the other 6,480 banks in this country that are supporting the real economy, creating jobs and, importantly, playing by the rules. These are the institutions that are working every day to fund and finance the American Dream of homes, small businesses, educations and retirements. Unlike the Wall Street megabanks, they are fulfilling their role of serving and supporting the economy and society, rather than threatening them.

So don't fall for industry's false claims that they are just like all the other "banks" and that criticism of the megabanks is "bashing" or even criticizing all banks. You'll see that the criticism is focused on the handful of reckless too-big-to-fail, too-big-to-jail Wall Street megabanks that caused the 2008 crash and stuck the American people with the bill, in the form of lost jobs, homes and savings. Right-sizing these megabanks and ending their special status will protect the American people, rebalance the banking and finance sectors and allow the roughly 6,480 other banks to continue supporting the real economy on a level playing field. That's good politics and good policy, which is why so many presidential candidates in both parties are talking about the unique threat posed by Wall Street's megabanks.