Throughout the years, I have heard arguments that there shouldn't be a Pride, that straight people don't get a day to march around being proud of their sexual orientation (that's every day of the year btw), and that gay people ruined the rainbow. When talking about pride, people get an image in their head about gay men, scantily clad on a float wearing leather chaps and dog collars. While this stereotype emerged from a minority of the gay community, it still holds a powerful image in minds eye of the general public. At the end of the day, people fear what they don't understand. They say their family is being threatened, and leave it at that. 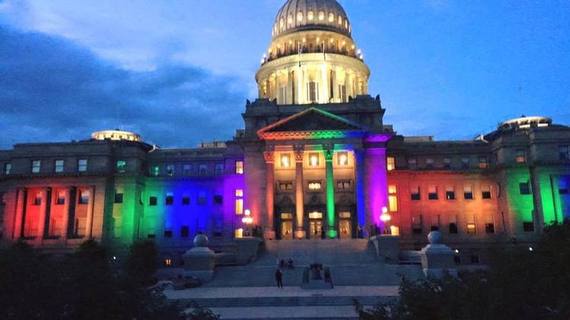 The Capital lit up in my (very) red state.

I went to my first pride in the mid-90's. I was working in a coffee shop downtown and the festival started going on outside the doors. I could see rainbows and giddy men everywhere. Boise was a much smaller town at the time, and there couldn't have been more than a couple hundred people that showed up shouting, "We're here! We're queer! Get used to it!" I remember feeling exhilarated for these beautiful people to have a voice. I had interviewed my friend Matt for my senior paper on homosexuality. He had the sweetest spirit of anyone. I asked him about the idea of Pride, and what it meant to him. He expressed relief that on this one day, out of the whole year- he felt he could be himself. That he didn't have to be on guard all the time, in fear for his own safety. That hit me. I think as a woman, I've always been aware of my own safety walking downtown, or parking lots. I had never thought of this man, having to watch his back every moment/day of his life. 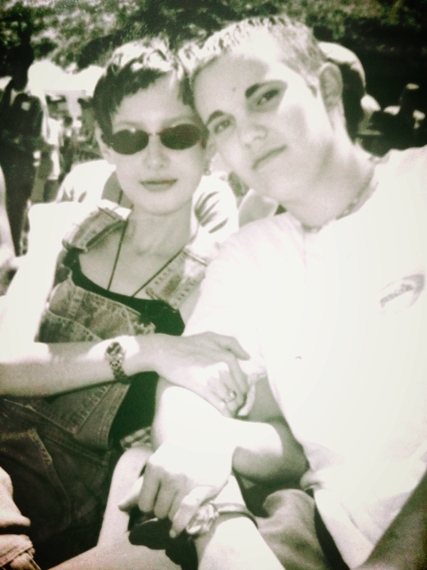 Pride 1997 with my lifelong friend Emmett

Sexual orientation and gender identity are such complex topics. There is a spectrum of each identity that can be broken down into smaller, and more intricate sub-groups. It seems almost infinite. Why is it so important for people to even identify as a specific orientation/gender? This society doesn't allow for difference of any kind. We are assigned gender at birth based on our physical characteristics, and given pink or blue rooms. Ballerinas or baseballs. It's a done deal. You get married to the opposite gender, have kids, and work until you die. This path is excruciating for people who don't fit that mold. Claiming an identity by simply stating the words "I'm gay," is liberating. It frees someone from the chains that bind them to this social construct of what "normal" looks like. Of course they want to celebrate PRIDE in who they are- especially if they have been told they are sinful or "less than" by loved ones, and churches their whole life. This space allows unconditional acceptance (FINALLY) and relief from wearing a mask at work, or walking down the street.

If you have been one of the blessed masses to enjoy the freedoms of living comfortably in a heterosexist (everything geared toward straight people) universe, you may not even know you have enjoyed these privileges. Have you ever been fearful to talk about your new crush with family/friends? Have you ever wondered if it was a safe place to kiss your partner? Have you ever worried if your kids would be bullied for who you're married to, or if you were welcome in a place of worship? I have loved without borders in this life. I have had my heart enraptured by both women and men. I will never understand why it matters who I share inside jokes and smooches with. Who I ask to clean the bathroom, or pick up milk at the store. It doesn't threaten anyone, OR their family. 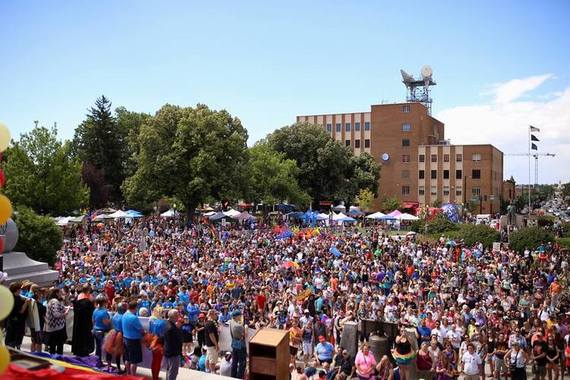 Largest Pride Boise has ever seen.

While the media urges us all to live in fear of ISIS, domestic terrorism and the state of politics in this election year, I refuse to let it swallow me. I know this world is spilling over with love. Yesterday, I attended the largest Pridefest Boise has ever seen. I found my eyes leaking as I looked around at the thousands of people singing in memory of the victims in Orlando. There was a sea of people in support of equality, safety, pride- gay and straight alike. Love will always win. My hope is that one day, my daughter can tell her children about the "olden" days when people were seen as separate. How society began to acknowledge their value, and their unique contribution to the world. How hate crimes became a thing of the past, and equality reigned. May this not be a dream, but pages to be written in history books. Happy pride everyone. Let your flag fly, my lovelies.