The fight for health care reform has this week been overtaken by the fight over the quality of the fighting, as the emerging point of debate becomes whether or not proponents of truly robust reform should "kill the bill" and start all over. Former DNC Chair Howard Dean has assumed the mantle of leadership for this position:

Naturally, there's been some pushback against "kill the bill," the most substantive of which has come from Nate Silver. He's run the numbers on how the Senate bill, in its current incarnation, will save money in certain specific instances: 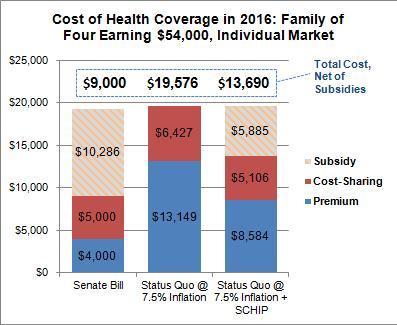 Now all that's left is for everyone in America to become a family of four, earning $54,000, that feels comfortable burning between $4K and $9K a year on health care costs! And, of course, this all gets mooted if insurance companies are allowed to continue the practice of rescission in some form or another -- which the current bill allows -- because then they can continue to throw you off their rolls if you actually get sick. Furthermore, it seems likely to me that Americans will continue to age and get sick, and will therefore continue to be subject to the premium increases that Howard Dean cited on this morning's edition of MSNBC's "Dr. Nancy" show as being part of the essential "fine print" of this bill.

Elsewhere, the case against killing the bill seems to be mainly founded in giving progressives a pat on the back for being around to ensure the health care reform bill wasn't an even larger, steamier pile of crap. The New Republic's Jonathan Cohn advances this idea, saying:

Disappointed progressives may be wondering whether their efforts were a waste. They most decidedly were not. The campaign for the public option pushed the entire debate to the left--and, to use a military metaphor, it diverted enemy fire away from the rest of the bill. If Lieberman and his allies didn't have the public option to attack, they would have tried to gut the subsidies, the exchanges, or some other key element. They would have hacked away at the bill, until it left more people uninsured and more people under-insured. The public option is the reason that didn't happen.

This is echoed by Ezra Klein:

A lot of progressives woke up this morning feeling like they lost. They didn't. The public option and its compromised iterations were a battle that came to seem like a war. But they weren't the war. The bill itself was. When liberals talked about the dream of universal health-care insurance 10, 20 and 30 years ago, they talked about the plight of the uninsured, not the necessity of a limited public option in competition with private insurers.

This sort of reminds me of all those filmmakers who make super-risque, NC-17 rated comedies as a means of getting their original R-rated vision past the MPAA. The problem here is that as a consumer, I don't get to buy the progressive "director's cut" of health care reform at Target a few months from now. And I'm pretty sure that public-option proponents saw the public option as a public option -- not as some Trojan Horse built to convey a ton of half-measures into the walled city of Congress.

Beyond that, I don't think this is a vision of policymaking that progressives should accept -- where their ideas are the cannon fodder that allow minimally effective policies to survive debate.

This is, however, where political discussion tends to get locked, in the media, to the detriment of effective policy and substantive discussion. Howard Dean and similar-minded policymakers get treated as a passionate activists, but not as "serious" experts. Americablog's John Aravosis makes a smart point about this pernicious dichotomy: "The implied criticism, between the lines (and perhaps not even intentional), is that activists don't know the substance of the debate, so of course 'they' think the bill is bad. But the 'experts' know better."

Similarly, being an activist means never receiving credit for being on the right side of an issue. By contrast, as we've seen time and again, being considered an "expert" allows you the opportunity to be wrong and wrong and wrong again and yet remain the more credible party in how the debate takes place on America's op-ed pages. When activists turn out to be right, this achievement is treated as an amusing coincidence -- based on something the high-toned "experts" just couldn't have foreseen!

"Activists" serve another purpose in our modern political discussion, and that is to serve as "the base" that wise politicians triangulate around to preserve their seats.

It's nice that the public-option activists are getting some attaboys from various wonky thinkers. But at the risk of getting all stark and moralistic, the aged and the infirm still cannot trade those sentimental compliments for actual health care. You get that, don't you, Ezra?

If killing the health care bill could actually result in progressives breaking out of the "cannon fodder/activist only" role into which they've been forced, then yeah, they ought to kill it.

But, if all progressives want to achieve is to give Obama the opportunity to hang his own 'Mission Accomplished' banner as the 2012 Election backdrop, I guess they should just hold their noses and kick this can down the road, again.